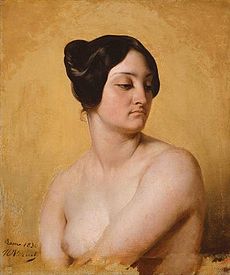 Study of Olympe Pélissier by Vernet for his Judith and Holofernes

Horace Vernet's Judith and Holofernes, for which Pélissier modelled

Olympe Pélissier (1799[1]-1878) was a French artists' model and the second wife of the Italian composer Gioachino Rossini. She sat for Vernet for his painting of Judith and Holofernes.

Under the Bourbon Restoration, Pélissier had been a notable figure in Parisian society, admired by the Comte de Girardin, holding salons attended by Baron Schikler, and in 1830 having a liaison with Honoré de Balzac.[2][3] She and Rossini first met in 1840, in the aftermath of his separation from his first wife Isabella Colbran, and Olympe began to cook for him and manage his business affairs, although they only married after Isabella's death in 1845, on August 16, 1846. She lived with him at his new house in the Passy suburb, and continued to do so until her own death.

In fiction, she appears in the 1974 French television film Eugène Sue,[4] played by Claudine Coster.