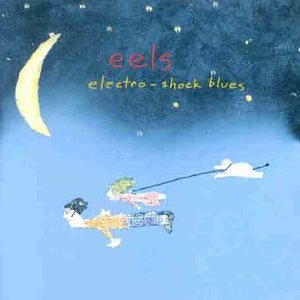 
"Electro-Shock Blues" is the second by the band Eels, released in 1998. Although not as commercially successful as some of their other records, the album is considered Eels's by most critics and fans. Fact|date=March 2008

"Electro-Shock Blues" was written largely in response to frontman 's (more commonly known as E) sister's and his mother's terminal . Many of the songs deal with their decline, his response to loss, and coming to terms with suddenly becoming the only living member of his family (his father having died of a heart attack in 1982; Everett, then 19 years old, was the first to discover his body).

Though much of the album is, on its surface, bleak, its underlying message is that of coping with some of life's most difficult occurrences. The record begins with "Elizabeth on the Bathroom Floor," a sparse piece composed of one of his deceased sister's final entries. Later, the album's emotional climax is reached in two tracks: "Climbing to the Moon", which draws upon E's experiences visiting his sister at a mental-health facility shortly before her death; and "Dead of Winter", a song about his mother's painful and slow succumbing. The album's last song, entitled "P.S. You Rock My World", is a hopeful bookend to "Elizabeth," containing subtley humorous lyrics that describe, among other things, an elderly woman at a honking her car at E, incorrectly assuming he is the attendant, and E's decision that "maybe it's time to live."

According to the Eels official website, the song "Baby Genius" is about E's father, Dr. Hugh Everett III, a quantum physicist who authored the "Many Worlds Theory".

The album was received very well by critics, gaining 4.5 (out of 5) stars from [http://www.allmusic.com/cg/amg.dll?p=amg&sql=10:misqoaeaiijb] . "" called "Electro-Shock Blues" "a brilliant work that combines often conflicting emotions so skillfully that you are reminded at times of the childhood innocence of , the wicked satire of and the soul-baring intensity of ." [http://www.amazon.com/dp/product-description/B00000DF6N]

However, fans of the band's heavily promoted hit single ("Novocaine For the Soul") taken from its more pop-friendly first album "" seemed to be put off by "Blues"'s sound and lyrics, sprinkled as they are with phrases such as "radiation sore throat got your tongue" and "they put the flower on the box / that's holding all the sand that was once you", due to which the album sold considerably less than "Beautiful Freak".

Singles for "Last Stop: This Town" and "Cancer For the Cure" were released, but also did nowhere as well as their predecessors, especially in the U.S. market.

The record has, though, gained cult status with fans, and is lauded by many to be the best album the Eels have recorded to date. In a recent review, labelled "Electro-Shock Blues" as "the greatest album ever put together" and that to disagree or be ignorant of this made the reader an "idiot." [http://www.stylusmagazine.com/articles/on_second_thought/eels-electro-shock-blues.htm]

Lineup and other information

At the time of the album's recording, the only official Eels members were E himself and drummer Butch Norton, as had left the band. Therefore, the recording features guest appearances by , , , and .

In addition to and cassette releases, "Electro-Shock Blues" was also offered on vinyl. This version included two 10" 33 RPM discs on see-through blue vinyl, limited to a small pressing.

"" was also featured in the soundtrack to the 1999 film, "American Beauty".

The song "Living Life" was played often on the "Electro-Shock Blues" tour, eventually seeing a studio release in 2004 on the tribute compilation "Discovered Covered - The Late Great Daniel Johnston".