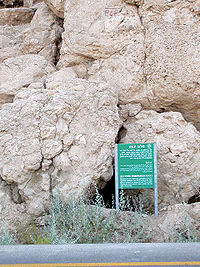 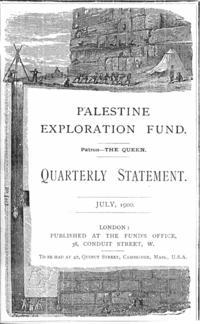 The Palestine Exploration Fund is a British society often simply known as the PEF. It was founded in 1865 and is still functioning today. Its initial object was to carry out surveys of the topography and ethnography of Ottoman Palestine with a remit that fell somewhere between an expeditionary survey and military intelligence gathering.[1] Consequently, it had a complex relationship with Corps of Royal Engineers,[2] and its members sent back reports on the need to salvage and modernize the region.[3]

The beginnings of the Palestine Exploration Fund are rooted in a literary society founded by British Consul James Finn and his wife Elizabeth.Finn, Elizabet. Reminiscences of Mrs. Finn. London. Marshall, Morgan,& Scott. 1929. p.252. Many photographs of Palestine have been kept from this period

On 22 June 1865, a group of Biblical archaeologists and clergymen financed the fund, with an initial fund of only £300.[2] The most notable of the founders were Arthur P. Stanley, the Dean of Westminster, and George Grove, who later founded the Royal College of Music and was responsible for Grove's Dictionary of Music. Its founders established the Fund "for the purpose of investigating the Archaeology, Geography, manners, customs and culture, Geology and Natural History of the Holy Land."[4]

The preliminary meeting of the Society of the Palestine Exploration Fund took place in the Jerusalem Chamber of Westminster Abbey. William Thompson, the Archbishop of York, read out the original prospectus at the first organisational meeting;

[O]ur object is strictly an inductive inquiry. We are not to be a religious society; we are not about to launch controversy; we are about to apply the rules of science, which are so well understood by us in our branches, to an investigation into the facts concerning the Holy Land. "No country should be of so much interest to us as that in which the documents of our Faith were written, and the momentous events they describe enacted. At the same time no country more urgently requires illustration ... Even to a casual traveller in the Holy Land the Bible becomes, in its form, and therefore to some extent in its substance, a new book. Much would be gained by ...bringing to light the remains of so many races and generations which must lie concealed under the accumulation of rubbish and ruins on which those villages stand ...[1][4]

The PEF conducted many early excavations of biblical and post biblical sites around the Levant, as well as studies involving natural history, anthropology, history and geography.

Among other noteworthy individuals associated with the fund were:

The Palestine Exploration Fund was also involved in the foundation of the British School of Archaeology in Jerusalem in 1919. The School worked with the Fund in joint excavations at Mount Ophel, Jerusalem in the 1920s. The School's second Director, John Winter Crowfoot, was Chairman of the PEF from 1945 to 1950[5].

Today the fund is located at 2 Hinde Mews, W1U 2AA, off Jason Court and Marylebone Lane north of Wigmore Street in Marylebone section of the City of Westminster, London. It holds regular events and lectures and provides annual grants for various projects. The PEF's offices also house collections of photographs, pictures, maps and various antiquities. The journal of the PEF devoted to the study of the history, archaeology and geography of the Levant is Palestine Exploration Quarterly which has appeared since 1869. There are currently three volumes published each year.