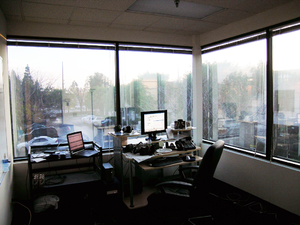 A corner office in Brea, California

A corner office is an office that is located in the corner of a building. Corner offices are considered desirable because they have windows on two exterior walls, as opposed to a typical office with only one window or none at all. (Note that offices occupying a corner of a building, but without windows, are not considered "corner offices.") As corner offices are typically given to the most senior executives, the term primarily refers to top management positions, such as the chief executive officer (CEO), chief financial officer (CFO), chief operating officer (COO), chief marketing officer (CMO), chief information officer (CIO), General counsel (GC) and the director of human resources. In organizations which do not use this corporate hierarchy, such as law firms and political parties, the corner office generally refers to the most senior partners or officials who are involved with corporate governance.