State Route 41 (SR 41) is a state highway in the U.S. state of California, connecting the Cabrillo Highway (SR 1) in Morro Bay with Fresno and Yosemite National Park via the San Joaquin Valley. Except between US 101 in Atascadero and SR 46 near Shandon, SR 41 is part of the California Freeway and Expressway System. It has been constructed as an expressway from near SR 198 in Lemoore north to the south part of Fresno, where the Yosemite Freeway begins, passing along the east side of downtown and extending north into Madera County.

Three segments — from SR 1 to US 101, SR 46 to SR 33, and SR 49 at Oakhurst to Yosemite (the Wawona Road) - are eligible for inclusion in the State Scenic Highway System, but none of the route has been officially designated as such.[2]

The majority of Route 41 runs as either two-lane rural highway or four-lane divided highway. The southern end of the freeway intersects SR 1 in Morro Bay. Between Morro Bay and Fresno, the highway intersects U.S. Route 101 in Atascadero, proceeds through the Coastal Range and intersects SR 46. Actor James Dean died in an accident at the intersection of SR 46 in Cholame. Currently, there is a memorial located there. The interchange is now called the James Dean Memorial Interchange. SR 41 then intersects Interstate 5 to the south of Kettleman City, and SR 198 just outside of the city of Lemoore. A large hazardous waste and municipal solid waste disposal facility operated by Waste Management, Inc. is located 5.6 km (3.5 mi) SSW of Kettleman City on the west side of the highway. The El Adobe de los Robles Rancho built by pioneer Daniel Rhoads can be found north of Lemoore.

SR 41 continues north into the city, then intersects SR 180 at a section of the latter route that links SR 41 to both SR 99 to the west, and to SR 168 to the east. North of Fresno, the route crosses the San Joaquin River, and enters Madera County near Children's Hospital of Central California. 8.5 miles (13.7 km) further north, Route 41 intersects with SR 145, before entering California's Sierra-Nevada mountain range. Route 41 continues through the towns of Coarsegold and Oakhurst, where it intersects with SR 49. Route 41 ends in Yosemite National Park to the north. 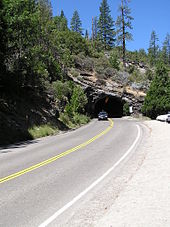 East portal of Wawona Tunnel near eastern terminus of SR 41

Tunnel View is a viewpoint located just outside the east end of the Wawona Tunnel in Yosemite National Park. It is located about 1.5 miles (2.4 km) from the Yosemite Valley. This is the first view that most people have of Yosemite Valley. There is an END-41 sign just south of the southern entrance to Yosemite National Park. The state routes within the park are not signed (with the exception of SR 120). Tunnel View is along Route 41's alignment, although state maintenance of the route ends at the south entrance of the park. 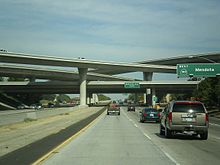 Northbound on Route 41 in Fresno at the Route 180 interchange

In 1930, the counties of Fresno, Kings, Kern, and San Luis Obispo considered organizing a joint highway district to construct a shortcut connecting Fresno with the Pacific Ocean at Morro Bay. This highway would pass through Kettleman City on its way to the Cholame Lateral (Legislative Route 33) near Cholame or Shandon, and then continue to Morro Bay, where a new harbor was being developed.[4][5] The entire length from Fresno to Morro Bay, as well as the Wawona Road to Yosemite, was added to the state highway system in 1933 as Route 125,[6][7] and subsequently improved by the state. In 1934, the state sign route system was established, and Sign Route 41 was designated along Route 125 from Yosemite south and southwest to Cholame and then west through Paso Robles to Cambria via Legislative Route 33.[8] The part of Route 125 southwest of Cholame instead became part of the new U.S. Route 466.[9]

By the 1950s, the short piece of US 466 (Route 125) between Creston and Atascadero had not yet been paved, and so US 466 was moved to the longer but better road via Paso Robles, replacing SR 41 to Paso Robles and overlapping US 101 to Atascadero. As SR 41 had not been signed over the unpaved road west of Paso Robles, it was truncated to Cholame.[10] US 466 was eliminated in the 1964 renumbering, becoming SR 46 east from Paso Robles. However, instead of going south and west to Morro Bay, SR 46 continued west to Cambria, and the road via Creston and Atascadero to Morro Bay (which had since been paved) became part of SR 41.[11][12]

In the 1980s, the urban stretch of 41 running through Fresno was upgraded to freeway standards, intersecting SR 99 to the south. In the late 1990s and early 2000s, the freeway portion was extended several miles beyond Fresno in both directions.