Apple of My Eye (Badfinger song)

Apple of My Eye (Badfinger song) 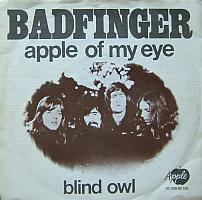 "Apple of My Eye" is a song recorded by the rock/pop band for inclusion on their 1973 album, "Ass." The song was written and sung by , produced by Chris Thomas and Badfinger, and released on .

Ham wrote the song about his mixed feelings upon the band's leaving Apple Records (which was the "" to Ham) to pursue a larger contract by moving to .

Due to Apple's financial chaos and its problems with the group, no new picture sleeve was created for the single, although some countries (such as the Netherlands, shown here) used a variant of the "Day After Day" sleeve. [ [http://apple.relocution.com/wiki/index.php?title=Apple_49 Scraping the Barrel: Apple 49] . Retrieved 4-30-2008.] It would become the original group's last single to chart in the U.S., although it peaked at a disappointing number 102 on Billboard's Pop Singles chart.

In most countries, ' "Blind Owl" was released as the B-side. However, in Japan, "Apple of My Eye" was backed with Mike Gibbins' song "Cowboy", and in the Philippines, Evans' "When I Say" was the B-side.