Windmills are powered by their sails. Sails are found in different designs, from primitive common sails to the advanced patent sails.

The jib sail is found in Mediterranean countries, and consists of a simple triangle of cloth wound round a spar. The mill must be stopped in order to adjust the reefing of the sail. Though rare in the UK, at least two windmills are known to have had jib sails (St Mary's, Isle of Scilly and Cann Mills, Melbury Abbas).

The simplest form of sail. In medieval mills the sailcloth was wound in and out of a ladder type arrangement of sails. Medieval sails could be constructed with or without outer sailbars. Post-medieval mill sails have a lattice framework over which the sailcloth is spread. There are various "reefs" for the different spread of sails; these are full sail, dagger point, sword point and first reef. The mill must be stopped in order to adjust the reefing of the sail.[1]

Spring sails were invented by Scottish millwright Andrew Meikle in 1772. The sail is divided into a number of bays, each having a number of shutters. All the shutters are joined together by a shutter bar, and the force required for the wind to open the shutters is adjusted by a separate spring on each sail. Although automatic in operation, the mill must be stopped in order to adjust the reefing of the sail.[1]

Roller reefing sails were invented by Stephen Hooper in 1789. As with spring sails, the sail is divided into a number of bays, each with a number of spars with cloth wound around them. The cloth is extended or retracted by a rod and lever system, and connected with a shutter bar on each sail. Adjustment of the roller reefing sail can be made without stopping the mill. This type of sail was popular in Yorkshire, although the only remaining mill with roller reefing sails intact is Ballycopeland Windmill in Northern Ireland.

In 1860, the English millwright Catchpole fitted an automatic air brake to the ends of patent sails. These were longitudinal shutters at the tip of each sail, which opened up if the wind got too strong, thus slowing the sail.[1]

In the Netherlands, the common sail predominates. During the nineteenth and twentieth centuries, Dutch millwrights developed the windmill sail to make it more efficient aerodynamically and operation easier in an effort to keep the traditional windmill economically viable in competition with factories and electric pumping stations.

The Dutch millwright A. J. Dekker improved on the efficiency of the common sail. The stock is given an airfoil shape by completely covering it with galvanised steel plates. Dekkerised sails provide enough surface area to be able to work the mill with no sailcloth spread if the wind is strong enough. As with the common sail, they are not adjustable except by adding more sailcloth. Some disadvantages of the Dekker system led millwright Van Bussel of Weert to invent a similar system, though with just a more rounded airfoil replacing the leading boards and not covering the stock itself.[1][2]

Invented by Dutch millwright Ten Have[3] of Vorden, Ten Have sails have a small number of wide longitudinal shutters, operating by centrifugal weights and often also by the miller at the tail of the mill similar to patent sails.[2] This way the sail can be adjusted without stopping the mill. The leading edge is commonly streamlined by the Van Bussel system. Ten Have shutters are normally only used on one stock as the wide Ten Have shutters standing open on a vertical stock would leave this stock vulnerable to side winds during a storm.

The Fok system, invented by engineer P.L. Fauël, was inspired by the jib on a sailing boat ('fok' is the Dutch word for jib). In this design the leading boards are replaced by a rounded profile of wooden slats in the form of a foresail leaving a small slot between this profile and the stock.[4] It's working principle can be compared to a leading edge slot on an aircraft wing. It enables the mill to work in a lower windspeed[5] but in variable windspeeds tends to make it difficult to have the mill run at a steady pace. For this reason it is often equipped with air brakes operating by centrifugal force.[2] The Fauël system is used in addition to common sails (see photo).

The Bilau system uses sails with an streamline covering of the stock, coupled with a full length air brake on the trailing edge, together forming an airfoil. The airbrake is opened by centrifugal weights in the sails but can also be operated by the miller similar to the patent system. When opening the airbrake disturbs the airfoil shape thereby slowing the mill.[2] It was invented by German airplane engineer Kurt Bilau early in the twentieth century and became quite popular in Germany where it was fitted to over 140 mills.[6] A similar system was invented by a millwright by the name of Van Riet of Goes where the leading edge and the airbrake together form a more complete airfoil.[1][2]

In France some mills have a system of longitudinal shutters running the length of the sail. The system is called Ailes Berton, which translates as Berton sails. These sails can be adjusted without stopping the mill. 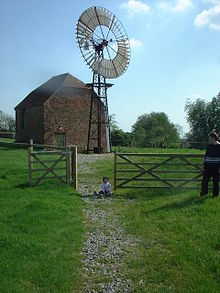 A few mills had annular sails, forming a circle. These sails utilised the patent system, enabling adjustment to be made without stopping the mill. One example of a mill with annular sails was at Feltwell, Norfolk.[7] Others are known to have existed at Haverhill, Suffolk,[8] Boxford, Suffolk and Roxwell, Essex.[9] Annular sails were also employed on large wind engines, such as the Titt engine at Crux Easton, Hampshire.

Sails are colloquially known as sweeps in Kent and Sussex, primarily due to the physical movement they perform and also that their construction does not necessarily involve sailcloth or canvas. Hence, patent sails are referred to as patent sweeps.