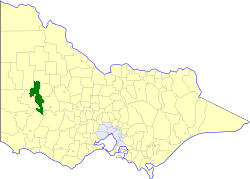 The Shire of Wimmera was a Local Government Area located in the region of western Victoria, . The shire covered an area of convert|2611|km2|sqmi|1, and existed from 1862 until 1995. Although its shire offices were located in Horsham, Horsham was governed by a separate city council.

Wimmera was first incorporated as a district on 3 March 1862, and became a shire on 4 March 1864. It was originally a very large district, including a significant portion of Walpeup, plus Arapiles, Dimboola, Dunmunkle, Kaniva, Kowree, Lowan, centred on the town of Horsham. By 1900, all of these areas had severed and separately incorporated, and Wimmera's boundaries remained largely unchanged for over 90 years.