The Leatherman (ca. 1839–1889) was a vagabond, famous for his handmade leather suit of clothes, who traveled a circuit between the Connecticut and the Hudson River from about 1856 to 1889. Although of unknown origin, he was thought to be Canadian, or possibly French, because of his fluency in French, his broken English and the French Language prayer book found on his person after his death. Although sometimes identified as Jules Bourglay, his identity remains controversial. 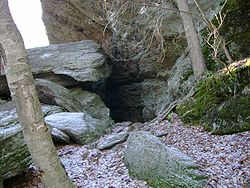 Entrance to the Leatherman Cave in Watertown, Connecticut

Living in rock shelters and "leatherman caves", as they are now locally known,[1] he stopped at towns along his 365 mile loop once every 34 days for food and supplies.[2] He was dubbed the "Leatherman" as his entire adornment, from hat, scarf, clothes to shoes were handmade of leather.[3]

Fluent in French, he communicated mostly with grunts and gestures, rarely using his broken English. When asked about his background, he would abruptly end the conversation.[4][5] Upon his death, a French prayerbook was found among his possessions.[3][5] He declined meat as food on Fridays, giving rise to speculation that he might be Roman Catholic.[6]

It is unknown how he earned money; although, one store kept a record of his order: "one loaf of bread, a can of sardines, one-pound of fancy crackers, a pie, two quarts of coffee, one gill of brandy and a bottle of beer".[3][7]

Leatherman was quite popular in Connecticut. He was reliable in his rounds, and people would have extra food ready for him, which he often ate on their doorsteps.[5][8] Ten towns along the Leatherman's route passed ordinances exempting him from the state "tramp law" passed in 1879.[1]

The Leatherman survived blizzards and other foul weather by heating his rock shelters with fire. The Connecticut Humane Society had him arrested and hospitalized in 1888, because of a spot on his lip which they thought was a result of the blizzard of 1888. He finally died from cancer of the mouth due to tobacco use, having escaped before he could be treated.[3][7] His body was found on March 24, 1889 in his Saw Mill Woods cave near Ossining, New York.[4] 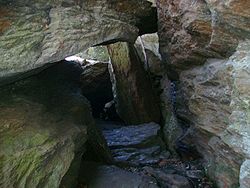 Inside the Leatherman Cave in Watertown, Connecticut

His grave is located at the Sparta Cemetery, Route 9, Scarborough, New York. The following inscription was carved on his former tombstone:

FINAL RESTING PLACE OF
Jules Bourglay
OF LYONS, FRANCE
"THE LEATHER MAN"
who regularly walked a 365 mile route
through Westchester and Connecticut from
the Connecticut River to the Hudson
living in caves in the years
1858–1889

The Leatherman's former tombstone read, "Final resting place of Jules Bourglay of Lyons, France, 'The Leather Man'…", and he is identified with that name in many accounts.[1][9] However, according to researchers, including Dan W. DeLuca, and his death certificate, his identity remains unknown. This name first appeared in a story published in the Waterbury Daily American, August 16, 1884, but was later retracted March 25, 26 and 27, 1889 and also in The Meriden Daily Journal, March 29, 1889.[2][8] DeLuca was able to get a new headstone installed, when the Leatherman's grave was moved away from Route 9 to another location within the cemetery on May 25, 2011. The new brass plaque simply reads "The Leatherman." [1]

His circuit took in the following towns:[4]

Many of the locations on Leatherman's route in Connecticut and New York have geocaches[13] as well as letterboxes[1] near them.