Fort Leonard Wood is a United States Army installation located in the Missouri Ozarks. The main gate is located on the southern boundary of St. Robert. The post was created in December 1940 and named in honor of General Leonard Wood, former Chief of Staff, in January 1941. Originally intended to train infantry troops, in 1941 it became an engineer training post with the creation of the Engineer Replacement Training Center.[1] In 1984, as part of the Base Realignment and Closure process, most of the US Army Engineer School's operations were consolidated at Fort Leonard Wood. Before that, officer training was conducted at Fort Belvoir Virginia.[1]

In 1999, again as part of the Base Realignment and Closure process, Fort McClellan Alabama was closed, and the US Army Chemical Corps and Military Police Corps schools were transferred to Fort Leonard Wood, which was concurrently redesignated the US Army Maneuver Support Center.[1]

The post is commonly referred to as "Fort Lost in the Woods of Misery" amongst soldiers and visitors due to its remoteness and distance from a major metropolitan center. Its location in the Ozark Mountains provides for field training in rugged terrain with extremes of heat, cold, wet, and dry by the season. 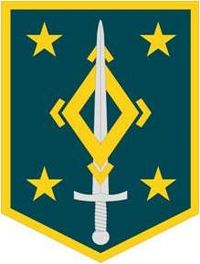 In 1928 on the Gettysburg Battlefield, troops from Camp Leonard Wood held two "experimental motorized force"[1] camps at The Wheatfield (July 31) and Pardee Field (May 27-8).[2] The installation has historically had a training role as a TRADOC (Training and Doctrine Command) rather than a FORSCOM (Forces Command) role dating back to its origins in World War II as an engineer replacement training post.[clarification needed] During the Gulf War, the 5th Engineer Battalion from the fort saw action.[3]

After the beginning of the current wars in Iraq and Afghanistan, the 94th Engineer Battalion was restationed from Germany to Fort Leonard Wood, as were the 92nd Military Police Battalion, 193rd Brigade Support Battalion, and 94th Signal Company (part of the 4th Maneuver Enhancement Brigade).[3] The 4th Maneuver Enhancement Brigade was activated at the fort on October 2, 2008.[3]

The Maneuver Support Center of Excellence offers Basic Combat Training for most non-combat arms soldiers; and AIT for MOS 88M (motor transport operator) also for MOS 74D (Chemical, Biological, Radiological, and Nuclear specialists). Non-combat engineer MOSes and OSUT training for combat engineers and bridging engineers (MOS 12B and 12C), and military police (31B & 31E). All training is gender integrated as in Fort Jackson, with the exception of combat engineers (i.e. MOS 12B is closed to women).[4]

The CBRN, Engineer, and Military Police schools provide Professional Military Education and functional courses for soldiers, Non-commissioned Officers, Warrant Officers, and Commissioned Officers, including but not limited to the Captains Career Course and the Battalion and Brigade Pre-Command Courses.[9][10][11]

Waynesville Regional Airport at Forney Field serves the community with air service; even though it's on Fort Leonard Wood, it is jointly run by the cities of Waynesville and St. Robert and is available for civilian use by private pilots and scheduled commercial passenger service.

The major east-west route is

Interstate 44; before that, the main highway was

Route 17. State-posted signs mark most of the alignment of the road.

Major attractions along U.S. Route 66 include the Old Stagecoach Stop in downtown Waynesville, which is now a museum but began as a tavern and boarding house and is the oldest standing structure in the county. It was used as a Civil War hospital for Union troops who were garrisoned above the city in Fort Wayne, which was demolished after the war. The Old Courthouse Museum in downtown Waynesville is near the Old Stagecoach Stop. Three bridges cross the Big Piney River at Devil's Elbow -- the modern Interstate 44 bridge, the later U.S. Route 66 alignment on Highway Z that was made possible by the Hooker Cut through a steep hillside, and the original U.S. Route 66 alignment on Teardrop Road that includes a historic bridge that's in the process of renovation. The Elbow Inn is a biker bar that's a frequent stop on the original U.S. Route 66 alignment.

Fort Leonard Wood also has its own post utility railway connecting to the national railway system. The rail system is operated by a contractor, Base Services, Inc., primarily carrying heavy equipment in support of the training center. Consisting of 27 miles of track, 18 of which connect the post with BNSF Railway at Bundy Junction, its operations are conducted from Monday through Friday, 0800 to 1600. The system uses two EMD GP10 locomotives numbered USA 4606 and USA 4607 and one GP40-2 numbered USA 4654. Previous motive power consisted of USA 2002 and USA 2024, EMD SW8 locomotives built in 1951 that had been used by Army railway operating battalions in Korea during the war. The post also had two GE 80-ton centercab locomotives for on-post switching.

Most of the main line between the post and Bundy Junction has a grade 1.5% grade, and in some places it reaches 3%. The grade is so steep that only 20 cars can be pulled at a time up or down the mainline. The line has four sidings used for storing rail cars. At one time the line had CTC signals, but today the signals and CTC equipment are long gone.

At one time, Fort Leonard Wood featured a busy rail operation. Not only did it receive vehicles and containers by rail, but also boxcars full of goods and equipment, coal for the base power plant, propane for various functions around post, and even diesel fuel for vehicles.

Today all that remains are half a dozen tracks with loading ramps on the ends, located in a warehouse area. In addition, there is a small staging yard next to the warehouses, an engine house and a small wye. The engine house was extended so that both locomotives can fit inside.

Fort Leonard Wood is in Pulaski County and a high percentage of military personnel live off post in surrounding communities, especially St. Robert and Waynesville but also the farther-out cities of Richland, Crocker, and Dixon, and the unincorporated communities of Laquey, Swedeborg and Devil's Elbow, all of which have a lower housing cost than nearer housing in St. Robert and Waynesville. Military personnel assigned to training areas on the south end of the post sometimes choose to live in the unincorporated areas of Big Piney and Palace in Pulaski County, or the northern Texas County communities of Plato and Roby.

KFBD-FM and its AM sister station, KJPW, are the dominant news radio providers in the Pulaski County area, which includes Fort Leonard Wood, Waynesville, and St. Robert. These stations compete with the only other station broadcasting from Pulaski County, KFLW Radio, owned by the Lebanon Daily Record [2] and working locally from the St. Robert offices of the Pulaski County Mirror [3] weekly newspaper.

The Daily Guide, commonly known as the Waynesville Daily Guide [7] but based in St. Robert and serving the entire county, is owned by Gatehouse Media [8] and is the central printing plant for three other Gatehouse newspapers in nearby counties, the daily Lake Sun, based in Camdenton, [9] and Rolla Daily News [10] as well as the weekly St. James Leader-Journal.[11]

The weekly Dixon Pilot [14] is privately owned by a resident of Dixon [15].

The Pulaski County Insider [17] is run by a group of St. Robert and Waynesville residents and maintained and hosted by a Potosi resident.

The Pulaski County Web [18] is run and maintained by a Devil's Elbow resident and former St. Robert businessman.

The cities of Waynesville and St. Robert and the Fort Leonard Wood army installation, along with their surrounding rural areas running east to Devil's Elbow, are served by the Waynesville R-VI School District[19] which is by far the largest in the county.

The cites of Richland, Crocker, and Dixon, along with their surrounding rural areas, are served by the Richland R-IV School Disrrict,[20] the Crocker R-II School District [21] and the Dixon R-I School District.[22] The Richland and Dixon districts both extend into rural parts of adjacent counties.

The unincorporated communities of Laquey and Swedeborg are served by the Laquey R-V School District [23] and the Swedeborg R-III School District.[24] Swedeborg is the county's last remaining K-8 district and most of its high school students attend Richland High School though some attend Crocker High School or Waynesville High School; all others serve students running from kindergarten through high school.

The areas south of Fort Leonard Wood, including the unincorporated Pulaski County communities of Big Piney and Palace, is served by the Plato R-V School District,[25] which is based in the northern Texas County village of Plato but also includes parts of Pulaski, Laclede and Wright counties.

On the morning hours of December 31, 2010, an EF3 tornado had touched down near the army base's training and cantonment area (east side of the base). It caused damage to many houses, government buildings, and even an old house built during the World War 2 Era. The most damage was in the North Piney Hills Housing Area. There were only minor injuries.[12] [13]