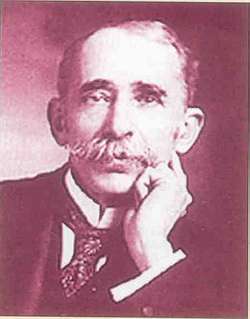 Sir John Ambrose Fleming (, - , ) was an English and . He is known for inventing the first or , the , then called the in 1904. [cite web|last=Harr|first=Chris|title=Ambrose J. Fleming biography|date=2003-06-23|work=Pioneers of Computing|publisher=The History of Computing Project|url=http://www.thocp.net/biographies/fleming_ambrose.htm|accessdate=2008-04-30] He also invented the , used in and . [cite web|title=Right and left hand rules|work=Tutorials, Magnet Lab U.|publisher=National High Magnetic Field Laboratory|url=http://www.magnet.fsu.edu/education/tutorials/java/handrules/index.html|accessdate=2008-04-30] He was born the eldest of seven children of James Fleming DD (d. 1879), a Congregational minister, and his wife, Mary Ann, at Lancaster, and baptised on . He was a devout Christian and preached on one occasion at in London on the topic of evidence for the . In 1932, along with and , he helped establish the . Having no children, he bequeathed much of his estate to Christian charities, especially those that helped the poor. He was an accomplished photographer and, in addition, he painted watercolours and enjoyed climbing in the .

Ambrose Fleming was born in Lancaster and educated at , London, and . He won a fellowship to in 1877, and went on to Lecture at several universities including the , the , and , where he was the first of Electrical Engineering. He was also consultant to the Marconi Wireless Telegraph Company, , , , and later the . In 1892, Fleming presented an important paper on electrical theory to the in .

Fleming started school at about the age of ten, attending a private school where he particularly enjoyed . Prior to that his mother tutored him and he had learned, virtually by heart, a book called the "Child's Guide to Knowledge", a popular book of the day - even as an adult he would quote from it. His schooling continued at the where, although accomplished at maths, he habitually came bottom of the class at .

Even as a boy he wanted to become an engineer. At 11 he had his own workshop where he built model boats and engines. He even built his own camera, the start of a lifelong interest in photography. Training to become an engineer was beyond the family's financial resources, but he reached his goal via a path that alternated education with paid employment.

He enrolled for a BSc degree at , graduated in 1870, and studied under the mathematician and the physicist George Carey Foster. He became a student of chemistry at the in in London (now ). There he first studied 's battery, which became the subject of his first scientific paper. This was the first paper to be read to the new (now the ) and appears on page one of volume one of their Proceedings. Financial problems again forced him to work for a living and in the summer of 2890 he became science master at , a , earning £400 per year. (He later also taught at .) His own scientific research continued and he corresponded with at . After saving £400, and securing a grant of £50 a year, in October 1877 at the age of 27, he once again enrolled as a student, this time at . Maxwell's lectures, he admitted, were difficult to follow. Maxwell, he said, often appeared obscure and had "a paradoxical and allusive way of speaking". On occasions Fleming was the only student at those lectures. Fleming again graduated, this time with a degree in chemistry and physics. He then obtained a DSc from London and served one year at as a demonstrator of mechanical engineering before being appointed as the first of and at the , but he left after less than a year.

In November 1904, he invented and patented the two-electrode vacuum-tube rectifier, which he called the oscillation valve. It was also called a , vacuum , kenotron, thermionic tube, or Fleming valve. The later invalidated the patent because of an improper disclaimer and, additionally, maintained the technology in the patent was known art when filed. [ [http://www.mercurians.org/nov98/misreading.html "Misreading the Supreme Court: A Puzzling Chapter in the History of Radio"] . November 1998, Mercurians.org.] This invention is often considered to have been the beginning of , for this was the first .Fact|date=May 2007 Fleming's was used in receivers and for many decades afterwards, until it was superseded by electronic technology more than 50 years later.

In 1906, of the U.S. added a control "grid" to the valve to create a RF detector called the "Audion", leading Fleming to accuse him of copying his ideas. De Forest's device was shortly refined by him and into the first electronic , a tube called the . The triode was vital in the creation of long-distance telephone and radio communications, radars, and early electronic digital computers (mechanical and electro-mechanical digital computers already existed using different technology). Fleming also contributed in the fields of photometry, , (radio), and electrical measurements. He was knighted in 1929, and died at his home in , in 1945. His contributions to electronic communications and were of vital importance in winning . Fleming was awarded the IRE Medal of Honor in 1933 for "the conspicuous part he played in introducing physical and engineering principles into the radio art".

:One century ago, in November 1904, John Ambrose Fleming FRS, at UCL, filed patent|GB|190424850| in Great Britain, for a device called the Thermionic Valve. When inserted together with a galvanometer, into a tuned electrical circuit, it could be used as a very sensitive rectifying detector of wireless currents, known as radio waves. It was a major step forward in the ‘wireless revolution’.

In November 1905, he patented the "Fleming Valve" (patent|US|803684|). As a rectifying diode, and forerunner to the valve and many related structures, it can also be considered to be the device that gave birth to modern electronics.

In the ensuing years such valves, were largely superseded by "s", and decades later most electron tubes, as they became generically known, were gradually replaced by diodes and transistors, which were significantly smaller, cheaper, and more reliable. In time and in turn, even these have been largely replaced by , better known as silicon chips.

Today, descendants of the original vacuum tube still play an important role in a range of applications. They can be found in the power stages of radio and television transmitters, in audio amplifiers, as detectors of optical and length radiation, and in sensitive equipment that must be "radiation-hard".

On the 27th November 2004 a (presented by the Institute of Physics) was unveiled at the "", , to mark 100 years since the invention of the Thermionic Radio Valve.