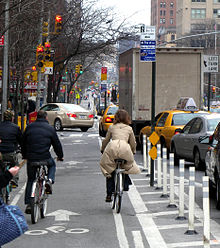 While New York had developed the country's first bike path in 1894,[2] and recent trends place the city "at the forefront of a national trend to make bicycling viable and safe"[2] — competing ideas of urban transportation have led to conflict as well as ongoing efforts to balance the needs of of cyclists, pedestrians and cars.[2]

The bicycle boom of the late 19th century had a strong impact on New York area, and the City of Brooklyn was especially responsive, providing accommodation in Eastern Parkway, Ocean Parkway, and elsewhere. New York didn't produce as many bicycles as other cities, so imported many from elsewhere, including Freehold Township, New Jersey. As a spectator sport, six-day racing was popular and spurred the building of velodromes in suburbs including Washington Heights, Manhattan, and Jersey City, New Jersey. Weekly races were held in suburban roads, including Pelham Parkway, Bronx. The biggest races were in inner city locations, notably at the original Madison Square Garden which had been designed for cycle racing and at the time was located adjacent to Madison Square. The Olympic sport, Madison Racing, is named after cycle races that became popular at Madison Square Gardens.

Several of the middle 20th century parkway projects of Robert Moses included bike paths. However, when more people could afford cars, bicycling declined and the bikeways fell into disrepair. New bridges connecting Queens to The Bronx, or Brooklyn to Staten Island, did not provide for bicycles or pedestrians.

Late in the century, bicycling resurged. A narrow, physically separated bike lane in Sixth Avenue in Midtown Manhattan had little success[3] and was eliminated but bike lanes on major bridges were created, refurbished, or improved, and the New York City Department of Parks and Recreation and other agencies created the Manhattan Waterfront Greenway and other land bikeways. 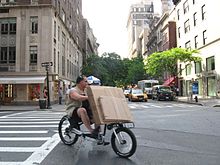 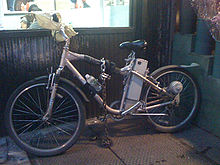 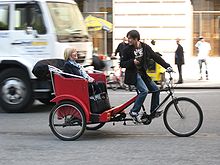 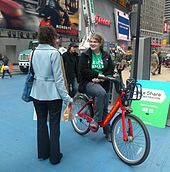 Pedicabs became commonplace at the turn of the 21st century, offering novel travel over short distances, including guided tours of Central Park. In April, 2007 the New York City Council voted to limit the number of pedicabs to 325.[5] A court overturned the limit,[6] later regulatory efforts concentrated on requirements for insurance and safety equipment[7] and in April 2011, new legislation tightened parking regulations and capped pedicab licenses at 850.[8]

In 2007 the Department studied the prospects of a bicycle sharing system[9] and announced in 2011 that kiosks would be built for the service to begin in 2012[10] with 10,000 bikes at 600 stations operated by Alta Bikeshare,[11] operators of Capital Bikeshare and similar schemes in other US cities.

Most cycling is in the same lanes as motor traffic, since most streets provide no separate facilities for bicycles. However, bikeways connect most neighborhoods. Those in parks are Greenways, segregated from traffic. The Hudson River Greenway is so heavily used that it requires separation of the bikeway from pedestrians. Other parts of the Manhattan Waterfront Greenway and the Brooklyn-Queens Greenway are less continuously segregated. A Greenway runs through Pelham Bay Park and across the Bronx along Mosholu Parkway to Van Cortlandt Park where it connects to the South County Trailway. Others include foreshoreways along the north shore of Jamaica Bay, the south shores of Little Neck Bay and Flushing Bay and other locations. 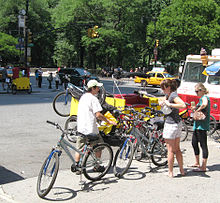 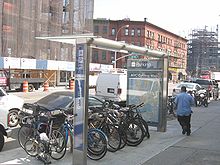 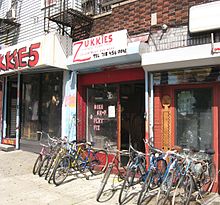 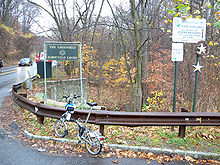 Parking near the Staten Island Greenbelt, a protected nature area

As of February 2009, about 170 miles (260 km) of painted lanes run in streets, and the network is growing.[12] Most street bike lanes are simply marked with paint and signage, and lie between a parking lane and a traffic lane. They are often blocked by trucks unloading and by double parked cars. A few, as in Tillary Street, Brooklyn, replace the parking lane and are separated from motor traffic by concrete barriers. The 8th and 9th Avenue bike lanes in Chelsea, Manhattan were rebuilt in late 2008 to lie between the curb and a new parking lane, and are expected to provide more safety.[13] Similar layouts were used on 1st and 2d Avenues in 2010, and on Columbus Avenue in 2011.

On three Saturdays in August 2008, a route on the East Side of Manhattan from Brooklyn Bridge to 72nd Street along Lafayette Street, Park Avenue and other streets was cleared of motor traffic to allow easy non-motorised use as an experiment called "Summerstreets". [14] It was repeated in 2009 [15] and became an annual event, including August 6, 13 and 20, 2011.

From mid-August 2008, two lanes of Broadway between 42nd Street and Herald Square were transformed into a pedestrian plaza and bike path.[16]

Appreciation of the new bike lanes in streets was not unanimous.[17][18] A group in Park Slope sued in March 2011 to remove a new bike lane.[19]

Some parks, including Central Park and Prospect Park, ban or restrict vehicles during certain weekday hours and all weekend to promote bicycling. A company operates bike rental stations in several city parks[20] and Local bike shops also rent them, especially in areas of tourism. Less formal operators work on street corners or out of the back of a truck or in parking garages. Additional services include paid guided tours.

New York City Department of Transportation distributes a free and annually updated bike map[21] through bike shops. The map shows Class 1 physically segregated Greenways in green, and street routes in other colors. It shows the locations and names of bike shops and points of touristic interest. Shops that rent bikes are shown in red.

Many New Yorkers live less than a dozen miles or 20 km from their job, and can be seen bicycle commuting over Brooklyn Bridge and along the Hudson or elsewhere in good weather. In 2008 the NYC Department of Transportation released a "screenline count report"[22] suggesting that commuter cycling had more than doubled since the turn of the century.

For mixed-mode commuting most suburban commuter rail stations provide free parking in racks, and some have bicycle lockers for security. Regulations on bicycles on trains vary by railroad and time of day. Bikes are allowed on New York City Subways at all hours, though crowding makes them difficult to handle. Rules against fastening bikes to subway property, including fences around street stairs, are enforced more rigorously than those concerning lampposts and other street furniture. Municipal bicycle stands are installed in many neighborhoods. Most are simple "bike staples" but a few, including one each at the northwest ends of Pulaski Bridge and Union Square are larger, with a roof. More are planned.[23]

Folding bicycles, which often allow parking in a workplace or home closet where there isn't room for a full sized bike, became increasingly popular early in the 21st century.[24] European city bikes from the Netherlands, though lacking this virtue, became a lesser trend in 2008.[25]

In 2009, a local law created by the New York City Council went into effect, requiring commercial buildings with freight elevators to allow employees to transport their bikes on them up to tenant floors. The purpose of the bill was to allow access to indoor storage spaces to encourage commuting by cycling.[26] The City Council also created another local law in 2009 requiring many off-street parking facilities to replace some of their spaces for vehicles with bicycle racks. So far there has been limited demand by cyclists for paid off-street bicycle parking at these garages and lots.[27]

A bicycle is considered a vehicle (with the exception that no license is required) in the State of New York and bicyclists follow traffic regulations. Cyclists must move in the direction of traffic, must use hand signals, must only wear headphones in one ear, [28] must not ride on sidewalks, and must use lights at night.[29] 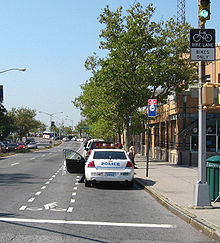 Many bike lanes are in the door zone

Being doored (to collide with the door of a car unexpectedly opened) is a prominent hazard.[30] Many painted bike lanes run in the door zone and cyclists must be vigilant for motorists and passengers unaware of the law forbidding opening a door into a traffic lane in a way to interfere with traffic, including bicycles. Dooring produces injuries, broken bones and sometimes death.

Approximately 20 cyclists are killed most years, usually by collision with a moving motor vehicle (including those who are knocked under wheels by a door). Some fatality locations are marked by white-painted ghost bikes. Traffic accidents kill approximately 160 pedestrians per year (about half as many as 20 years ago) and a lesser number inside cars.[31]

Critical Mass Ride and the NYPD

Critical Mass monthly rides in New York have turned into a conflict between the NYPD and bike riders. On 27 August 2004 during the Republican National Convention, more than 400 riders were arrested for 'disrupting traffic'.[32] The arrests, thought to preemptive action against protests during the convention, spawned law suits and courts have ruled that the rides are legal (c.f.[33]). Other rides were also followed by arrests[34], tickets[35] though the NYPD has been content to leave alone.[36]