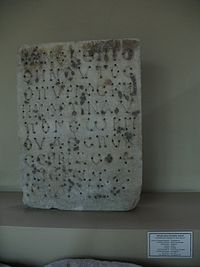 Marble plate of Đurađ Branković about reconstruction of the Walls of Constantinople in 1448, during the reign of Constantine XI Dragaš Palaiologos, today in Istanbul Archaeological Museum.

Đurađ Branković (pronounced [d͡ʑûrad͡ʑ brǎːŋko̞ʋit͡ɕ]) (Serbian Cyrillic: Ђурађ Бранковић; Hungarian: Brankovics György) (1377 – 24 December 1456), also known under the patronymic (Đurađ) Vuković and frequently called George Branković in English-language sources, was a Serbian despot from 1427 to 1456 and a baron of the Kingdom of Hungary. He was the first of the House of Branković to hold the Serbian monarchy.

His father was Vuk Branković and his mother was Mara, daughter of Knez Lazar Hrebeljanović, popularly known as Tsar Lazar. His wife was a Byzantine princess, Eirene Kantakouzene, a granddaughter of Emperor John VI Kantakouzenos.

During his reign the Serbian capital was moved to Smederevo (near Belgrade) after the Second Battle of Kosovo. After he was appointed as a successor for his uncle, Despot Stefan Lazarević, Branković's rule was marked by new conflicts and the fall of Kosovo and Metohia to the Ottoman Empire. Branković allied himself with the Kingdom of Hungary. In 1439 the Ottomans captured Smederevo, the Branković's capital. The prince fled to the Kingdom of Hungary where he had large estates, which included Zemun, Slankamen, Kupinik, Mitrovica, Stari Bečej, Kulpin, Čurug, Sveti Petar, Perlek, Peser, Petrovo Selo, Bečej, Arač, Veliki Bečkerek, Vršac, etc.

Following the conflicts that concluded 1443, Branković had a significant role in facilitating the Peace of Szeged (1444) between Kingdom of Hungary and the Ottomans. Murad II, who also desired peace, was married to Branković's daughter Mara.[1] On March 6, 1444, Mara sent an envoy to Branković; their discussion started the peace negotiations with the Ottoman Empire.[2] This peace restored his Serbian rule, but Branković was forced to bribe John Hunyadi with his vast estates. On 22 August 1444 the prince peacefully took possession the evacuated town of Smederevo.

The peace was broken in the same year by Hunyadi and king Władysław during the Crusade of Varna, which culminated in the Battle of Varna. Because of this he estranged from his Hungarian allies. A crusading army led by Regent John Hunyadi of Hungary was defeated by Sultan Murad II's forces at Kosovo Polje in 1448. This was the last concerted attempt in the Middle Ages to expel the Ottomans from southeastern Europe. Although Hungary was able to successfully defy the Ottomans despite the defeat at Kosovo Polje during Hunyadi's lifetime, the kingdom fell to the Ottomans in the 16th century. Branković also captured Hunyadi at Smederevo for a short time when he was going home from Kosovo in 1448. 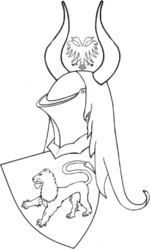 One of Djuradj's many Coats of Arms

Following Hunyadi's victory over the Mehmet II at the Siege of Belgrade on 14 July 1456, a period of relative peace began in the region. The sultan retreated to Adrianople, and Branković regained possession of Serbia. Before the end of the year, however, the 79-year old Branković died. Serbian independence survived him for only another year, when the Ottoman empire formally annexed his lands following dissension among his widow and three remaining sons. Lazar, the youngest, poisoned his mother and exiled his brothers, and the land returned to the sultan's subjugation.[3]

Branković was deemed by contemporaries as the richest monarch in all of Europe; the French knight Bertrand de la Broquierre stated the despot's annual income from the gold and silver mines of Novo Brdo (near Gnjilane in Kosovo) amassed to about 200,000 Venetian ducats. Among other of the Despot's sources of income, there are his possessions in the Kingdom of Hungary, for which expenses were covered by the Hungarian crown. The annual income from them alone was estimated to 50,000 ducats.