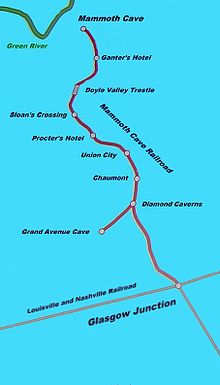 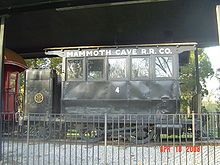 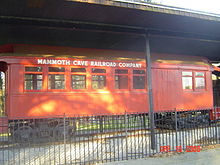 Mammoth Cave Railroad ("Dinkey Train")[1] was a short rail line with a small train off the Louisville and Nashville Railroad (L&N) that went to Mammoth Caves in Kentucky.[2][3] The tiny 9-mile (14 km) railroad[3] from Glasgow Junction (Park City) to Mammoth Caves was started in 1886 and operated for 45 years. The complete Dinkey Train consisted only of a "dummy" 0-4-2T type steam locomotive and a wooden coach to carry passengers and their luggage.[3][4] Among the many stops on the way to Mammoth Caves were Diamond Caverns, Grand Avenue Cave, Procter Cave and Hotel, Chaumont Post Office, Union City, Sloan's Crossing, and Ganter's Hotel.[1] The Dinkey Train could obtain speeds of 25–35 miles per hour on the lightweight rails.[1][3]

Between the ending of the Civil War and 1880 there were about 40,000 to 50,000 passengers annually of the L&N Railroad that stopped off at Glasgow Junction, and then took a stagecoach to Mammoth Caves.[5] Colonel Larkin J. Procter owned and operated this stagecoach line that began at Bell's Tavern. Procter also owned the Mammoth Cave Hotel and estate.

The Mammoth Cave Railroad was not built by the L&N, although it owned the railroad rights to Mammoth Caves. A contract was entered into between two companies whereby the L&N would lease its rights.[6] In 1874 Procter chartered the Mammoth Cave Railroad with his brother George and other investors. They leased the railroad rights to Mammoth Cave from the L&N Railroad. The new railroad acquired four used steam engine locomotives.[1] They were Baldwin "dummy" steam engines formally used on street railways in Memphis and Nashville, Tennessee.[7] They also acquired two wooden passenger coaches and two wooden combination coaches and baggage cars. Usually at any one time there were two sets of Dinkey Trains operating. The coach cars had open vestibules and were heated with a coal stove. They were always painted red.[5]

Before the actual construction work began the L&N agreed to lease the railroad rights to Mammoth Caves for 25 years from the completion of the spur railroad. The actual work on the railroad did not begin until 1880 when the first short part went to Diamond Cave.[5] Construction stopped again until July 1886 when Jim McDaniel and Henry Chapman resumed work on the roadbed.[8] The railroad officially opened for business in November 1886 under this 25 year lease from the L&N. It cost $3 per ticket when it first started running as is recorded in the Mammoth Cave Hotel register on November 8, 1886. The first passenger was a W. F. Richardson.[1] The hotel register reads

The cost of the entire Mammoth Cave excursion in 1913, including roundtrip railway fare, cave fees, hotel, and meals was $11.75. Also at this time there were additional services that included a side trip to Colossal Cavern for $1.50 and a bed inside a Pullman Sleeper for $1.75 (90 cents each if two occupied the space).[5]

The Mammoth Cave Railroad with the Dinkey Train ran successfully from 1886 until the mid 1890s, after which the L&N abandoned the line. The stockholders then reformed the company under the same name and assumed full control from the L&N in 1903.[5] In 1904 an Indianapolis judge drove the first car to the caves which represented the doom of the railroad line.[5] The establishment of the Mammoth Cave National Park in 1926 put the final nails into the coffin. The Dinkey Train discontinued service February 28, 1929.[5] It was replaced temporarily by a railcar for mail service until 1931 when it finally shut down permanently.[3][5][10] On the first of August 1931 the railroad ceased operations.[1][11]

The "steam dummy" locomotive filled up with water at Glasgow Junction before it made the 9-mile (14 km) journey pulling the coach up the Chester Escarpment, gaining 200 feet (61 m) in elevation about every mile. The two component train on the spur went through a series of hills and valleys. It would wind its way over a trestle at Doyle Valley and eventually come to Mammoth Cave hotel and estate. The train carried at least a three man crew that consisted of a train engineer to run the locomotive, a boiler man to stoke the engine, and a conductor to tend to the passengers. Many times there were up to seven employees to operate the railroad train. On rare occasions the train pulled additional cars besides the passenger coach. Most famous of the steam engine locomotives was number 4, which was called Hercules.[1][5]

The reason the small steam Baldwin locomotive was called a "dummy" was because it was boxed up to look like a passenger street car.[16][17][18] The idea was to prevent the horses from being spooked when it came close to them. Most times horses are very sensitive to mechanical machines and loud noises.[19] Its condensing engines operated without the noise of escaping steam.[1] It covered the mechanics of the rods, linkage, pipes, bolts, rivets, and most of the moving parts.[19]

The steam engine locomotive was made to look like an ordinary street car for other reasons as well. The mechanics were covered and boxed up in this manner because the raw engine parts were considered to be too brutish to be on city streets. These steam engine locomotives used at the Mammoth Cave Railroad were originally constructed in this "dummy" style by Baldwin Locomotive Works.[19]