An initial from the first page of the Leys d'amor

The Consistori was founded by seven literary men of the bourgeoisie, who composed a manifesto, in Old Occitan verse, pledging to award prizes to poetry in the troubadouresque style and emulating the language of classical period of the troubadours (roughly 1160–1220). The academy was originally called the Consistori dels Sept Trobadors ("Consistory of the Seven Troubadours") or Sobregaya Companhia dels Set (VII) Trobadors de Tolosa ("Overjoyed Company of the seven troubadours of Toulouse"). In its efforts to promote an extinct literary koiné over the evolving dialects of the fourteenth century, the Consistori went a long way to preserving the troubadours' memory for posterity as well as bequeathing to later scholarship an encyclopaedic terminology for the analysis and historiography of Occitan lyric poetry. Chaytor believed that the Consistori "arose out of informal meetings of poets held in earlier years".[2]

The Consistori was governed by a chancellor and seven judges or mantenedors (maintainers).[3] In 1390 John I of Aragon, one of the earliest Renaissance humanists to sit on a European throne, established the Consistori de Barcelona in imitation of the Toulousain academy.[4][5]

The Consistori held an annual poetry contest at which one contestant, the "most excellent poet" (plus excellen Dictador), would receive the violeta d'aur (golden violet) for the poem or cançó judged the best.[6] The other prizes, awarded for particular poetic forms, were similarly floral, leading later scholars to label the competitions the Jocs Florals. The best dança earned its creator a flor de gaug d'argen fi (a fine silver marigold),[7] and the best sirventés, pastorèla or vergièra garnered a flor d'ayglentina d'argen (a silver dog rose).[8]

The first prize was rewarded on 3 May 1324 to Arnaut Vidal de Castelnou d'Ari for a sirventes in praise of the Virgin Mary. The contests were held intermittently until 1484, when the last prize was awarded to Arnaut Bernart de Tarascon. From this period of 160 years survive the record of around a hundred prizes[9]. During that century and a half, the Consistori saw participants from both south of the Pyrenees and north of Occitania, both men and women. In an unknown year, possibly 1385, an anonymous Catalan woman submitted a planh to the seven maintainers for judgement. The planh (lament) is that of a faithful woman for her lover, who has been absent several years.[10]

It was in order to judge these contests that the Consistori first commissioned an Occitan grammar, including the laws of poetry, be written up. The first compiler was Guilhem Molinier, whose Leys d'amor was completed between 1328 and 1337. It went through two subsequent redactions. Several other grammatical treatises and glosses were produced by poets associated with the Consistori. 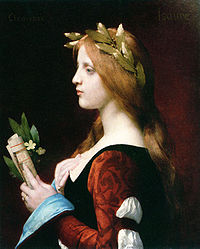 By 1471 the Consistori was losing its Occitan character. It awarded the golden violet to Peire de Janilhac n'ostan qu'el fos Francés, per so que dictec e·l lengatge de Tholosa: notwithstanding that he was French, because he composed in the language of Toulouse.[11] In 1513 the Consistori was transformed into the Collège de rhétorique et de poésie françaises: the College of French Rhetoric and Poetry. In 1554 the College awarded a silver eglantine rose to none other than Pierre de Ronsard, the greatest French poet of his generation, for his Amours. During the Enlightenment, Fabre d'Églantine received his name from the dog rose the academy bestowed on him at the jeux floraux (floral games). In 1694 the Consistori was reborn as the Académie des Jeux Floraux, founded by Louix XIV. Later, Victor Hugo received a prize at the jeux. It still exists today.

The Consistori, in its reactionary attempt to preserve what had gone out of style, is often credited with fostering a monotonous form of poetry devoid of vibrance and feeling.[12] Partly, however, this can be blamed on the Inquisition and the fear of being labelled immoral or, worse, a heretic. Courtly love, with all its adulterous and extramarital connotations, was a rarer theme with troubadours associated with Toulouse than religious themes, especially Marian. Even on religious themes, however, their work lacks the "force" of the last troubadours of the thirteenth century, like Cerverí de Girona, who wrote much on such themes.[13] The Toulousains lacked originality and for that reason their accomplishments have been undervalued by later generations. Their isolation and their classicism cut them off from the literary movements giving life to other vernaculars, such as the dolce stil novo and the Renaissance in Italian and the work of Ausiàs March in Catalan.

Martí de Riquer is highly critical of the escòla poetica de Tolosa, which he charges with a thematically severely limited, weighed down by a narrow conception of art and imposing strictures governing poetic form and content, negatively influencing Catalan poetry by exporting occitanisms (until Italian trends wafted over the western Mediterranean sea routes to rejuvenate it), and sustaining an outmoded literary language. He compares it to French neoclassicism and its "tyranny of the monotonous alexandrine".[14]

It is the inspiration for Friedrich Nietzsche's The Gay Science, 1882. It is the namesake of the Italian folk group Gai Saber.