Innate Intelligence is a term to describe the organizing properties of living things. It was originally coined by , the founder of chiropractic. This vitalistic concept states that all life contains Innate (inborn) Intelligence and that this force is responsible for the organization, maintenance and healing of the body. Historically, chiropractors believed that they removed the interference to the (by way of a ) and that when the spine is in correct alignment, Innate Intelligence can act, by way of the nervous system, to heal disease within the body.

It was presented by early chiropractic leaders as a part of chiropractic philosophy, that life is a triune of intelligence, force, and matter. Modern chiropractors study these principles in college and these ideas are seen as historical references to early chiropractic philosophy and science. Chiropractors — in common with all other healthcare professionals — recognize that the body has intrinsic healing abilities. Describing this healing ability as an "Innate Intelligence" is unique to chiropractic. Because of this early metaphysical construct, the terminology of Innate Intelligence is considered potentially detrimental to the profession's development and reputation as it seeks acceptance in the greater . 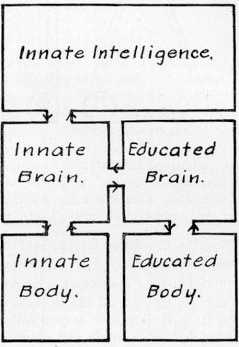 thumb|right|200px|"The most valuable drawing in the world for it solves all the problems of man."(BJ Palmer) the diagram originally appeared inStephenson’s Chiropractic Textbook.The concept of Innate Intelligence was expanded upon by BJ Palmer in the numerous books he wrote. Originally, it was taught as the "law of life", comparable to the or the "non-conscious brain", or what causes . "However, by not later than 1906 the father of chiropractic had converted these adjectives into nouns, more precisely, proper names"

:"Education, so far as health problems and religious theories are concerned, works from outside in; from below upward. Universal Intelligence and Innate Intelligence work from above downward, within outward. Palmer Vol. 22 1949 pg. 56

:"Various terms can be synonymously used, such as force, energy, power, electricity, mental impulse, nerve force, etc., depending upon whether we refer to the activating agent external to or the motivating agent internal to the human body." Palmer Vol. 22 1949

The concept of Innate Intelligence can have different meanings to different people for what it describes.

*Innate as synonym for homeostasis - "This is considered the most common interpretation by chiropractors".

*Innate as a label for our ignorance - There is much that is unknown about human physiology, hence, unexplained phenomena are sometimes attributed to "Mother Nature", or "viz medicatrix naturae" (Latin for the healing power of nature).

*Innate as vitalistic “explanation” - If using a vitalistic philosophy, innate can be used to give a name to that which creates the vital force, often a "part" of God.

*Innate as metaphysical premise - "When used as an "a priori" assumption, rather than as a hypothetical construct".

The term "Innate Intelligence" (sometimes abbreviated "II") is still used by certain chiropractors. At Palmer College of Chiropractic the definition of Chiropractic states, "Chiropractic philosophy begins with the principle that the human organism has an innate power to maintain its own health" and includes "This unique health care approach views the body as having an innate, natural ability to adapt to changes in its internal and external environments and maintain itself in a state of health."

Similarly at Life University, they have "embraced the idea that humans are spiritual beings whose lives are directed by universal laws including the natural, vitalistic, innate ability to develop, heal and adapt as long as the body is kept free of interferences."

One of the most notable groups placing the most emphasis [ [http://www.google.com/search?hl=en&q=site%3Awww.f-a-c-e.com+innate+intelligence&btnG=Google+Search Innate Intelligence on the F.A.C.E. website] ] on the body's Innate Intelligence is the Foundation for the Advancement of Chiropractic Education (F.A.C.E.).

In his book on the philosophy, art, and science of chiropractic, Virgil Strang, D.C., chiropractic philosopher and the seventh President of Palmer College of Chiropractic, discusses his thoughts on homeostasis:

:"We know that homeostasis involves negative feedback. We even know some of the mechanisms entailed. But this knowledge does not really touch the deeper mystery of how the body "thinks" physiologically: sensory information must be endlessly "integrated" and efferent activity "determined".

:The stringing together of mechanisms cannot be expected to capture the overall reality of organic, dynamic activity. Classic mechanistic thinking is rooted in the notion that the parts explain the whole. This is true of mechanistic processes such as gearing or even electronic computing. But as Aristotle observed, nature is a world of purpose. In such a world, mechanisms are merely the instruments through which superimposing purposes work their will.

:It is this marvelous, innate(inborn), "purposeful" nature which is the predominant, practical reality behind the mechanisms of homeostasis."

The use of the "Innate Intelligence" concept is controversial within the chiropractic profession, and is seen by many in the profession as antiquated metaphysical jargon which has no reference to reality. It is also a part of the "straight" vs. "mixing" battle that has been going on since the inception of chiropractic.

:"So long as we propound the 'One cause, one cure' rhetoric of Innate, we should expect to be met by ridicule from the wider health science community. Chiropractors can’t have it both ways. Our theories cannot be both dogmatically held vitalistic constructs and be scientific at the same time. The purposiveness, consciousness and rigidity of the Palmers’ Innate should be rejected."

:"Belief in 'immaterial' intelligences is a matter of faith, not of science. What I can say with some certainty is that such concepts have no constructive role to play within the realm of natural philosophy. Innate Intelligence fails as a hypothetical construct because it is not testable, and fails as a metaphysical assumption in that it has not been productive in any unique way in the generation of testable hypotheses. Nevertheless, II may be true, on some spiritual level."

Lon Morgan, DC, a reform chiropractor, expressed his criticism in this way:

:"Innate Intelligence clearly has its origins in borrowed mystical and occult practices of a bygone era. It remains untestable and unverifiable and has an unacceptably high penalty/benefit ratio for the chiropractic profession. The chiropractic concept of Innate Intelligence is an anachronistic holdover from a time when insufficient scientific understanding existed to explain human physiological processes. It is clearly religious in nature and must be considered harmful to normal scientific activity."