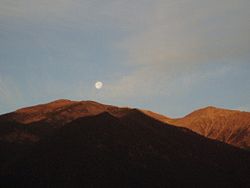 Mount Antero (pronounced /ænˈtɛroʊ/) is the eleventh highest peak in Colorado, with an elevation of 14,276 feet (4,351 m). Also known as Antero Peak[3], it is named for Chief Antero of the Uintah band of Utes. It is located in the central Sawatch Range in Chaffee County between the towns of Buena Vista and Salida. The mountain itself is prized for its gemstone deposits and has one of the highest concentrations of aquamarine in the country. There are several active private mining claims being exploited on Mt. Antero and surrounding peaks.

The peak is located entirely within the San Isabel National Forest, due south of the more visually prominent Mount Princeton. There are two popular climbing routes on Mount Antero. The generally accepted hiking route, which begins near the ghost town of St. Elmo, is from the east starting at the Browns Creek Trailhead and paralleling Little Browns Creek to its upper reaches where it crosses Forest Road 1A, then following the road near to the summit. The other route follows the same forest road from the north up Baldwin Creek. This route has heavy mining and tourist traffic in fair weather during the summer months.

The peak was surveyed by the Pike Expedition in 1806. A forest service sign at the Browns Creek trailhead commemorates the expedition camp at the eastern base of the peak.