Dendrophylax lindenii, the Ghost Orchid - not to be confused with the Eurasian Ghost Orchid (Epipogium aphyllum) - is a perennial epiphyte from the orchid family (Orchidaceae). Other common names include Palm Polly and White Frog Orchid. Formerly classified under Polyrrhiza this orchid has recently been moved to the genus Dendrophylax.[1]

The database World Checklist of Monocotyledons of Kew Botanical Gardens at present considers Dendrophylax lindenii as the accepted name, while Polyrrhiza lindenii is considered as a homotypic synonym.[2]

Its specific epithet "lindenii" is derived from its discoverer, the Belgian plant collector Jean Jules Linden who saw this orchid for the first time in Cuba in 1844. Much later it was also discovered in the Everglades in Florida. 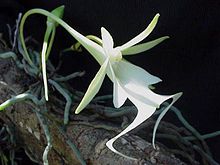 This orchid is an epiphyte, anchored in a network of large, tangled mass on a tree. It is found in moist, swampy forests in southwestern Florida and Cuba.

This is an endangered orchid in the wild. Cultivation outside of its native environment has proven exceptionally difficult, but not impossible. Although many fail in the attempt to raise seedlings grown in sterile culture into adult plants, some have succeeded[3]. This orchid is listed on the Appendix II of CITES and is fully protected by Florida state laws and should not be removed from the wild.

This orchid is an exceptional monocot, as it consists of a greatly reduced stem and the leaves have been reduced to scales. The bulk of the plant consists only of flat, cord-like, green roots with distinctive "track marks". These roots are used for moisture absorption and their chloroplasts for photosynthesis. The outer layer, the velamen, takes care of acquiring the nutrients and the water uptake. It also protects the inner layers.

This orchid is a distant relative of the African and Indian Ocean genus Angraecum; it seems that orchid seed, blowing like dust, crossed the Atlantic at least once and successfully colonized new habitat.

This orchid blossoms between June and August, with one to ten fragrant flowers that open one at a time. The white flower is 3–4 cm wide and 7–9 cm long and is borne on spikes arising from the root network. During its peak fragrance emittance in the early morning, the scent is fruity, resembling an apple. The lower petal produces two long tendrils that twist slightly downward, resembling the back legs of a jumping frog. Its bracts are scarious - that is, thin, dry, membranous, and paperlike.

Since the roots of this orchid blend so well with the tree, the flower often seems to be floating in midair, hence its name of "Ghost Orchid".

The Ghost Orchid seems to prefer Annona glabra (Pond-apple) trees, or on occasion Fraxinus caroliniana (Pop Ash) trees, being from eye-level to only a few feet above eye-level[citation needed].

Pollination is done by the giant sphinx moth, the only local insect with a long enough proboscis. In this regard it may be said to be the America's answer to the Madagascar orchid Angraecum sesquipedale, which led Charles Darwin to predict that a long-tongued species of moth would be found to fertilize it. Years later the moth responsible was discovered: Morgan's hawk moth Xanthopan morgani.

The plant plays a pivotal role in the non-fiction book The Orchid Thief, and the movie based on the book, Adaptation. The ghost orchid of Blair Audubon Corkscrew Swamp Sanctuary also inspired the fiction novel, Ghost Orchid.