Rudolph Carl Virchow (13 October 1821 – 5 September 1902) was a German doctor, anthropologist, pathologist, prehistorian, biologist and politician, known for his advancement of public health. Referred to as "the father of modern pathology," he is considered one of the founders of social medicine.

From a farming family, he studied medicine and chemistry in Berlin at the Prussian Military Academy from 1839 to 1843[1] on a scholarship. When he graduated in 1843, he went to serve as Robert Froriep's assistant at the Charité Hospital. The campus where this hospital is located is named after him, the Campus Virchow Klinikum. In 1847, he qualified as a lecturer at the University of Berlin, and he was associated with Benno Reinhardt in founding the Archiv für pathologische Anatomie und Physiologie und für klinische Medizin, world-famous as “Virchow's Archives,” which he edited alone from Reinhardt's death in 1852 until his own.[1]

Virchow is credited with multiple important discoveries. Virchow's most widely known scientific contribution is his cell theory, which built on the work of Theodor Schwann. He is cited as the first to recognize leukemia cells.[2] He was one of the first to accept (and plagiarize[3][4]) the work of Robert Remak who showed that the origins of cells was the division of preexisting cells.[5] He did not initially accept the evidence for cell division, believing that it only occurs in certain types of cells. When it dawned on him that Remak might be right, in 1855 he published Remak's work as his own which caused a falling out between the two.[3] This work Virchow encapsulated in the epigram Omnis cellula e cellula ("every cell originates from another existing cell like it.") which he published in 1858. (The epigram was actually coined by François-Vincent Raspail but popularized by Virchow.)[6] It is a rejection of the concept of spontaneous generation, which held that organisms could arise from non-living matter. It was believed, for example, that maggots could spontaneously appear in decaying meat; Francesco Redi carried out experiments which disproved this notion and coined the maxim Omne vivum ex ovo ("every living thing comes from a living thing" — literally "from an egg"), Virchow (and his predecessors) extended this to state that the only source for a living cell was another living cell.

Another significant credit relates to the discovery, made approximately simultaneously by Virchow and Charles Emile Troisier, that an enlarged left supra-clavicular node is one of the earliest signs of gastrointestinal malignancy, commonly of the stomach, or less commonly, lung cancer. This has become known as Virchow's node and simultaneously Troisier's sign.

Virchow is also known for elucidating the mechanism of pulmonary thromboembolism, coining the term embolism. He noted that blood clots in the pulmonary artery originate first from venous thrombi, stating: "The detachment of larger or smaller fragments from the end of the softening thrombus which are carried along by the current of blood and driven into remote vessels. This gives rise to the very frequent process on which I have bestowed the name of Embolia." Related to this research, Virchow described the factors contributing to venous thrombosis, Virchow's triad.

Furthermore, Virchow founded the medical fields of cellular pathology and comparative pathology (comparison of diseases common to humans and animals). His very innovative work may be viewed as sitting between that of Morgagni whose work Virchow studied, and that of Paul Ehrlich, who studied at the Charité while Virchow was developing microscopic pathology there. One of Virchow's major contributions to German medical education was to encourage the use of microscopes by medical students, and he was known for constantly urging his students to 'think microscopically'. 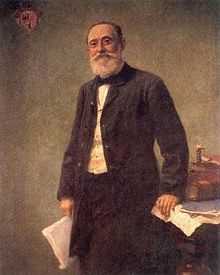 Virchow also developed a standard method of autopsy procedure, named for him, that is still one of the two main techniques used today. More than a laboratory physician, Virchow was an impassioned advocate for social and political reform, stating that "Medicine is a social science, and politics is nothing else but medicine on a large scale. Medicine, as a social science, as the science of human beings, has the obligation to point out problems and to attempt their theoretical solution: the politician, the practical anthropologist, must find the means for their actual solution....The physicians are the natural attorneys of the poor, and social problems fall to a large extent within their jurisdiction." His views are evident in his Report on the Typhus Outbreak of Upper Silesia (1848), where he states that the outbreak could not be solved by treating individual patients with drugs or with minor changes in food, housing, or clothing laws, but only through radical action to promote the advancement of an entire population.[7] He is widely regarded as a pioneer of social medicine,[8] and anthropology.[9]

In 1869 Virchow founded the Society for anthropology, ethnology and prehistory (Gesellschaft für Anthropologie, Ethnologie und Urgeschichte) which was very influential in coordinating and intensifying German archaeological research, and of which he was several times president. In 1879 he made a journey to the site of Troy, described in Beiträge zur Landeskunde in Troas (1879) and Alttrojanische Gräber und Schädel (1882).[1] In 1885 he launched a study of craniometry, which gave surprising results contradictory to contemporary scientific racist theories on the "Aryan race", leading him to denounce the "Nordic mysticism" in the 1885 Anthropology Congress in Karlsruhe. Josef Kollmann , a collaborator of Virchow, stated in the same congress that the people of Europe, be they German, Italian, English or French, belonged to a "mixture of various races," furthermore declaring that the "results of craniology" led to "struggle against any theory concerning the superiority of this or that European race" on others .[10]

In 1861, he was elected a foreign member of the Royal Swedish Academy of Sciences. In 1892 he was awarded the Copley Medal. Among his most famous students was anthropologist Franz Boas, who became a professor at Columbia University.

Virchow died of heart failure. He was buried in the St Matthews Cemetery in Schöneberg, Berlin. 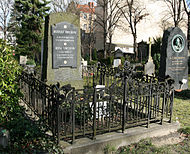 Virchow famously delivered an anti-Darwinian lecture on human and primate skulls, in which he emphasized the lack of fossil evidence for a common ancestor of man and ape. 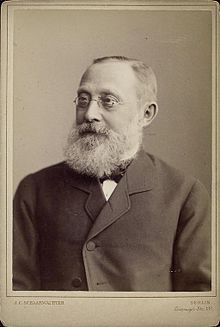 Rudolf Virchow as a public figure.

Virchow made himself known as a pronounced democrat in the year of revolution, 1848, and his political activity caused the government to remove him (1849) from his position, but he was soon reinstated. He became a member of the Municipal Council of Berlin in 1859, and began his career as a civic reformer. Elected to the Prussian Diet in 1862, he became leader of the Radical or Progressive party; and from 1880 to 1893 he was a member of the Reichstag.[1] He worked to improve the health care conditions for the Berlin citizens, namely working towards modern water and sewer systems. Virchow is also credited with the founding of "Social Medicine", frequently focusing on the fact that disease is never purely biological, but often socially derived or spread.

As a co-founder and member of the liberal party (Deutschen Fortschrittspartei) he was a leading political antagonist of Bismarck. He was opposed to Bismarck’s excessive military budget, which angered Bismarck sufficiently to challenge Virchow to a duel in 1865.[1] Virchow declined.

One area where he co-operated with Bismarck was in the Kulturkampf, the anti-clerical campaign against the Catholic Church[11] claiming that the anti-clerical laws bore "the character of a great struggle in the interest of humanity".[12] It was during the discussion of Falk’s May Laws (Maigesetze) that Virchow first used the term.[13]

Virchow was respected in Masonic circles,[14] and according to one source[15] may have been a freemason, though no official record of this has been found.

He was a very prolific writer. Some of his works are: