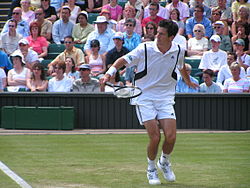 Tim Henman is a serve-and-volleyer well-known around the tennis community for his excellent "touch".

A volley in tennis is a shot in which the ball is struck before it bounces on the ground. Generally a player hits a volley while standing near the net, although it can be executed farther back, in the middle of the tennis court or even near the baseline.

The primary objective of the volley is to go on the offensive and cut the amount of time for the opponent to react. Another advantage is that a player eliminates any possibility of a bad bounce from an uneven surface such as on some grass and clay courts. Also, if near the net, a volleyer has a wider choice of angles to hit into the opponent's court. However, quick reflexes and hand–eye coordination are required to execute this shot. The primary means of countering a volley are the passing shot and the lob.

Generally, a player who advances to the net in the serve and volley type of game will make the initial volley fairly near the service line. The player will then move closer to the net in hopes of making a put-away volley for a winning point. It is difficult to hit an effective volley in the area between the baseline and the service line, consequently this is often called "no man's land".

A regular volley is hit with a short backswing and a punching stroke. While standing at the net, a player usually has no time to take a long backswing. When the ball comes at less pace, though, the volleyer can take a longer backswing to impart more force on the ball, which is called a swing volley.

The lower the ball comes at the volleyer, the harder it is to hit an effective volley. In some cases, a player is better off to let the ball bounce rather than attempt to volley it, then hit it on the rise right after the bounce. This is called a half volley (although technically it is not a volley) and is one of the most difficult shots in tennis; John McEnroe was considered a master of it.

Another type of volley is the drive volley. This is hit with more backswing and followthrough than a normal volley. Effectively this is a volley groundstroke and a very aggressive shot, giving your opponent less time, which can be used as a way to approach the net (approach shot).

In his 1979 autobiography, Jack Kramer, who had a fine volley himself, devoted a page to the best tennis strokes he had ever seen. He wrote:

FOREHAND VOLLEY—Wilmer Allison of Texas, who won the 1935 Forest Hills, had the best I ever saw as a kid, and I've never seen anyone since hit one better. Budge Patty came closest, then Newcombe. BACKHAND VOLLEY—Close among Budge, Sedgman and Rosewall, with Sedgman getting the edge probably because of his quickness. Schroeder and Trabert were almost as outstanding.

Among open era (post 1968) male players, John McEnroe is generally regarded as being the finest and most natural volleyer, though some consider Stefan Edberg or Tim Henman to have been equally proficient. Patrick Rafter and Pete Sampras are also regarded as having had two of the finest volleys in recent times.

Among open era female players, Martina Navrátilová is considered to be the outstanding volleyer. Jana Novotná was also noted for her superior volleying skills.

Other male players known for their superior volleying skills include:

Female players known for their superior volleying skills include: