The Beast of Yucca Flats

The Beast of Yucca Flats 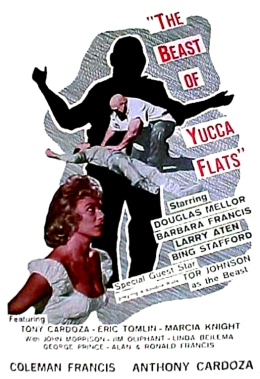 "The Beast of Yucca Flats" is a B released in 1961. The film starred Swedish former wrestler and was both written and directed by . This film was featured on the television series "". Some critics have characterized this film as one of the worst sci-fi films of all time, even suggesting that it may be more poorly conceived and executed than 's "" [cite web|url=http://www.jabootu.com/beastyucca.htm|title="The Beast of Yucca Flats"|last=Begg|first=Ken ]

The film opens with an unnamed woman being strangled after finishing a shower. The purpose of the scene is unclear, although the actor portraying the murderer was doubling for Johnson's character. [http://www.bmonster.com/scifi37.html] This scene is followed by Joseph Javorsky (), a noted Soviet , arriving in in the after defecting. Javorsky is carrying a briefcase with various military secrets; the film's narrator () alludes to information about a Soviet landing specifically.

As Javorsky disembarks from his plane, he and his American contacts are attacked by a pair of assassins ( and John Morrison). While the Americans stay to fight off the KGB agents, Javorsky flees into the desert, walking for (presumably) a great distance, and removing much of his clothing. Too late, it is revealed that he has wandered in range of an American nuclear test. The transforms Javorsky into a mindless beast (the Beast). He proceeds to kill a couple in their car on a nearby road, prompting pursuit from two police officers named Jim Archer (Bing Stafford) and Joe Dobson (Larry Aten).

Meanwhile, a vacationing family ventures along the same road. After stopping at a service station to feed soda to s in a pen, the family's two young sons (Ronald and Alan Francis) wander off into the wastelands where they eventually encounter and escape from the Beast. Their father (Douglas Mellor) searches for them, but is mistaken for the killer by one of the police officers, searching for the murderer from the air in a small plane. The officer opens fire on the innocent man, who escapes after being repeatedly shot.

Eventually the family is reunited and the police shoot and kill the Beast. A wild rabbit appears and nuzzles the Beast's lifeless body.

* The film opens with the murder by strangling of a woman who has just gotten out of the and is thus - it is implied that the killer sexually abuses her corpse. The identity of the murderer is never revealed and the murder is never discussed after that scene. The murderer is dressed like Javorsky after the blast, but this murder is never mentioned during the actual film, nor is there any apparent place in the narrative where it could be said to occur. According to an interview with Anthony Cardoza, the scene was added after the film was complete because Coleman Francis liked nude scenes.
* The movie was filmed entirely silent. Narration, voiceovers, and some sound effects were added in post production. To avoid having to synchronize the audio to the picture, characters only speak when their faces are either off-screen or not clearly visible due to darkness or distance. Likewise, during scenes in which firearms are used, the muzzles of the guns are usually out-of-shot when the weapons are fired, presumably for similar sound-syncing reasons. [cite web|url=http://www.bmonster.com/profile37.html|title=Anthony Cardoza's Tor of the Desert|last=Weaver|first=Tom|publisher=bmonster.com]
* During scenes of gunplay, many characters appear at first to have suffered life-threatening wounds, then appear to have inexplicably recovered and show no visible signs of having been wounded.