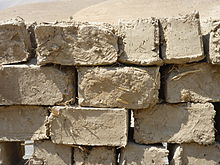 Mudbrick was used for the outer construction of Sumerian ziggurats—some of the world's largest and oldest constructions. Choqa Zanbil, a 13th century BC, Elamite, ziggurat in Iran is similarly constructed from clay bricks. 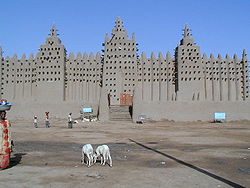 The Great Mosque of Djenné is a well-known Mosque that is located in Djenné, Mali. It was made with mudbrick and is the largest mudbrick structure in the world. 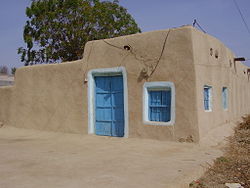 A mudbrick is a firefree brick, made of a mixture of clay, mud, sand, and water mixed with a binding material such as rice husks or straw. They use a stiff mixture and let them dry in the sun for 25 days[citation needed].

In warm regions with very little timber available to fuel a kiln, bricks were generally sun dried. This had the result that their useful lifespan is reduced to around thirty years. Once a building collapsed, new bricks would have to be made and the new structure rebuilt on top of the rubble of the decayed old brick. This phenomenon is the primary factor behind the mounds or tells on which many ancient cities stand. In some cases they extended the life of mud bricks by putting kiln dried bricks on top or covering them with stucco.

Adobe is a type of mudbrick also used today to save energy and is an environmentally safe way to insulate a house. This type of house tends to stay cool in the summer and warm in the winter.[1]

The Great Mosque of Djenné, in central Mali, is the world's largest mudbrick structure. It, like much Sahelian architecture, is built with a mudbrick called Banco: a recipe of mud and grain husks, fermented, and either formed into bricks or applied on surfaces as a plaster like paste in broad strokes. This plaster must be reapplied annually.[2]

The South Asian inhabitants of Mehrgarh constructed, and lived in, mud brick houses between 7000–3300 BCE.[3] Mudbricks were in use in the Near East during the aceramic Neolithic B period. The Sumerians used sun-dried bricks in their city construction;[4] typically these bricks were flat on the plano-convex mudbricks. Some bricks were formed in a square mould and rounded so that the middle was thicker than the ends.

In Minoan Crete at the Knossos site there is archaeological evidence that sun-dried bricks were used in the Neolithic period (e.g. prior to 3400 BC).[5]

Mudbricks were used to some extent in pre-Roman Egypt, and mudbrick use increased at the time of Roman influence.[6]