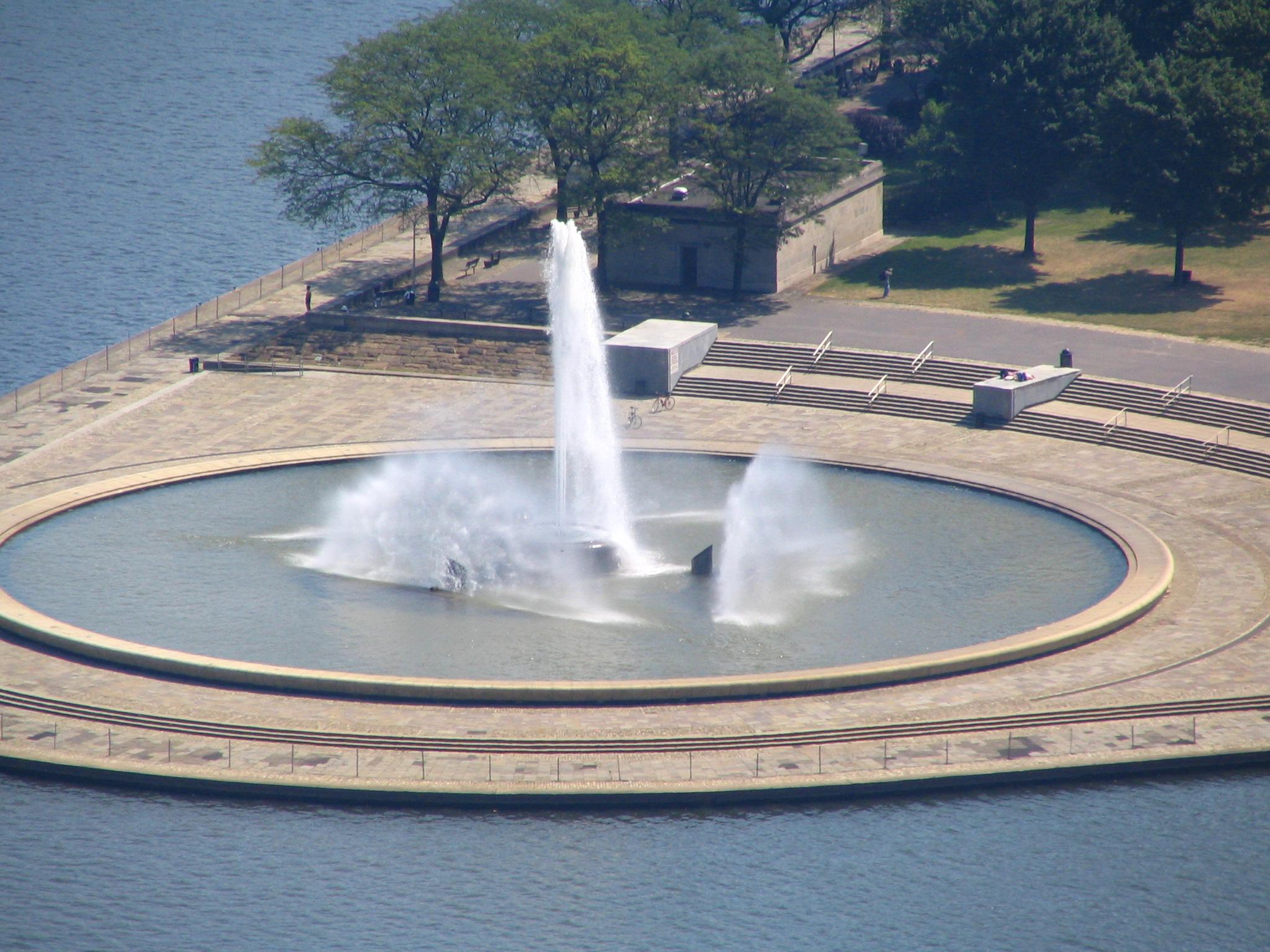 Point State Park is a Pennsylvania state park on convert|36|acre|km2|2 in Downtown Pittsburgh, Allegheny County, , USA, at the confluence of the Allegheny and Monongahela rivers, forming the .

Built on land acquired via from industrial enterprises in the 1950s, the park opened in when construction was completed on its iconic fountain. Pittsburgh settled on the current design after rejecting an alternative plan for a designed by .

The park also includes the outlines and remains of two of the oldest structures in Pittsburgh, Fort Pitt and . The , housed in the Monongahela of Fort Pitt, commemorates the (1754–1763), in which the area soon to become Pittsburgh was a major battlefield.

Today the park provides recreational space for workers, visitors, and residents in downtown Pittsburgh and also acts as the site for major cultural events in the city, including the and Three Rivers Regatta. The park, a registered , is operated by the .

The fountain in Point State Park, which sprays water up to 150 feet (46 m) in the air at the head of the , draws upon water from the "Wisconsin Glacial Flow," an that passes beneath the park. [ cite web | url = http://www.clpgh.org/exhibit/neighborhoods/point/point_n77.html | title = The Point: The Underground River | accessdate = 2008-05-24 | publisher = Carnegie Library of Pittsburgh]

Michael DeBerardinis, Secretary of the , announced a $25 million dollar plan to renovate Point State Park on , . The plans call for improving the green spaces within the park, expanding recreational opportunities, preserving historical installations, and updating outdated amenities. The project is scheduled to be completed within four years, with the majority of the work to be completed in time for Pittsburgh's 250th anniversary celebration in 2008.

Sections of the park have fallen into disuse since it was established in 1974. The have used the trenches surrounding the foundations of the remains of as a temporary shelter for years. on the structures of the park has become a major problem. Sections of the park are littered with fence posts, cut logs, plastic drums, and rolled up snow drift fencing. The walkways have become cracked and are beginning to fall apart. The goal of the restoration project is to reestablish the park as a recreational destination.

Plans for improving the park include installing new pumps and pipes in the fountain, establishing a seating area around the fountain and a wading area for children, restoring the river walk with steps that lead into the river, building kiosks for information and concessions, renovating the rest rooms, renovating the landings and surrounding docks, and installing wireless access hubs.

These plans are not being put into place without some controversy. On , , 13 members of two local s were arrested for blocking access by contractors to the work sites at the remnants of Fort Pitt. The unions were protesting the use of four nonrepresented workers by the contractor. In addition, advocates for historical preservation disagreed with the decision to bury the remnants of the fort's walls, which could damage the bricks and remove the walls from public access. [ cite web | url = http://www.pittsburghlive.com/x/pittsburghtrib/news/cityregion/s_490354.html | title = 13 arrested at Point State Park | accessdate = 2007-01-26 | author = Allison M. Heinrichs | publisher = Pittsburgh Tribune-Review]

The confluence of the Allegheny and Monongahela rivers, creating the Ohio River, has greatly impacted the history of Point State Park. It was once at the center of river travel, trade, and even wars throughout the pioneer history of western Pennsylvania. During the mid 1700s, the armies of France and the Great Britain carved paths through the wilderness to control the point area and trade on the rivers. The French built in 1754 on foundations of , which had been built by the colonial forces of .

The French held Fort Duquesne during the , and it became one of the focal points for that war because of its strategic riverside location in disputed territory. The French held the fort successfully early in the war, turning back the expedition led by General . A smaller attack by James Grant in September was repulsed, but with heavy losses. Two months later, on , the , under General John Forbes, captured the site after the French destroyed Fort Duquesne the day before. The British built a much larger fort on the site and named it Fort Pitt.

The Forbes Expedition was successful where the Braddock expedition had failed because of the , in which local American Indians agreed to abandon their alliance with the French. American Indians, primarily Delawares and , made this agreement with the understanding that the British military would leave the area after the war. The Indians wanted a on the spot, but they did not want a British army garrison. The British, however, built Fort Pitt on the site, naming it after .

As a result, in 1763 local Delawares and Shawnees took part in , an effort to drive the British from the region. The Indians' began on , but the fort was too strong to be taken by force. In negotiations during the siege, the commander of Fort Pitt gave two Delaware emissaries blankets that had been exposed to smallpox, in hopes of infecting the surrounding Indians and ending the siege. The attempt was probably unsuccessful, and on , , most of the Indians broke off the siege to intercept an approaching force under Colonel , resulting in the . Bouquet fought off the attack and relieved Fort Pitt on August 20.

After Pontiac's War, Fort Pitt was no longer necessary to the British Crown, and was abandoned to the locals in 1772. At that time, the Pittsburgh area was claimed by both Virginia and Pennsylvania, and a power struggle for the region commenced. Virginians took control of Fort Pitt, and for a brief while in the 1770s it was called Fort Dunmore, in honour of Virginia's Governor Lord Dunmore. The fort was a staging ground in of 1774.

During the , Fort Pitt was the headquarters for the western theatre of the war.

A small brick building called the Blockhouse—actually an outbuilding known as a —remains in Point State Park, the only intact remnant of Fort Pitt. It was erected in 1764, and is believed to be the oldest building, not only in Pittsburgh, but in western Pennsylvania. Used for many years as a house, the blockhouse was purchased and has been preserved for many years by the Daughters of the American Revolution, who open it to the public.

The following state parks are within convert|30|mi|km|0 of Point State Park: