Lien Chan
This is a Chinese name; the family name is Lien.

Lien Chan (traditional Chinese: 連戰; simplified Chinese: 连战; pinyin: Lián Zhàn; Pe̍h-ōe-jī: Liân Chiàn) (born August 27, 1936, in Xi'an, China) is a politician in Taiwan. He was Premier of the Republic of China from 1993 to 1997, Vice President of the Republic of China from 1996 to 2000, and was the Chairman of the Kuomintang (KMT) from 2000 to 2005. Upon his retirement as chairman in August 2005, he was given the title Honorary Chairman of the Kuomintang.

Lien Chan was born in Xi'an, Shaanxi province, China as the only child of Lien Chen-tung (連震東) and Chao Lan-k'un (趙蘭坤). His paternal grandfather, Lien Heng (連橫), was the writer of The General History of Taiwan (台灣通史), a book that is often cited for the quote, "Taiwan's sorrow is that it has no history." Although he was born in Mainland China, because of his family roots in Taiwan, he is not usually considered a member of the Mainlander group in Taiwan.

Lien held assistant professorships of political science at the University of Wisconsin–Madison from 1966 to 1967 and the University of Connecticut from 1967 to 1968. He returned to Taiwan in 1968 to become visiting professor of political science at the National Taiwan University, serving as chairman of the Political Science Department and dean of the Graduate Institute of Political Science the following year.

His official positions included Ambassador to El Salvador (1975–1976), Minister of Communications and Transportation (1981–1987), Vice Premier (1987–1988), Foreign Minister (1988–1990) before becoming Governor of Taiwan Province (1990–1993). In 1993 he was appointed Premier of the Republic of China. In 1996, Lee Teng-hui selected him as running mate in the presidential election. After Lee and Lien won the election for the presidency and the vice-presidency respectively, Lien retained the premiership. This proved unpopular, and opposition parties claimed that this was possibly in conflict with the constitution, leading to a Council of Grand Justices decision ruling that Lien's retention of these dual roles was "constitutional but inappropriate." In response, in 1997, he resigned as Premier but remained Vice President. Before becoming Chairman of the KMT, he was Vice Chairman (1993–2000) and a member of the Central Committee (1984–2000).

Lien took an active role as a representative of Lee Teng-hui in quasi-official diplomacy in the mid-1990s. One of his greatest moments of his career is his 1995 meeting with Václav Havel, in which Lien likened the democratic reforms of the Lee Teng-hui administration as being similar to the Velvet Revolution.

In contrast to his political opponents, Lien Chan, while vice president, was generally considered arrogant, aloof and out of touch with the public. Some have speculated that his immense wealth was obtained through black gold. Among the allegations, his father Lien Chen-tung was the interior minister responsible of Taiwanese agricultural policy. Through his influence, the family purchased farmland in the 50's and 60's and illegally rezoned it. In an investigation by his political opponents, one DPP legislator Tang Bi-A was quoted "It is doubtful that Lien Chan and his father could accumulate billions in wealth for their family when both of them were government officials receiving limited salaries."

He finished third in the 2000 Presidential elections despite having the backing of the KMT. One popular theory on Taiwan, which has some support from Lee's subsequent actions, has that Lien Chan was chosen to head the KMT's ticket by President Lee Teng-hui in a deliberate effort to destroy the KMT. Many have noted in support of this theory that Lien has never been elected on his own to any political office, and his ill-fated campaign for President was the first campaign that he ever undertook. During the 2000 Presidential campaign Lien campaigned on a platform of following in Lee's footsteps and continuing localization reforms. He touted a "3-S" slogan of "Safety, Security and Stability", claiming the selection of a DPP candidate would bring China's wrath and a return of fascism.

Part of Lien's defeat may have been due to the massive 7.4 earthquake on September 21, 1999. As the Vice President and KMT candidate, Lien bore the brunt of public dissatisfaction with government relief efforts, in one instance being chased onto his helicopter by furious victims. In a poll following the earthquake, the undecided vote rose to 47%.

After the defeat of the KMT in 2000, Lien was able to achieve Lee's ouster and assume the leadership of the KMT. He had adopted a platform to erase the Lee effect from Taiwan and "Return to the Good Old Days", a call to return to the heyday of Chiang Ching-kuo. The KMT launched a party wide purge to eradicate Lee supporters and then held a membership drive to attract KMT loyalists. According to Lien, the drive was successful, but many outside observers note a significant drop in membership, as many of the former members who had joined the party as a compulsory act of conscripted military service never renewed. Lien as the Chairman of the KMT also vowed to learn from his loss and remake the KMT party. He held forums to discuss erasing the KMT's image as a corrupt institution and Lien promised to give up property seized by the KMT after the Japanese exodus. The KMT has returned some properties to the government and it considers the matter to be closed, but others disagree. Lien has been criticized for trying to give the land away to local governments as a type of payoff for support.

Lien Chan ran for president with Soong as his running mate in a combined KMT-PFP ticket against Chen Shui-bian in the 2004 Presidential elections, though it had been thought that Lien and Soong personally disliked each other. During the 2000 campaigns, Lien accused Soong of positioning his family graves to interfere with Lien's Feng Shui forcing Lien to reposition his graves.

Initially, it was believed that the Lien-Soong ticket would be a sure win, given that both men garnered a combined 59.9% of the vote in 2000. However, the lead gradually diminished to a dead heat, and both sides were forced to moderate their positions. In December 2003, Lien said that while the KMT was opposed to "immediate independence," it did not wish to be classed as "pro-reunificationist" either. The platform was changed from promoting the eventual reunification of China to preserving the status quo and leaving Taiwan's status to be settled by future generations. Chen also floated the possibility of eventual reunification.

With the platforms largely similar, the campaign was filled largely with personal attacks between Lien and Chen. On March 20, the day after President Chen and Vice President Annette Lu were shot while campaigning, Lien lost the election by 0.2% of the vote. He refused to concede and decided to challenge the results. Pan-Blue supporters staged several mass rallies in the ensuing weeks, with some gatherings turning into riots. Lien sought to nullify the election and institute a recount. The recount confirmed the result, but by a narrower margin. His appeals to cancel the result and hold new elections were rejected by the courts.

In 2005, after Ma was elected as KMT chairman to succeed Lien, the KMT Central Committee offered the unprecedented title of "Chairman Emeritus" (Honorary Chairman) to Lien. Lien did not explicitly say whether he was accepting the title, but his failure to decline appears to be an implicit acceptance. 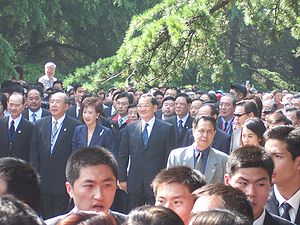 Lien Chan and the Kuomintang touring the Sun Yat-sen Mausoleum in Nanjing, China. The Pan-Blue coalition visited the mainland in 2005.

On April 26, 2005, Lien Chan traveled to mainland China to meet with the leaders of the Communist Party of China. His meeting with CPC leader Hu Jintao was the highest level exchange since Chiang Kai-shek and Mao Zedong met in Chongqing on August 28, 1945, to celebrate the victory in the Second Sino-Japanese War and discuss a possible truce in the impending Chinese Civil War.

On April 27, Lien visited the Sun Yat-sen Mausoleum in Nanjing. On April 28, he arrived in Beijing and visited the Palace Museum.

On the afternoon of April 29, he met with President of the People's Republic of China Hu Jintao (in his capacity as General Secretary of the Communist Party of China) and they reached a 5-point consensus, reaffirming that Taiwan is part of China and that the two parties would work together to prevent formal Taiwan independence.

Before meeting with Hu on April 29, Lien Chan delivered a speech at Peking University, which his 96-year-old mother Zhao Lankun attended nearly 80 years ago. On April 30, he headed to his birthplace Xi'an. He revisited Houzaimen Primary School, which he attended 60 years ago. He also visited the Great Mausoleum of Qin Shi Huang, China's first emperor. Early on May 1, he paid homage to his grandmother's tomb near Qingliangsi.

Later that day, Lien arrived in Shanghai, where he attended a banquet hosted by Shanghai CPC Party Secretary General Chen Liangyu. On May 2, he met with Wang Daohan, the 90-year-old chairman of the mainland-based Association for Relations Across the Taiwan Straits, and the representatives of Taiwanese businesspeople. He returned to Taiwan at noon on May 3.

In December 2010, Lien was awarded the Confucius Peace Prize in China, which was instituted as a reaction to the Nobel Peace Prize awarded to Liu Xiaobo. Lien's office said to the Taipei Times: “We’ve never heard of such an award and of course Mr Lien has no plans to accept it.” [2]

Lien was selected by President Ma Ying-jeou as special envoy to represent the Republic of China (participating as Chinese Taipei) at the APEC in 2008, 2009, and 2010.

While at APEC, Lien also met with PRC President Hu Jintao, the highest level of official exchange between the Mainland and Taiwan on the international stage.[3]

His family name is Lien; his given name is Chan."Chan" means "battles" and his full name literally means "successive battles." The name originated from Lien Heng who, sick with liver cancer in Shanghai, wrote to his pregnant daughter-in-law in Xi'an:

"China and Japan will battle inevitably. If the child born is a boy, name him Lien Chan, signifying that the strength coming from within oneself will never diminish and can overcome the enemies and be victorious. It also has the meaning of reviving the former nation, reorganizing the light and hope of our homeland." (『中、日必將一戰，如生男則名連戰，寓有自強不息，克敵制勝，有復興故國、重整家園光明希望。』)