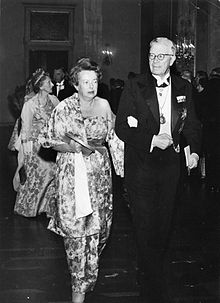 Maria Goeppert-Mayer, walking in to the Nobel ceremony with King Gustaf VI Adolf of Sweden

Maria Goeppert-Mayer (June 28, 1906 – February 20, 1972) was a German-born American theoretical physicist, and Nobel laureate in Physics for proposing the nuclear shell model of the atomic nucleus. She is the second female laureate in physics, after Marie Curie.

Maria Goeppert was born in Kattowitz (now Katowice, Poland), within the German Empire's Prussian Province of Silesia. Her family moved to Göttingen in 1910 when her father Friedrich was appointed Professor of Pediatrics at the University of Göttingen. On her father's side, Goeppert-Mayer was supposedly a seventh-generation professor. From a young age, she was surrounded by the students and lecturers from the university, intellectuals including the future Nobel winners, Enrico Fermi, Werner Heisenberg, Paul Dirac and Wolfgang Pauli. In 1924, Goeppert passed the abitur, making her eligible to enter university, and enrolled at Göttingen university in the fall. Among her professors at Göttingen were three future Nobel prize winners: Max Born, James Franck and Adolf Otto Reinhold Windaus. Goeppert completed her Doctor of Philosophy degree (Ph.D.) at the University of Göttingen in 1930, and in that same year, she married Dr. Joseph Edward Mayer, an assistant of James Franck. The new couple next moved to the United States, Mayer's home country.

For the next few years, Goeppert-Mayer worked at unofficial or volunteer positions at the university at which her husband was professor—first at the Johns Hopkins University in Baltimore, Maryland, from 1931–39, then Columbia University in 1940-46, and after that the University of Chicago. During this time, Goeppert-Mayer was unable to gain a professional appointment at Mayer's universities due in part to both sexism [1] and strict rules against nepotism. However, she was able to find other opportunities, including a teaching position at the Sarah Lawrence College, a research position with Columbia University's Substitute Alloy Materials Project and with the Opacity Project, and she also spent some time at the Los Alamos Laboratory.

During her husband's time at the University of Chicago, Goeppert-Mayer was able to become a voluntary Associate Professor of Physics at the school. In addition, when the nearby Argonne National Laboratory was founded on July 1, 1946, Goeppert-Mayer was offered a part-time job there as a Senior Physicist in the Theoretical Physics Division. It was during her time at Chicago and Argonne that she developed a mathematical model for the structure of nuclear shells, the work for which she was awarded the Nobel Prize in Physics in 1963, shared with J. Hans D. Jensen and Eugene Paul Wigner.

Goeppert-Mayer's model explained "why certain numbers of nucleons in the nucleus of an atom cause an atom to be extremely stable". This had been baffling scientists for some time. These numbers are called "magic numbers". She postulated, against the received wisdom of the time, that the nucleus is like a series of closed shells and pairs of neutrons and protons like to couple together in what is called spin orbit coupling. This is like the Earth spinning on its axis as the Earth itself is spinning around the Sun. Goeppert-Mayer described the idea elegantly:

At the same time, there were German scientists working on exactly the same thing. After they had published their results, Goeppert-Mayer sought to collaborate with them. One from the German team, Jensen, worked with her to produce a book in 1950 called Elementary Theory of Nuclear Shell Structure. In 1963, Goeppert-Mayer and Jensen shared the Nobel Prize for Physics "...for their discoveries concerning nuclear shell structure." She was quoted as saying, "Winning the prize was half as exciting as doing the work."

During the 1940s and early 1950s, Goeppert-Mayer worked out equations in optical opacity, while working for Edward Teller - equations that were used for Teller's and others' work in the design of the first hydrogen bomb (detonated on November 1, 1952).

In 1960, Goeppert-Mayer was appointed to a position as a (full) Professor of Physics at the University of California at San Diego. Although she suffered from a stroke shortly after arriving there, she continued to teach and conduct research for a number of years.[2]

Goeppert-Mayer died in San Diego, California, in 1972 after a heart attack that had struck her the previous year had left her comatose.

After her death, an award in her name was set up by the American Physical Society to honor young female physicists at the beginning of their careers. Open to all female physicists who hold Ph.D.s, the winner receives money and the opportunity to give guest lectures about her research at four major institutions. Two of Goeppert-Mayer's former universities also honor her. The University of Chicago presents an award each year to an outstanding young woman scientist or engineer, and the University of California at San Diego hosts an annual Maria Goeppert-Mayer symposium, bringing together female researchers to discuss current science. Crater Goeppert-Mayer on Venus (diameter of about 35 km) is also named after Goeppert-Mayer. In 2011, a US postage stamp was issued.