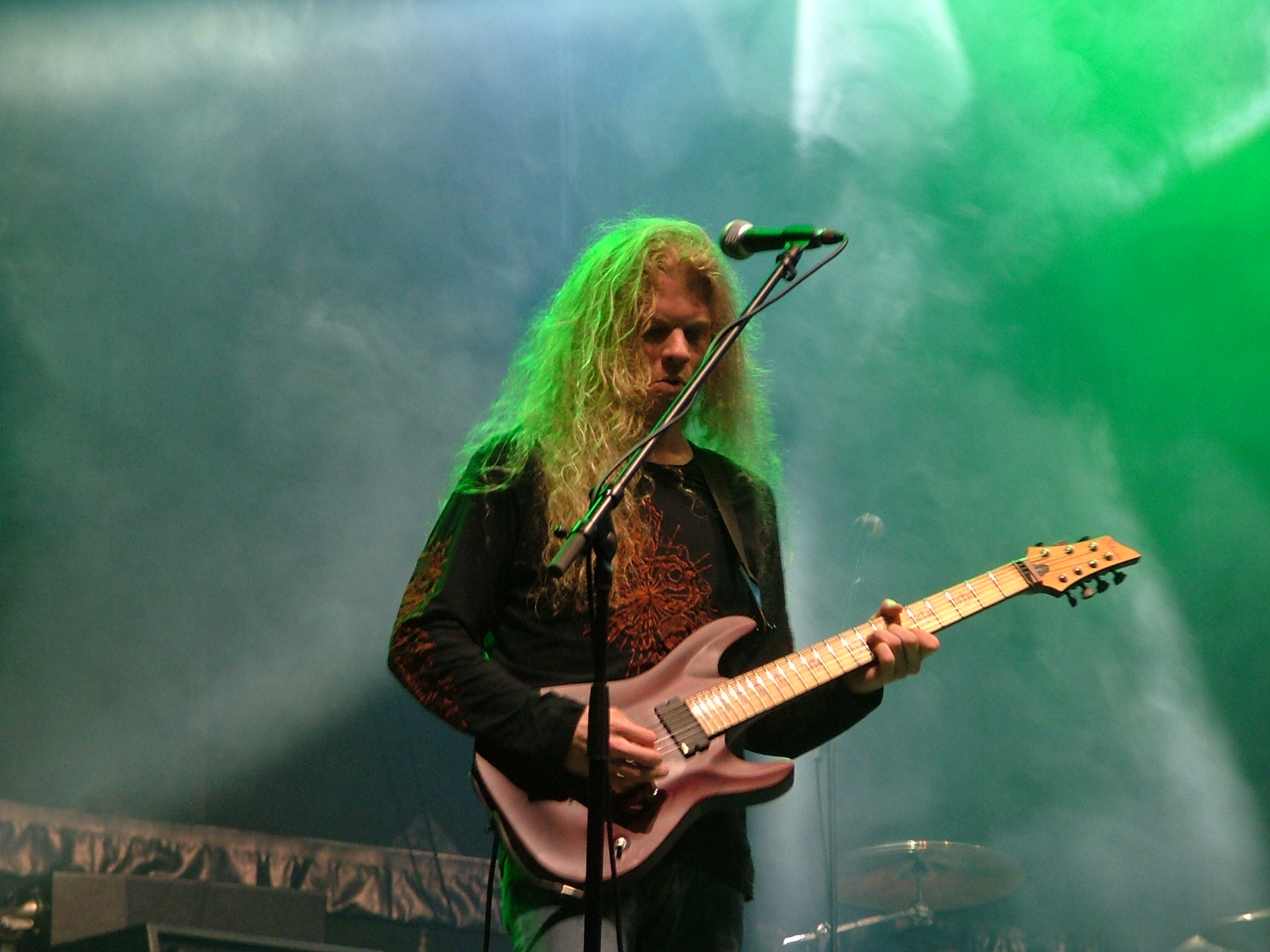 Jeff Loomis (born ) is the ist for the Seattle band, . He has listed guitarists such as , , and Marty Friedman as his influences.

Loomis is a self taught guitarist. He got his first instrument at nine or ten years old, but didn't start practicing seriously until around the age of 15. As a teenager in he played in a handful of cover bands and three bands before joining more established bands.

He was auditioned for (during the "" era) at the age of 16, when their lead guitarist left the band. After they played a few songs together, , the band's frontman and other lead guitarist, thanked Loomis and told him that one day he would become a great guitar player, but because of his age he was not right for the position. Jeff Loomis saw Cacophony on tour, and told Marty Friedman, who became very interested, about the audition. Marty tried out for the position and joined the band in 1989. In , Loomis would then share the stage with Megadeth, as the lead guitarist for Nevermore as part of Mustaine's festival.

Not too long after being auditioned for the lead part in Megadeth, Loomis was able to join the band Sanctuary after guitarist Sean Blosl had left. He was able to take his place at this time; however, because of a dispute caused by guitarist Lenny Rutledge wanting to make oriented music, Sanctuary broke up 4 months afterwards.

After the break-up, Loomis and former Sanctuary members (vocalist) and (bassist) made plans to form , and in late , Loomis became the lead guitarist of Nevermore after the brief period being in Sanctuary. Now, he is the main songwriter of Nevermore, adding to the unique sound that fans are familiar with. His contributions can be found in albums such as "The Politics of Ecstasy", "" and their latest album "" (including , who previously featured in the band Testament). Currently, Loomis plays an important role in portraying the sound that Nevermore has today, using 7 string guitars and techniques such as . One of his more important musical showcases is in the album "", in which he wrote most of the songs before Nevermore.

In 2005, Jeff reported that he would take some time as a break and then begin recording a solo album. He said, "It's something I've been wanting to do for sometime... It will be like a Jason Becker/Marty Friedman kind of thing." On April 1, 2008, Jeff said that all 10 songs which have been written have had the drumming recorded (which was done by Mark Arrington pretty much overnight) and they will soon begin tracking the rhythm guitar. On 3rd July 2008, it was announced that the album will be called [http://www.roadrunnerrecords.com/blabbermouth.net/news.aspx?mode=Article&newsitemID=100222] . It was released 30th September via Century Media Records.

Loomis had a monthly columnFact|date=October 2007 in magazine entitled "Merchant of Menace" where he explained how to play the riffs and solos of Nevermore. In more recent columns, His former co-guitarist in Nevermore, has co-written the column, which is dubbed "The Merchants of Menace."

Loomis plays various Schecter seven string guitars, including the Jeff Loomis C7 FR Signature Model with EMG 707 pickups and a Floyd Rose tremolo. He also plays a Schecter C-7 Hellraiser with EMG 707 active humbucker pickups, and the C-7 Blackjack with the JB and 59' pickups. Prior to Schecter he played a wide variety of guitars including , Gibson, Jackson and ESP. He endorsed Peavey amplifiers and after that he endorsed Krank amplifiers. Early in 2007, Schecter guitars brought out the Jeff Loomis Signature Schecter 7 string, based on the C-7 Hellraiser model. It features the EMG 707 active pickups, original Floyd rose, ash body and three piece maple neck. It is the same as his other one but it has a fixed bridge instead of a Floyd Rose.