Lucy Christiana, Lady Duff Gordon (née Sutherland) (13 June 1863 – 20 April 1935) was a leading fashion designer in the late 19th and early 20th centuries, best known as "Lucile", her professional name. The first British designer to achieve international renown, Lucile was a widely-acknowledged innovator in couture styles as well as in fashion industry public relations. Apart from originating the "mannequin parade", a precursor to the modern fashion show, and training the first professional models, she launched liberating slit skirts and low necklines, popularized less restrictive corsets, and promoted alluring, pared-down lingerie.[1] She opened branches of her London house, Lucile Ltd, in Paris, New York City, and Chicago, dressing a trend-setting clientele of royalty, nobility, and stage and film personalities.[2] Lucy Duff Gordon is also remembered as a survivor of the sinking of the RMS Titanic in 1912, and as the losing party in the precedent-setting 1917 contract law case of Wood v. Lucy, Lady Duff-Gordon, in which Judge Benjamin N. Cardozo wrote the opinion for New York's highest court, the New York Court of Appeals.[3] 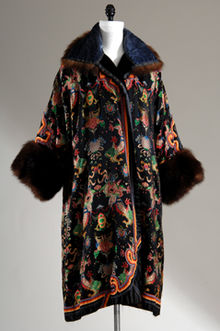 Daughter of civil engineer Douglas Sutherland (1838–1865) and his Anglo-French-Canadian wife Elinor Saunders (1841–1937), Lucy Christiana Sutherland was born in London, England and raised in Guelph, Ontario, Canada, after her father's death of typhoid fever. When her mother remarried in 1871 to bachelor David Kennedy (d. 1889) she moved with them and her sister, the future novelist Elinor Glyn, to Saint Helier on the Isle of Jersey. Lucy acquired her love of fashion through dressing her collection of dolls, by studying gowns worn by women in family paintings, and later making clothes for herself and her sister.[4] Returning to Jersey, after a visit to relatives in England in 1875, Lucy and Elinor survived the wreck of their ship when it ran aground in a gale.[5]

In 1884 Lucy married James Stuart Wallace, with whom she had a child, Esme (1885–1973) (later wife of the 2nd Earl of Halsbury and mother of Anthony, 3rd Earl of Halsbury). An alcoholic, Wallace was regularly unfaithful, and Lucy sought consolation in love affairs, including a long relationship with Dr. Sir Morell Mackenzie.[6] The Wallaces separated in about 1890, and were divorced in 1893.[7] In order to support herself and her daughter, Lucy began working as a dressmaker from home. By 1894 she had opened Maison Lucile in Old Burlington St, in the heart of the fashionable West End of London.[8] In 1897 a larger shop was opened at 17 Hanover Square, before a further move (c. 1901–04) to 14 George St. In 1903 the business was incorporated as "Lucile, Ltd" and the following year moved to 23 Hanover Square. In 1900 Lucile married Scottish landowner and sportsman Sir Cosmo Duff Gordon.[9]

Lucile Ltd served a wealthy clientele including aristocracy, royalty, and theatre stars. The business expanded with branches opening in New York City, Paris, and Chicago in 1910, 1911, and 1915 respectively.[10] 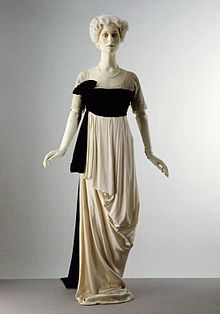 Lucile was most famous for her lingerie, tea gowns, and evening wear. The gown illustrated at right typifies a classically draped style often found in Lucile designs. It was designed in Paris for the spring 1913 collection.[11]

She is also widely credited with training the first professional fashion models (called mannequins) as well as staging the first runway or "catwalk" style shows.[12] These affairs were theatrically inspired, invitation-only, tea-time presentations, complete with a stage, curtains, mood-setting lighting, music from a string band, souvenir gifts, and programmes. Another innovation in the presentation of her collections were what she called her "emotional gowns." These dresses were given descriptive names, influenced by literature, history, popular culture, and Lucile's interest in the psychology and personality of her clients.[13]

The designer was especially noted for luxurious layered and draped garments in soft fabrics of blended pastel colours, often accentuated with sprays of hand-made silk flowers, which became a hallmark of her work.[14] However, Lucile also created simple, smart tailored suits and daywear.[15]

Some well-known clients, whose clothing influenced many when it appeared in early films, on stage, and in the press, included: Irene Castle, Lily Elsie, Gertie Millar, Gaby Deslys, Billie Burke, and Mary Pickford. Lucile costumed many theatrical productions including the London première of Franz Lehár's operetta The Merry Widow (1907), the Ziegfeld Follies revues on Broadway (1915–21), and the D. W. Griffith silent movie Way Down East (1920).[16] Her fashions were also frequently featured in Pathé and Gaumont newsreels of the 1910s and 20s, and she appeared in her own weekly spot in the British newsreel "Around the Town" (c. 1917–1919).[17]

In addition to her career as a couturière, costumier, journalist, and pundit, Lucile took significant advantage of opportunities for commercial endorsement, lending her name to advertising for shoes, brassieres, perfume, and other luxury apparel and beauty items.[18] Among the most adventurous of her licensing ventures were a two-season lower-priced, mail-order fashion line for Sears, Roebuck & Co. (1916–17), which promoted her clothing in special de luxe catalogues, and a contract to design interiors for limousines and town cars for the Chalmers Motor Co, later Chrysler Corporation (1917).[19]

In 1912, Lucile travelled to America on business in connection with the New York branch of her salon. She and her husband, Sir Cosmo Duff Gordon, booked first class passage on the ocean liner RMS Titanic under the names Mr. and Mrs. Morgan, a possible explanation being that they hoped to avoid publicity on landing in New York. Lucile's secretary, Laura Mabel Francatelli, nicknamed "Franks," accompanied the couple.[20] On 14 April, at 11:40 pm the Titanic struck an iceberg and began to sink. During the evacuation the Duff Gordons and Franks escaped in Lifeboat 1. Although the boat was built to hold forty people, it was lowered with just twelve – most of them crewmen.

Some time after the ship sank, while afloat in boat 1, Lucile reportedly commented to her secretary, "There is your beautiful nightdress gone."[21] A fireman, annoyed by her comment, replied that while the couple could replace their property, he and the other crew members had lost everything in the sinking. Cosmo then offered each of the men £5 to assist them until they received new assignments. While on the RMS Carpathia, the Cunard liner that rescued Titanic's survivors, Cosmo presented the men from Lifeboat 1 with checks drawn on his bank in London, Coutts. Later this action spawned gossip that the Duff Gordons bribed the crew in their boat not to return to save swimmers out of fear it would be swamped.[22]

These rumours were fuelled by the tabloid press in the United States and, eventually, in the United Kingdom. On 17 May, Cosmo Duff Gordon testified in London at the hearings of the British Board of Trade Inquiry into the disaster and on 20 May Lucile took the stand. Their testimony attracted the largest crowds during the inquiry.[23]

Cosmo Duff Gordon faced tough criticism during cross-examination while his wife "had it slightly easier". Dressed in black, with a large, veiled hat, she told the court she remembered little about what happened in the lifeboat on the night of the sinking, and could not recall specific conversations. Attorneys did not seem to have pressed her very hard.[24] Lucile noted that for the rest of her husband's life he was broken-hearted over the negative coverage by the "yellow press" during his cross-examination at the inquiry. The final report by the inquiry determined that the Duff Gordons did not deter the crew from any attempt at rescue.[25]

The Titanic episode is one of the most tangible aspects of Lucile's life, thanks partly to motion pictures. The films, however, portrayed her without great attention to accuracy: in cameo by Harriette Johns in A Night to Remember (1958), produced by William MacQuitty, and again by Rosalind Ayres in James Cameron's 1997 blockbuster Titanic. In the latter film the role of Lucile's husband Cosmo was portrayed by the actress' own husband, Martin Jarvis.

A faded silk kimono with black cord edging, for some time thought to have been worn by Lucile as she escaped the Titanic, is now believed to have belonged to her daughter Esme, Countess of Halsbury. The distinctive print on that garment, designed by Mariano Fortuny, dates the item to post World War One, following the closure of Fortuny's factory, and the confiscation of its equipment. It reopened in 1919 with new, more commercial designs.[26] A letter written by Lucile does reveal that although she wore a lavender kimono-style bathrobe with similar black piping, it was a partially-made garment from the Paris branch of her salon. She also described wearing a pair of pink Yantorny slippers, a blue head wrap and a squirrel coat.[27] An apron said to have been worn by Lucile's secretary, Laura Francatelli, can be seen at the Maritime Museum in Liverpool, and her life-jacket was sold, along with correspondence about her experiences in the disaster, at Christie's, London, in 2007.

Lucile had another close call three years after surviving the Titanic when she booked passage aboard the RMS Lusitania on its last voyage. It was reported in the press that she cancelled her trip due to illness.[28] The Lusitania was destroyed by a German torpedo on 7 May 1915.[29]

In 1917, Lucile lost the New York Court of Appeals case of Wood v. Lucy, Lady Duff-Gordon, in which Judge Cardozo established precedent in the realm of contract law when he held Lucile to a contract that assigned the sole right to market her name to her advertising agent, Otis F. Wood, despite the fact that the contract lacked explicit consideration for her promise. Cardozo noted that, "A promise may be lacking, and yet the whole writing may be 'instinct with an obligation'" and, if so, "there is a contract." 222 N.Y. 88, 118 N.E. 214 (1917).

Cardozo famously opened the opinion with the following description of Lucile:

The defendant styles herself "a creator of fashions." Her favor helps a sale. Manufacturers of dresses, millinery, and like articles are glad to pay for a certificate of her approval. The things which she designs, fabrics, parasols, and what not, have a new value in the public mind when issued in her name.

Although the term "creator of fashions" was part of the tagline in her columns for the Hearst papers, some observers have claimed that Cardozo's tone revealed a certain disdain for Lucile's position in the world of fashion. Others accept that he was merely echoing language used by the defendant in her own submissions to the court as well as in her publicity.[30]

Lucile's connection with her design empire began to disintegrate following a restructuring of Lucile, Ltd in 1918–19, and by September 1922 she had ceased designing for the company, which gradually diminished in success after her departure.[31] Meanwhile, its founder (who continued to be known as Lucile) worked from private premises designing personally for individual clients.[32] She was briefly associated with the firm of Reville, Ltd.,[33] maintained a ready-to-wear shop of her own[34] and lent her name to a wholesale operation in America.[35]

Lucile also continued as a fashion columnist and critic after her design career ended, and she penned her best-selling autobiography Discretions and Indiscretions in 1932. She died of breast cancer, complicated by pneumonia, in a Putney, London nursing home in 1935 at the age of 71.[36] The date of her death, 20 April, was the fourth anniversary of her husband's death.

Lucile's former assistant, Howard Greer, published memories of his years working with her in the book Designing Male (1950). A dual biography of Lucile and her sister Elinor Glyn, called The 'It' Girls, by Meredith Etherington-Smith, was published in 1986, the title stemming from Elinor's popularization of the euphemism "it" to denote sexuality or "sex appeal."

A number of international museum exhibitions have featured Lucile costumes in recent years, such as the Metropolitan Museum of Art's "Cubism and Fashion" (1999), the Museum of the City of New York's "Fashion on Stage" (1999) and the Victoria and Albert Museum's "Black in Fashion" (2000) As of 2006, the V&A included a Lucile suit on permanent exhibit. The first exhibition devoted exclusively to Lucile's work was the Fashion Institute of Technology's "Designing the It Girl: Lucile and Her Style" (2005)