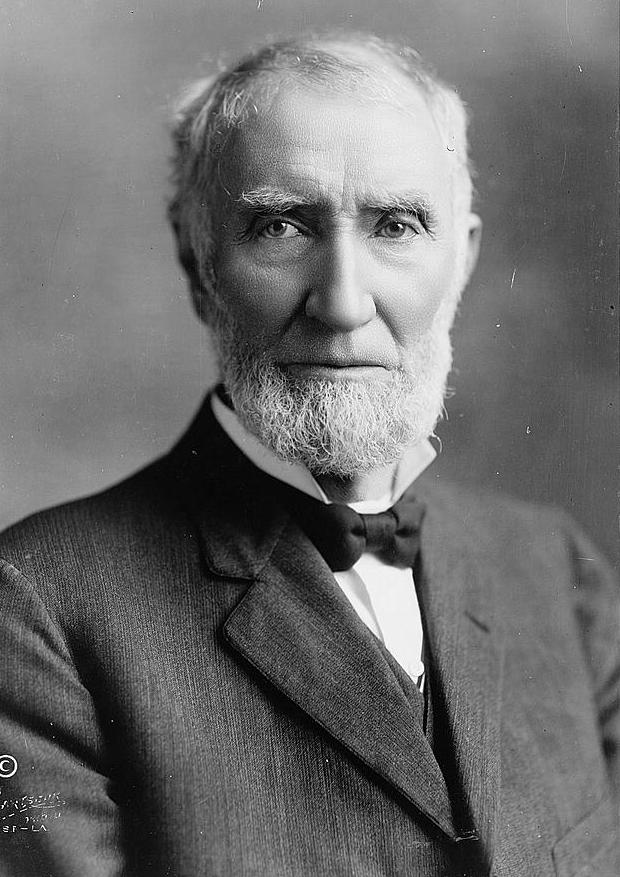 :"For other people named Joseph Cannon see "Joseph Gurney Cannon (, &ndash; , ) was a politician from and leader of the Republican Party. Cannon served as from 1903 to 1911, and historians generally consider him to be the most dominant Speaker in United States history, with such control over the House that he could often control debate. Cannon is the second longest-serving Republican Speaker in history, having been surpassed by fellow Illinoisan , who passed him on , . He was also the first Congressman to surpass 40 years of service (non-consecutive), ending his career with 48 years of cumulative congressional service, a record that held until the 1960s.

He was born in Guilford, and in 1840 moved with his parents to Annapolis, Indiana, about 30 miles north of . He was the elder of two sons of Horace Cannon, a country doctor. Horace Cannon drowned when Joseph was ten years old as he tried to reach a sick patient by crossing Sugar Creek. Young Cannon took charge of the family farm. Gulielma (Hollingsworth) was his mother; his brother William would become a successful banker and realtor.

Asked by Terre Haute politician and lawyer , future Secretary of the Interior under President , to testify in a slander case, Cannon became fascinated with the law. Eventually, he asked Usher if he could study law under him and moved to Terre Haute. At age 19 he traveled to to attend a semester of law school at the law school.

He was admitted to the bar in 1858 and commenced practice in , in 1858, but was disappointed when Usher refused to offer him a place in his office. That year he relocated to . His choice of a new hometown was somewhat involuntary, taking place whilst he was travelling from , to Chicago to find more clients for his law firm. During the trip, he ran out of money. He boarded a Chicago-bound train in ; after the train had started, he was asked for his ticket. Because Cannon did not have a ticket, he was removed from the train in Tuscola. [" [http://www.lib.niu.edu/ipo/1994/ihy940467.html Joseph G. Cannon's Tuscola, Illinois, Connection] ", "Illinois History", April 1994.] There, he became for the twenty-seventh judicial district of Illinois, holding the position from March 1861 to December 1868. In 1876 moved to , where he resided the rest of his life. He and his wife Mary P. Reed, whom he married in 1862, had two daughters.

He became a follower of during the of 1858. After Lincoln was elected President in 1860, Cannon received an appointment as a regional prosecutor.

Cannon, a member of the Republican Party, was elected as to the from to the Forty-second and to the eight succeeding Congresses (, –, ), and was the chairman, Committee on Expenditures in the Post Office Department (Forty-seventh Congress), Committee on Appropriations (Fifty-first Congress).

He was an unsuccessful candidate for reelection in 1890 to the Fifty-second Congress, but was elected to the Fifty-third and to the nine succeeding Congresses that sat between 1893 and 1913.

He attempted to gain the Speakership four times before succeeding. His antic speaking style, diminutive stature and pugnacious manner were his trademarks. The newspapers frequently lampooned him as a colorful rube.

"Uncle Joe", as he was known, often clashed with fellow Republican , who Cannon remarked had "no more use for the Constitution than a tomcat has for a marriage license".Joseph was chairman to the Committee on Appropriations (Fifty-fourth through Fifty-seventh Congresses), Committee on Rules (Fifty-eighth through Sixty-first Congresses), and Speaker of the House of Representatives (Fifty-eighth through Sixty-first Congresses). He received fifty-eight votes for the presidential nomination at the Republican National Convention at in 1908.

In 1910 an Insurgent revolt flared in the House as both Democrats and dissatisfied Republicans stripped the Speaker of some of his powers, such as heading the House Rules Committee and ability to appoint members of other House committees.

Cannon was defeated in 1912 but returned in 1914 and was re-elected through 1922. He was a critic of President and US entry into . He was also an outspoken critic of Wilson's .

Cannon retired in 1922; he was featured on the cover of the first issue of "Time" magazine on the last day of his term in office.

Born a Quaker, he became a Methodist after leaving Congress. However, he may have been effectively a Methodist long before this. After marrying Mary Reed in a Methodist service 1862, a Quaker encouraged him to express regret for this, to which Cannon replied, "If you mean that I am to get up in meeting and say that I am sorry I married Mary, I won't do it. I'm damned if I'm sorry and I'm damned if I will say I am." [cite book |last=Bolles |first=Blair |title=Tyrant from Illinois |origyear=1951 |oclc=656722 |pages=42]

*The first building of offices for congressmen outside of the building was named after Cannon.

*Cannon was the first person to be featured on the cover of "Time" magazine, appearing in its first issue (1923).