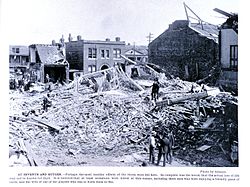 The Sherman, Texas tornado outbreak was the first of a series of deadly tornado outbreaks that occurred during the month of May in 1896. The Sherman outbreak took place on May 15, 1896. This outbreak killed 73 people and injured nearly 300 others.

Most of the fatalities on this day came from a single supercell thunderstorm that traveled from Denton to Sherman. The first tornado destroyed several homes south of the Denton area killing two. A second storm north of the town killed an additional three people before producing the deadly Sherman tornado. At around 5:00 pm, a tornado about two blocks wide cut a path through most of the western portion of Sherman and traveled for about 28 miles (45 km). As it arrived near the city, the width did narrowed to about 100 – 400 yards, but the storm intensified. In addition to the complete destruction of nearly 50 homes, an iron bridge was blown away by the cyclone. Bodies of the victims were transported into the court house and a vacant building. Several bodies were recovered from a muddy creek.[1] Seventy-three people were killed by this single tornado, one of the worst on records in North Texas and the Red River Valley region.

The second major tornado outbreak took place on May 17 where two zones of activity produced deadly tornadoes across the Midwest and Plains states. The first tornado however came from a different system, and killed at least 5 near Elva, Kentucky when their home was destroyed.

During the late afternoon a 1 mile (2 km) wide (possibly F5) tornado traveled through portions of northern Kansas and southern Nebraska and swept away numerous farms along its path and killed at least 25 people. The hardest hit areas along the 100 miles (160 km)+ track included the Seneca (six fatalities), Oneida (six fatalities), Reserve (five fatalities) and Sabetha (three fatalities). Four fatalities were also recorded in Nebraska by this same tornado. At least 200 others were injured. Damage in Seneca alone was estimated at around $250,000 in 1896 dollars where most of the homes, the fairgrounds and other small structures sustained at least heavy if not complete damage. The Grand Opera House in that town as well as the Nemaha County Courthouse were also flattened.[2][3][4]

After a small lull in the intense activity, the third outbreak started across the Upper Plains states on May 24. One night-time tornado near Des Moines, Iowa killed at least 21 people including several members of a single family. Fatalities were recorded in Bondurant, Valeria and Mingo in Polk and Jasper Counties. 60 people were also injured.[5]

Late during the evening hours of May 25, another F5 tornado touched down and moved northeast for about 30 miles (48 km). The system affected portions of Oakland, Lapeer and Livingston Counties northwest of Detroit. Areas affected included Thomas, Ortonville and Oakwood just after 9:00 pm. With 47 deaths, this is the second deadliest tornado ever in Michigan trailing only the Flint Tornado of 1953 which killed 116 in Genessee County just outside Flint. Nine of the fatalities were in a single home in Ortonville and parts of some homes were found dozens of miles away. Twenty-two people were killed in Ortonville, ten in Oakwood, three in Thomas, four in North Oxford and three in Whigville with others in rural areas.[5][6]

Other killer tornadoes on that day touched down in Ogle County, Illinois (two different tornadoes) and Macomb & Tuscola Counties in Michigan. Several homes and farms in the Mount Clemens area were wiped out and others were moved from their foundation and the recently completed Colonial Hotel was leveled. 30 homes were levelled in total and two people were killed.[2][7]

The third deadliest tornado struck the St. Louis Metropolitan Area on both sides of the Mississippi River in Missouri and Illinois on May 27. That tornado alone killed 255 while 27 other were killed elsewhere in Illinois and seven elsewhere in Missouri including three at a school in Audrain County. Twenty-four of the 27 other fatalities were recorded by a single tornado with 13 of them near New Baden. In that town about half of the homes were completely destroyed with damage figures at around $50,000. The towns of Belleville and Mascoutah were also hit. Three people were killed by the other killer tornado that tracked between Nashville and Mount Vernon.[5][8][9] Fatalities were also reported the following day in Pennsylvania and New Jersey near Trenton between Philadelphia and New York City.[2]