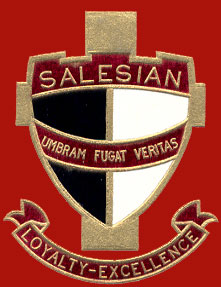 Salesian High School is a coeducational preparatory high school in the .

The school's patron saint is , the Italian founder of the Salesian order. [ [http://www.salesian.com/about.asp About] ]

The school's is "Loyalty - Excellence".

The school began as the "Salesian House of Studies" in 1927, serving as a novitiate and formation community for young adult members of the Salesian Society. [Section source: [http://www.salesian.com/about_history.asp School history] .] The campus was developed over the years, with a classroom building and a library among the added structures. The school began accepting male students from the general population in 1960 and opened to female students in 1989.

The student body at Salesian High School comes from throughout Contra Costa County. Salesian students reflect the cultural diversity of the community. 99-100% of those who graduate Salesian continue their studies at a college or university, 77% of the aforementioned at four-year schools and 23% at two-year schools. [ [http://www.salesian.com/collegeprofile.htm Salesian.com] , "College Profile"," retrieved May 29, 2007]

The use of the Native-American "Chieftain" mascot (a stereotypical Indian with a feather headdress) and name had come under repeated ethical scrutiny since 1995 and had been found to be "racist" and "offensive" by some administrators and members of the public.

The following clubs are active at the campus as of 2008.

Salesian High School consists of many acres of green lands which hold five buildings. The school was initially housed on the Emeric estate, with the existing mansion serving to hold both the school and its offices.