In chemistry a chiral ligand is a specially adapted ligand used for asymmetric synthesis. This ligand is an enantiopure organic compound which combines with a metal center by chelation to form an asymmetric catalyst. This catalyst engages in a chemical reaction and transfers its chirality to the reaction product which as a result also becomes chiral. In an ideal reaction one equivalent of catalyst can turn over many more equivalents of reactant which enables the synthesis of a large amount of a chiral compound from achiral precursors with the aid of a very small (often expensive) chiral ligand.

The first such ligand, the diphosphine DiPAMP was developed in 1968 by William S. Knowles of Monsanto Company, who won the 2001 Nobel Prize in Chemistry,[1] and ultimately used in the industrial production of L-DOPA.

Many thousands of chiral ligands have been prepared and tested since then but only several compound classes have been found to have a general scope. These ligands are therefore called privileged ligands.[2][3] Important members depicted below are BINOL, BINAP, TADDOL, DIOP, BOX and DuPhos (a phosphine ligand), all available as enantiomeric pairs. 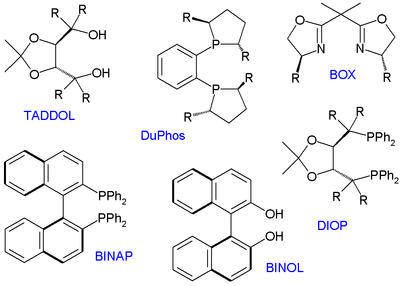 Other members are Salen , cinchona alkaloids and phosphoramidites. Many of these ligands possess C2 symmetry which limits the number of possible reaction pathways and thereby increasing enantioselectivity. 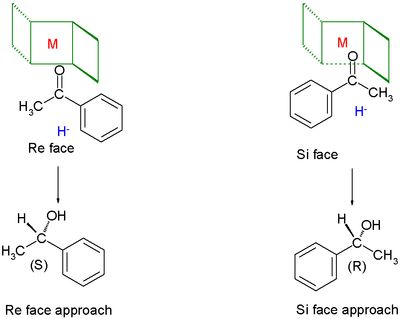 Chiral ligands work asymmetric induction somewhere along the reaction coordinate. The image depicted on the right gives a general idea how a chiral ligand may induce an enantioselective reaction. The ligand (in green) has C2 symmetry with its nitrogen, oxygen or phosphorus atoms hugging a central metal atom (in red). In this particular ligand the right side is sticking out and its left side points away. The substrate in this reduction is acetophenone and the reagent (in blue) a hydride ion. In absence of the metal and the ligand the re face approach of the hydride ion gives the (S)-enantiomer and the si face approach the (R)-enantiomer in equal amounts (a racemic mixture like expected). The ligand/metal presence changes all that. The carbonyl group will coordinate with the metal and due to the steric bulk of the phenyl group it will only be able to do so with its si face exposed to the hydride ion with in the ideal situation exclusive formation of the (R) enantiomer. The re face will simple hit the chiral fence.[4] Note that when the ligand is replaced by its mirror image the other enantiomer will form and that a racemic mixture of ligand will once again yield a racemic product. Also note that if the steric bulk of both carbonyl substituents is very similar the strategy will fail.

In a novel concept, so-called chiral ions team up with traditional cationic catalysts in asymmetric synthesis as demonstrated in this allene hydroxyalkoxylation in which the active catalyst is a salt of gold(I) and a phosphate of a chiral binaphthol:[5][6] 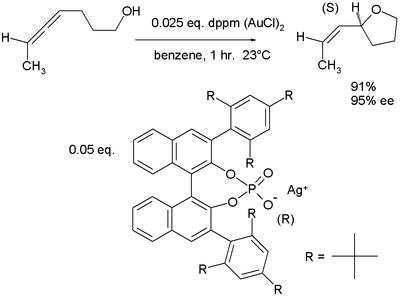