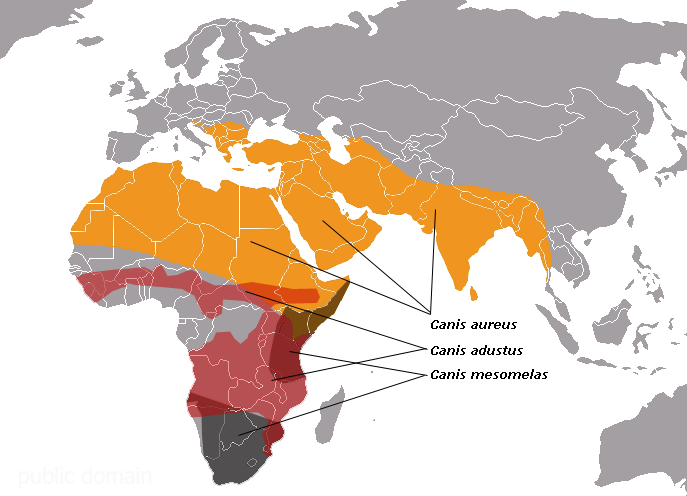 A jackal (from Turkish "çakal", via Persian "shaghal" ultimately from "sṛgālaḥ" [ [http://www.bartleby.com/61/23/J0002300.html American Heritage Dictionary - Jackal entry] ] [ [http://www.etymonline.com/index.php?term=jackal Online Etymology Dictionary - Jackal entry] ] ) is a member of any of three (sometimes four) small to medium-sized species of the family , found in , and southeastern . [Ivory, A. 1999. "Canis aureus" (On-line), Animal Diversity Web. Accessed January 18, 2007 at http://animaldiversity.ummz.umich.edu/site/accounts/information/Canis_aureus.html.] Jackals fill a similar ecological niche to the in North America, that of of small to medium-sized animals, s, and omnivores. Their long legs and curved are adapted for hunting small s, s and s. Big feet and fused leg bones give them a long-distance runner's physique, capable of maintaining speeds of 16km/h (10mph) (just over 6 min/mile) for extended periods of time. They are nocturnal, most active at dawn and dusk.

In jackal society the is that of a monogamous pair which defends its territory from other pairs. These territories are defended by vigorously chasing intruding rivals and marking landmarks around the territory with and . The territory may be large enough to hold some young adults who stay with their parents until they establish their own territory. Jackals may occasionally assemble in small packs, for example to scavenge a carcass, but normally hunt alone or as a pair.

All species of jackal are capable predators (all three hunt rodents and small mammals regularly, with the golden and black-backed species known to hunt poisonous snakes, large ground birds such as bustards, and mammals as large as young antelope). However, their popular image as scavengers has resulted in a negative public image.

* The expression "jackalling" is sometimes used to describe the work done by a subordinate in order to save the time of a superior. (For example, a junior lawyer may peruse large quantities of material on behalf of a barrister.) This came from the tradition that the jackal will sometimes lead a lion to its prey. In other languages, the same word is sometimes used to describe the behavior of persons who try to scavenge scraps from the misfortunes of others; for example, by looting a village from which its inhabitants have fled because of a disaster.
* In , "jackal language" refers to communication that labels, judges, and criticizes.