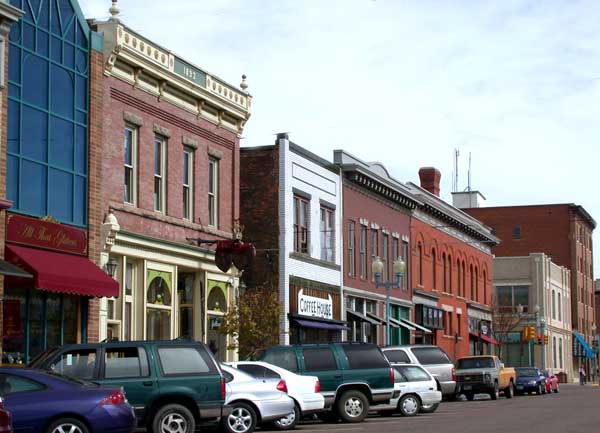 Laramie is a city in and the of Albany County in the of . The population was 27,206 at the 2000 census.GR|2 Located on the in southeastern Wyoming, the city is west of Cheyenne, at the junction of and .

Laramie was settled in the mid-19th century along the Union Pacific Railroad line, which crosses the Laramie River at Laramie. It is home to the , Wyoming Technical Institute, and a branch of Laramie County Community College. serves Laramie. The ruins of Fort Sanders, an Army fort predating Laramie, lie just south of the city along Route 287. Located in the Laramie Valley between the Snowy Range and the Laramie Range, the city draws outdoor enthusiasts because of its abundance of outdoor activities.

Laramie takes its name from Jacques LaRamie, a French or French-Canadian trapper who disappeared in the Laramie Mountains in the late 1810s and was never heard from again. He was one of the first Europeans to visit the area, and his name was given to a river, mountain range, peak, US Army fort, county, and city. More Wyoming landmarks are named for him than any other trapper but Jim Bridger. [Parkin, Patsy, [http://www-wsl.state.wy.us/platte/WTWeb/JacquesLaRamie.htm "Jacques LaRamie History"] , 2000. Retrieved on April 14, 2008.]

Laramie was founded in the mid-1860s as a tent city near the stage route and the Union Pacific portion of the first transcontinental railroad. By May 10, 1868, when the first train entered town, entrepreneurs were building more permanent structures, and Laramie soon had stores, houses, a school, and churches.

Laramie suffered initially from lawlessness. Its first mayor, M.C. Brown, resigned after three turbulent weeks in mid-1868, saying that the town was "ungovernable." This was much due to threats he received from three half-brothers, early gunman "Big" Steve Long, Con Moyer and Ace Moyer. Long was Laramie's first , and with his brothers owned the "Bucket of Blood". The three began harassing settlers, forcing them to sign over the deeds to their property to them. Any who refused were killed, usually goaded into a gunfight by Long. By October 1868, Long had killed 13 men.

However, the first Albany County , rancher , organized a "Vigilence Committee", and on October 28, 1868, Boswell led the committee into the "Bucket of Blood", overwhelmed the three brothers, and lynched them at an unfinished cabin down the street. Through a series of other lynchings and other forms of intimidation, the vigilantes reduced the "unruly element" and established a semblance of law and order. [ [http://uwacadweb.uwyo.edu/RobertsHistory/Readings_chapter_3.htm "Chapter 3: Coming of Rails"] Roberts, Phil (editor), University of Wyoming History Department, "Readings in Wyoming History". Retrieved on August 11, 2007.]

In 1869, Wyoming was organized as Wyoming Territory, the first legislature of which passed a bill granting equal political rights to the women of the territory. In March 1870, five Laramie residents became the first women in the world to serve on a jury. [ [http://uwacadweb.uwyo.edu/RobertsHistory/Readings_chapter_4.htm "Chapter 4: Establishing the Territory and Granting Women Equal Rights] Roberts, Phil (editor), University of Wyoming History Department, "Readings in Wyoming History". Retrieved on August 11, 2007.] Also, since Laramie was the first town in Wyoming to hold a municipal election, on September 6, 1870, a Laramie resident was the first woman to cast a legal vote in the United States.

Early businesses included rolling mills, a tie treatment plant, a brick yard, a slaughterhouse, a brewery, a glass-blowing plant, and a plaster mill, as well as the railroad yards. In 1886, a plant to produce electricity was built.

A bill signed by Governor Francis E. Warren established the (UW) in 1886. Laramie was chosen as the site, and UW opened there in 1887. Under the terms of the Morrill Act, also known as the Land Grant College Act, UW added an agricultural college and experiment station in 1891.

The city gained worldwide notoriety in 1998 after the murder of , a student at the University of Wyoming. His murder caused an international outcry and was the subject of the award-winning play and movie "".

In 2004, Laramie became the first city in Wyoming to prohibit smoking in enclosed workplaces, including bars, restaurants and private clubs. Opponents of the clean indoor air ordinance, funded in part by the , immediately petitioned to have the ordinance repealed. However, the voters upheld the ordinance in a citywide referendum which was conducted concurrently with the 2004 general election. The opponents then challenged the validity of the election in court, claiming various irregularities. However, the judge ruled that the opponents had failed to meet their burden of showing significant problems with the election, and the ordinance, which had become effective in April 2005, remained in effect. [ [http://www.uwyo.edu/news/showrelease.asp?id=10864 Laramie Smoking Ban Subject of Television Program Tuesday"] University of Wyoming news release, October 16, 2006. Retrieved on August 10, 2007.] In August 2005, Laramie's City Council defeated an attempt to amend the ordinance to allow smoking in bars and private clubs.

The city is about convert|41|mi|km|0 west of , and convert|113|mi|km|0 miles north of . Laramie lies along , Interstate 80, and U.S. Route 287, and it remains an important junction on the Union Pacific Railroad line.

Laramie's total precipitation averages only about convert|10|in|mm|-1| a year, and the average number of rainy days per year is about 26. The city experiences a day that is convert|90|°F|°C|0 or warmer about once a year. The average temperature in January is convert|21|°F|°C|0, and in July it is convert|64|°F|°C|0. Annual snowfall averages convert|42|in|cm|0. Because of the high elevation, winters are long, and summers are short and relatively cool.

There were 11,336 households out of which 23.0% had children under the age of 18 living with them, 38.3% were married couples living together, 8.0% had a female householder with no husband present, and 50.5% were non-families. 33.2% of all households were made up of individuals and 6.4% had someone living alone who was 65 years of age or older. The average household size was 2.19 and the average family size was 2.83.

The central library of the Albany County Library system, with a wide range of materials for adults and children, is near downtown Laramie; the system's branch libraries are in Centennial, convert|28|mi|km|0 west of Laramie and Rock River, convert|32|mi|km|0 northwest of Laramie. [cite web | title = Albany County Public Library | publisher = Albany County Public Library | url = http://acpl.lib.wy.us/ | accessdate = 2007-10-24] Coe Library, the main library of the University of Wyoming, has materials for general research in business, education, fine arts, science, humanities, and the social sciences as well as audio visual and government documents collections. The Brinkerhoff geology library specializes in geology, geophysics, physical geography, mining and petroleum geology, and geological engineering. Also at the university are the George W. Hooper law library, the Library Annex, a high-density storage facility located in the basement of the UW Science Complex, the Rocky Mountain Herbarium Library, a learning resources center with materials for teachers and children, and an archives, rare book, and manuscript repository known as the American Heritage Center. [cite web | title = Libraries at UW | publisher = The University of Wyoming | url = http://www-lib.uwyo.edu/about/branches/index.cfm | accessdate = 2008-03-12]

Twenty sites in Laramie, including the , are included on the (NRHP). The prison site includes buildings and other exhibits from a frontier community of the late 19th century. The other sites are the , the , Old Main on the University of Wyoming campus, the , , , , , , , , , , Lincoln School, , , , , and the .

Two other Albany County sites near Laramie are on the NRHP. About convert|20|mi|km|0 east of the city is the , a large granite pyramid dedicated to brothers , a Republican member of the from , and , who were influential in building the Union Pacific portion of the . Oakes Ames was also implicated in the scandal and censured by the U.S. House. The other site is , a long ridge extending east-west between Rock River, convert|32|mi|0 northwest of Laramie, and Medicine Bow. Geologic formations in the ridge contain fossils, including dinosaurs, from the .

Sports enthusiasts find much to do in and near Laramie, nestled at convert|7165|ft|m|0 above sea level between the Laramie Range () and the Snowy Range (). Popular activities include skiing, snowmobiling, mountain biking, , fishing, and hiking.

Laramie is a center for mountain biking. Mountain bike trails meander through forests in the Laramie Range and the Snowy Range. The Medicine Bow Mountain Bike Patrol, part of the Laramie Bicycling Network, is a non-profit volunteer organization that works with the Forest Service to patrol and maintain biking trails east of Laramie. One of these, the Medicine Bow Rail–Trail, is a mountain bike trail, convert|21|mi|km|0 long, built between 2005 and 2007 on the bed of an abandoned railroad. The Laramie Enduro 111K, an endurance mountain bike race of convert|111|km|mi|0 is held annually on Laramie Range trails. [cite web | title = Medicine Bow Mountain Bike Patrol | publisher = Cycle Wyoming | url = http://www.cyclewyoming.org/index.htm | accessdate=2007-10-28 ]

Other annual events include the Poker Run recreational ski race held in the Snowy Mountains each February, and the Tour De Laramie, a bicycle rally with stops at local pubs held in April.

Trout fishing is another popular sport in and near Laramie. The Laramie River, which flows north into Wyoming from Colorado, is fished as are the smaller streams in both mountain ranges and the many small plains lakes in the Laramie Basin. [cite web |first = K | last = Kristopherson | title = Laramie River from Colorado into Wyoming | publisher = Wyoming Fishing Net | url = http://www.wyomingfishing.net/ft_lar.htm | accessdate=2007-10-28 ]

Other outdoor activities popular near Laramie include camping, picnicking, rafting on the Laramie River and the , viewing of wildlife such as mule deer, elk, moose, and pronghorn antelope, and general sightseeing. For convert|27|mi|km|0 of its length as it crosses the Snowy Range, the Highway 130 corridor has been designated a National Forest Scenic Byway. [cite web | title = Recreation | publisher = U.S. Department of Agriculture, Forest Service | url = http://www.fs.fed.us/r2/mbr/recreation/| accessdate=2007-10-28 ]

Two members of the council hold at-large seats, and seven are elected from city wards, one per ward. The council picks a mayor and vice-mayor once every two years at the first council meeting in January. On January 2, 2007, the members named Klaus Hanson mayor and Seth Carson vice-mayor.

Laramie is the county seat of Albany County and houses county offices, courts, and the county library.

The main campus of the is in Laramie. In 2005, about 10,000 students were enrolled there at the undergraduate, graduate, and professional levels. [cite web | title = Fact Book | publisher = University of Wyoming | url = http://uwadmnweb.uwyo.edu/uw/facts/studentprofile.asp#Class | accessdate = 2007-10-27 ] The Albany County campus of is also in Laramie. WyoTech also has a campus in Laramie, offering career training in the automotive, diesel, and collision-repair industries. [cite web | title = About WyoTech | publisher = Corinthian Colleges, Inc.| url = http://www.wyotech.edu | accessdate = 2008-05-25 ]

provides daily commercial flights between and . The airport, convert|3|mi|km|0 west of the central business district, is operated and financed by the City of Laramie and Albany County. In addition to commercial flights, the airport serves private and corporate planes and atmospheric research aircraft from the University of Wyoming.

The Utility Division of the City of Laramie provides the city's drinking water, which comes from the Big Laramie River, the largest single source, and wellfields in the Casper , and it is treated in a modern plant. The Utility Division treats the city's wastewater in a plant that, replacing an older plant, began operation in 1998.