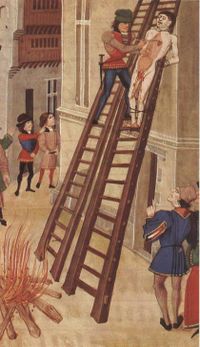 The execution of Hugh the younger Despenser, A miniature from one of the most famous manuscripts of the Chronicles.

Froissart's Chronicles was written in French by Jean Froissart. It covers the years 1322 until 1400 and describes the conditions that created the Hundred Years' War and the first fifty years of the conflict. For centuries it has been recognized as the chief expression of the chivalric revival of fourteenth-century England and France.

Inspiration and creation of Froissart's Chronicles

Jean Froissart was an eye-witness to the events of the Siege of Paris. Although it seems Froissart never saw battle, he did visit Sluys in 1386 to see the preparations for an invasion of England. The invasion was ultimately aborted. However, he was present at other significant events such as the baptism of Richard II. 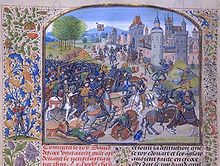 Battle of Neville's Cross from the Gruuthuse manuscript.

Froissart first wrote a rhyming chronicle for Philippa of Hainault that is now lost. He began Book I of the surviving chronicle in 1369 at the insistence of Robert de Namur. He finished it in 1373; his own experiences, combined with those of interviewed witnesses, supply much of the detail.

The other important source for the early part of the chronicle was the Vrayes Chroniques of Jean Le Bel, of which Froissart directly copied large parts. Le Bel wrote his chronicle for Jean, lord of Beaumont; and Jean's grandson, Guy II, Count of Blois. He later became the patron of Book II of Froissart's Chronicles. This second volume of Froissart's Chronicles was completed in 1388 and is entirely Froissart's work. Book III was completed in 1390 and Book IV in 1400.

Historical events included in the Chronicles 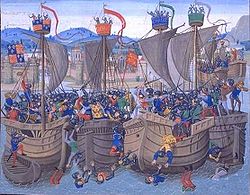 The Battle of Sluys in the Gruuthuse MS.

Some of the important events recorded in Froissart's Chronicles:

Froissart's work is perceived as being of vital importance to modern understanding of 14th century events. However, modern historians also recognize that his Chronicles betray many shortcomings: erroneous dates, misplaced geography, inaccurate estimations of casualties, and biases in favor of his patrons. He also omits information about the common people of the time. Sir Walter Scott once remarked that Froissart had "marvelous little sympathy" for the "villain churls."

The Chronicles are almost 3 million words long, yet few complete editions are published. Froissart is often repetitive or covers insignificant subjects. Nevertheless, his battle descriptions are lively and engaging; he provides a wealth of information for the social historian. Enguerrand de Monstrelet continued the chronicle to 1440.

The text of Froissart's Chronicles is preserved in more than 100 manuscripts which are illustrated by a variety of miniaturists. One of the most lavishly illuminated copies was commissioned by Louis of Gruuthuse, a Flemish nobleman, in the 1470s. The four volumes of this copy (BNF, Fr 2643-6) contain 112 miniatures painted by the best Brugeois artists of the day. Among them is Loiset Lyédet, to whom the miniatures in the first two volumes are attributed. The illustrations here come from this copy.