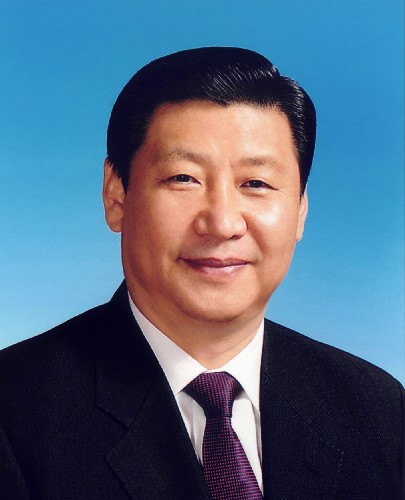 Xi Jinping (zh-stp|s=习近平|t=習近平|p=Xí Jìnpíng; : Sip Kin-ping, born ) is a senior leader of the . He currently serves as the country's Vice-President, the top-ranking member of the , Principal of the , and the 6th ranked member of the , China's "de facto" top power organ.

Xi served mostly in province in his early career, and was later appointed party chief of the neighbor province, and then was appointed as 's party chief following the dismissal of . Known for his liberal policies, tough stance on corruption, and a frank openness about political and market economy reforms [ [http://www.newsweek.com/id/81558/page/2 Newsweek:Xi Jinping: China’s New Boss And The ‘L’ Word] ] , his combination of positions makes Xi the heir presumptive to current Chinese paramount leader and the emerging leader of the 's "fifth generation of leadership".

Xi Jinping was born in June in Beijing, and is by Chinese convention, a native of , his ancestral home. He is the youngest son of , one of the founders of the Communist guerrilla movement in Province in northern China and former Vice-Premier. At the time his father served as the head of the Communist Party's propaganda department, and later Vice-Chairman of the . At age 10, during the Cultural Revolution, Xi's father was purged and was sent to work in a factory in , and jailed in . Without the protection of his father, Xi went to work in , , in in 's Socialist Re-education movement. He later became the Party branch Secretary of the production team. When he left in , he was only 22 years old. When asked about this experience later by state television, Xi recalled it saying, "...it was emotional. It was a mood. And when the ideals of the Cultural Revolution could not be realised, it proved an illusion...". [ [http://www.guardian.co.uk/world/2007/oct/26/china.uknews4 Most corrupt officials are from poor families but Chinese royals have a spirit that is not dominated by money: The Guardian. Retrieved June 11 2008] ]

From 1975 to 1979 during , Xi studied Chemical Engineering at Beijing's prestigious . From 1979 to 1982 he worked for his father's former subordinate Geng Biao in the General Office of the Central Military Commission (as an officer in active service) gained some military background.

Rising Through the Ranks

Xi joined the in 1971 and the in 1974. In he was sent to in as its party secretary. Xi subsequently served in four provinces during his political career: Shaanxi, , Fujian and Zhejiang. The younger Xi has won his spurs as the governor of Fujian, since 2000, where he made efforts to attract investment from and to boost free market economy. His career in Zhejiang was marked by tough and straightforward stance against corrupt officials, which earned him a name on the national media and drew attention from China's top leaders.

Xi held Party positions in the CPC Municipal Committee, and became the president of the Party School in Fuzhou in 1990. In 1999 he was promoted to the Deputy Governor of province, then Governor a year later. In 2002 he took up senior government and Party positions in Province, as the party chief. Xi was in turn made an alternate member of the 15th and holds the membership of the 16th CPC Central Committee, signaling his involvement nationally. While in Zhejiang, one of China's most affluent provinces, a center for the success of China's economic development, Xi provided the economic environment which secured growth rates averaging 14% per year. After the dismissal of in September 2006 due to a social security fund scandal, Xi was "airlifted" into the city as the next Party Chief of in . During his regional tenures Xi was never implicated in any serious scandals, nor did he face serious political opposition. While in Shanghai he was careful not to touch any controversial issues while largely echoing the line of the central leadership.

Xi's appointment to the Party Secretary post in Shanghai, which is arguably the most important regional leadership position in China, was seen as a sign of confidence and affirmation from President . It was seen as a stepping stone for Xi to become an emerging member of the fifth generation of Chinese leadership, a result that was solidified by his appointment as a member of the at the in . Interestingly, Xi was ranked above , which made him the most likely candidate for China's next core figure - the . This assessment was further supported at the , Xi was elected as Vice-President on . [ [http://www.chinadaily.com.cn/china/2008npc/2008-03/15/content_6539302.htm "Hu Jintao reelected Chinese president"] , Xinhua ("China Daily"), March 15, 2008.] Some suggest this was because Xi had kept friendly relations with both and the other power figure in the central leadership, .

He was put in charge of the preparations for the in Beijing. In the wake of the , Xi went and visited disaster areas in and .

Xi is considered to be the most successful of "princelings" of Chinese revolutionaries. Senior leaders consider Xi to be an emerging figure, open to serious dialogue about deep-seated market economic reforms and even political reform.Fact|date=August 2007 He is generally popular with foreign dignitaries, who are intrigued by his openness and pragmatism. regards Xi as a rising political star,Fact|date=July 2008 calling Xi "the kind of guy who knows how to get things over the goal line." [ [http://www.bloomberg.com/apps/news?pid=20601087&sid=aDpLoVnlKn6E&refer=home Bloomberg:China Appoints Xi Vice President, Heir Apparent to Hu. Retrieved June 11, 2008] ]

Xi married famous Chinese folk singer (彭丽媛) in 1987. Peng Liyuan, a household name in China, was a lot more known to the public than Xi until his political elevation. The couple frequently live apart due to their largely separate lives. They are sometimes considered China's emerging star political couple. They have a daughter named Xi Mingze, nicknamed Xiao Muzi.