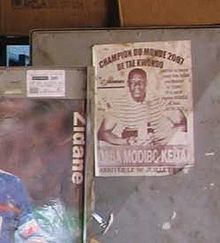 Daba Modibo Keïta has become a national hero in Mali. An image of a poster celebrating his 2007 victory next to one of Zinedine Zidane in a Bamako shop, April 2008.

Daba Modibo Keïta (born 5 April 1981) is an Malian Taekwondo athlete. Keïta has competed in international competitions since 1996, and in 2007 became the Heavyweight (+84 kg) division 2007 World Taekwondo Champion in Beijing, and in 2008 competed at the 2008 Summer Olympics in the +80 kg class.

Keïta was born in Abidjan (Côte d'Ivoire) to Malian parents, and was named for the first President of Mali, Modibo Keita. He was forced to flee the country with his family in 2000 during the wave of xenophobia which preceded the Ivorian Civil War. Settling in Mali, Keïta had little funding for training, but received an IOC Olympic Solidarity Scholarship to pay for his training with Ivory Coast fighter Patrice Remarck in the United States .[1] With coach Jorge F. Ramos, finances forced Keïta to stay with friends in Beijing during the 2007 world championship and train in a hotel courtyard. Keïta is managed by his older brother, Badra, and has lived and trained in France and the United States. Two of his brothers and two of his five sisters practice taekwondo, with his sisters both blue belts.[2]

Despite tearing a back muscle before the match, Keïta won the gold medal for the Heavyweight (84 kg) division 2007 World Taekwondo Champion in Beijing by beating Iranian Morteza Rostami 3 to -1 in the final. He is the first Sub-Saharan African to hold the title of Taekwondo World Champion, and has become a national hero in Mali.[3] Keita himself has reflected that “Winning the world title was almost unthinkable for an African, or someone from a developing nation.” [2]

Keïta has become a national figure, making public appearances and meeting several times with the President Amadou Toumani Touré, who personally saw Keïta off to the Olympics.[4] In part through Keïta's success, Taekwondo has exploded in popularity in the nation. In 2008 the Mali boasted over 150 clubs federated to the Fédération malienne de taekwondo (FEMAT)[5] and 500 black belts among the almost 15,000 Malians who practise the sport.[2]

He represented Mali at the 2008 Summer Olympics in Beijing, and was favoured before the games to win the first Olympic Gold Medal for Mali in history.[6] He was quoted in August saying "For any athlete the Olympic Games are a dream... ...Africa really needs this medal."[7]

Keïta was flag bearer for his nation at the opening ceremony, and competed in the 80 + kg Olympic division, beginning 23 August 2008. In the first round, Keïta defeated Mickael Justin Borot 6-5 to advance to the quarterfinals[8] but was knocked out by eventual bronze medalist Nigerian Chika Yagazie Chukwumerije 3 - 2 in extra time.[9]

Much expectation had been placed on the world champion in Mali, which had never won any Olympic medal. After Keïta's loss, the president of Mali, Amadou Toumani Touré, was quoted in the state run paper l'Essor, saying that this was "A painful day for Mali".[10] The paper announced the loss as "an immense disappointment for the nation."[11]