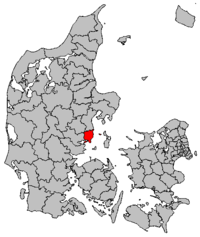 Odder municipality is a municipality in Region Midtjylland on the east coast of the Jutland peninsula in central Denmark just south of Aarhus and is a part of the greater Aarhus area. The municipality includes the islands of Alrø and Tunø, and covers an area of 225 km². It has a total population of 21,562 (2008). The current mayor is Elvin J. Hansen of the Social Democrats.

The main town and the site of its municipal council is the town of Odder. Other towns in the municipality include Hou, Gylling, Saksild, Hundslund and Ørting.

The island of Alrø is connected to the Jensnæs peninsula on the mainland by a damm and during summer time a bicycle ferry connects Alrø to the town of Snaptun in neighboring Hedensted municipality.

Car ferry service connects the mainland via Hou harbour to the island of Tunø, and to Sælvig port on the island of Samsø. Both of these islands are located in the Kattegat.

The town of Odder

The town of Odder is located south of the city of Aarhus. The 26.5 kilometer Odderbanen train line connects the town and other towns in the municipality to Aarhus. The railway line is affectionately known as Oddergrisen ("The Odder Pig"). The original A/S Hads-Ning Herreders Jernbane train line was established in 1884.