The Military of the Ottoman Empire used a variety of weapons in their conquests throughout the centuries. The armoury in Topkapı Palace has a large collection of which it shows select items. 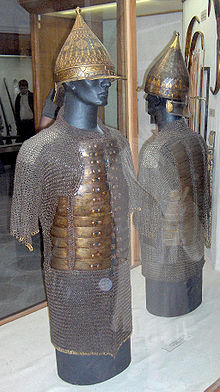 Ottoman armour (Turkish: zırh) of the 15th and 16th centuries was made with interlocking rings of flattened metal and was reinforced at the front, underarms and back with rectangular steel plates, similar to the Coat of Ten Thousand Nails. This had several advantages. It permitted a wider range of motion and its open structure allowed air to circulate freely, keeping the wearer cooler. Additional garments could be worn over the mail for protection against the weather. During the Middle Ages the Turks invented an advanced helmet called the Zischagge which was later worn by German soldiers in the 30 years war and Roundhead Ironside cavalry during the English Civil War. 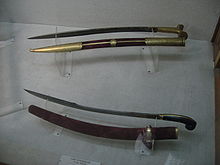 Yataghans from the 17th-19th century CE

The Yataghan (yatağan) makes its appearance in the second half of the 16th century, and is an infantry weapon in which the hilt is generally made of bone or ivory and the pommel is flared. Its short, slightly curved blade is sharp on one edge and comes to a fine point. This form continues unchanged until the end of the 19th century. The yataghan was widely used in both the Ottoman army and navy.

The Ottoman cavalry sabre "kilij is the final evolution of central asian Turko-Mongol saber to produce a design more useful in the mounted close combat preferred by the Turkish and Mamluke troops. It was a one-handed saber with a slight curvature enough to cut and thrust effectively; Sharpened back edge at the final section of the blade known as "yalman" was specific to kilij.

A (kılıç) consists of a blade which is usually grooved, a hilt, guard and scabbard. Its basic form is illustrated by the sword of Sultan Mehmed II, with its slightly curved blade that thickens at the back. During the reigns of Sultan Bayezid and Suleiman I, the Turkish sword attained its classic form, becoming shorter, lighter and straighter. These changes made it a more effective and efficient weapon. Swords are usually embellished with inscriptions and motifs typical of the period. 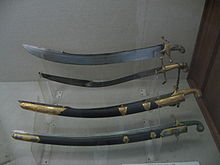 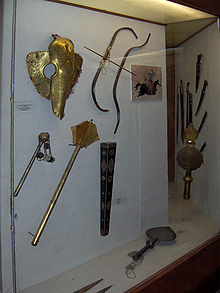 Bows and arrows and maces

There are three kinds of bows : war (tirkeş), target (puta), and long-range (menzil) bows. All three types were made of four materials: wood, horn, tendon and adhesive. A grip (kabza) is located at the centre of each bow. They are generally decorated in lacquer technique.

The shaft of arrows was made of pine and the head of iron, brass, or bone. At the end of the arrow are feathers to stabilise flight and knoted nock (gez) to hold the arrow firmly against the bowstring.

The typical helmet (miğfer) in the 15th and early 16th centuries was conical in form, swelling gently from the base and curves as it tapers to its apex. At the front it had a visor and nasal and along the sides and back a neck guard of chain mail. In the 16th century under Mamluk influence it assumed a more conical and smaller form. This shape continued throughout the 17th and 18th centuries. 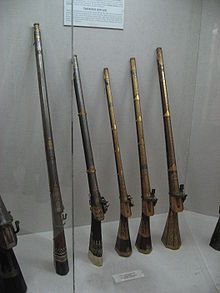 Although the Ottoman army began using muskets (tüfek) in the 16th century, the earliest examples of Turkish manufacture date to the early 17th century. By the middle of the 17th century, most of these muskets, with their simple matchlock firing mechanisms were converted to use the Spanish style patilla miquelet lock. These continued to be used until the end of the 19th century, undergoing minor changes as a result of Western influence.

The start of the use of artillery in the Ottoman Army is not very definite. One of the arguments is that the Ottomans used cannons in the Battles of Kosovo (1389) and Nukap (1396) and most certainly by 1420s.[1] However the other argument states that field guns entered service shortly after the Battle of Vanna (1444) and more certainly used in the Second Battle of Kosovo (1448).[2]

The Balkans was used by the Ottomans as both a human and technical source concerning the advancement and the use of their artillery pieces.[3] Bosnia and Serbia particularly along with Italy and Germany was an important cog for the Ottoman Army. Specialist ‘topcu’ or artillery units were formed mainly of Christians; units such as tayfa-i efreciye . In the siege of Baghdad where the Ottomans retook the city from the Persians (1638), gunners of European descent served on the lines.[4] Although the payroll registry records were not good at keeping up with the number of gunners because the combrades of those deceased collected the money on their behalf. The table below gives us a clear view of the trends.[5]

One of the greatest advancements in Ottoman fire arms came in the reign of Beyazid II who improved the design of field artillery pieces and many other firearms ranging from muskets to ‘tufeks’. To add to this the 16th century brought the latest technical advancements in gun making to the Ottomans; in the form of Jews fleeing from the Spanish Inquisition. 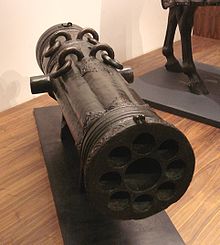 Archivial evidence supports the notion that the Ottoman artillery was famous for the size of its cannon, and their number; from the highly mobile antipersonnel Abus gun to the massive Great Turkish Bombard.These bombars were a product of specialised study in the production of 'giant guns' known literally as castle smashers 'kale-kob'.Although such weapons being primarily used in sieges; where they were cast on site due to the logistical difficulties attributed to transport them there, they were used as late as 1809 massive stone-firing guns were used with some effect against British ships during the Dardanelles Operation, throwing 1000-pound marble with a range of 1 mile. Accuracy was achieved by using wadded shots wraped in sheep skin with ready measured stacks of powder. Unlike the European powder, the Ottoman powder is thought to be better for upon firing it produced white smoke rather than black smoke.

The most famous battle in which these bronze 'bombards' were used is at the siege of Constantinople in 1453. The bombards weighed 19 tons, took 200 men and sixty oxen to emplace, and could fire just seven times a day. The Fall of Constantinople was perhaps "the first event of supreme importance whose result was determined by the use of artillery" when the huge bronze cannons of Mehmed II, made by the Hungarian Orban, breached the city's walls, ending the Byzantine Empire, according to Sir Charles Oman.[6]

The most commonly used gun is known as a battering gun (darbzen). This gun fired 0.15-2.5 kg shots in weight. These guns were used more in fortresses as the emphasis was given to small to medium calibre guns. Small calibre bronze pieces were also used on galleons and river boats, they weight between 3.7-8.6 kg. However most river boats had an armoury of cast iron guns which fired 500g shots, on average they weighed between 20–40 kg.The ‘balyemez’ was a medium weight, long raged cannon which fired shots weighing 31–74 kg.‘Şahalaz’ was light cannon, this was mainly used on river boats and was a cast iron cannon firing 500g shots. ‘Şayha’ was a gun of various sizes used predominantly on riverboats mainly in the Danube. It weighed between 31–74 kg. 16th and 17th centuries gave rise to other types of cannons which the Ottomans used such as the‘Saçma topu’ (grapeshot) and the ‘Ağaç topu’ (petard).[7][8][9] 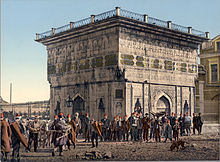 The ammunition used by the bronze bombards were stone balls, 1 meter in diameter and weighed 400 kg. The transportation of just two bombards proved to be a logistically challenging task. They were dragged to the Fall of Constantinople by 70 oxen and 1000 men. The casting of these bombards are described by Kritoboulos 1467. He describes the clay mould and the core which was strengthened by iron, wood, earth and stone. 45 tonnes of copper and tin are said to be placed in two furnaces constructed out of large stone blocks, laid with cement and covered by fire bricks and smeared in clay. Logs of wood along with charcoal are placed inside the furnace and all the holes except the tapping channels are closed. Then bellows are put to work until the metal inside is in a fluid state. The liquid bronze is then poured in to the clay mould where it is then chiseled and polished.[10]

Mehmet II erected many cannon-foundries in Istanbul, the most famous of which is the Tophane foundry which produced bronze cannons for siege warfare. It made large bombards which had a diameter of 60 to 100 cm and in 1562 alone it cast a total of 1012 guns weighing all together 481 tonnes.[11]