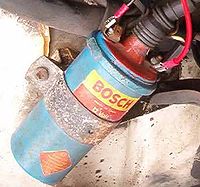 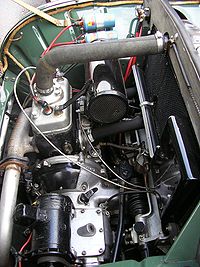 An ignition coil (also called a spark coil) is an induction coil in an automobile's ignition system which transforms the battery's 12 volts (6 volts in some older vehicles) to the thousands of volts (20 to 30 thousand volts or more) needed to create an electric spark in the spark plugs to ignite the fuel. Some coils have an internal resistor to reduce the voltage and some rely on a resistor wire or an external resistor to reduce the voltage from the car's 12 volt wiring flowing into the coil. The wire which goes from the ignition coil to the distributor and the wires which go from the distributor to each of the spark plugs are called spark plug wires or high tension leads.

This specific form of the autotransformer, together with the contact breaker and a capacitor (still referred to in automobile parlance by its old name of "condensor"), converts low voltage from a battery into the high voltage required by spark plugs in an internal combustion engine.

When the contact breaker closes, it allows a current from the battery to build up in the primary winding of the ignition coil. (The current does not flow instantly because of the inductance of the coil.) Once the current has built up to its full level, the contact breaker opens. Since it has a capacitor connected across it, the primary winding and the capacitor form a tuned circuit, and as the stored energy oscillates between the inductor formed by the coil and the capacitor, the changing magnetic field in the core of the coil induces a much larger voltage in the secondary of the coil. More modern electronic ignition systems operate on exactly the same principle, but some rely on charging the capacitor to around 400 volts rather than charging the inductance of the coil.

In older vehicles a single (large) coil would serve all the spark plugs via the ignition distributor. Notable exceptions are the Saab 92, and the Wartburg 353 which have one ignition coil per cylinder.

In modern systems, the distributor is omitted and ignition is instead electronically controlled. Much smaller coils are used with one coil for each spark plug or one coil serving two spark plugs (for example two coils in a four-cylinder engine, or three coils in a six-cylinder engine). A large ignition coil puts out about 20 kV, and a small one such as from a lawn mower puts out about 15 kV. These coils may be remotely mounted or they may be placed on top of the spark plug (coil-on-plug or Direct Ignition). Where one coil serves two spark plugs (in two cylinders), it is through the "wasted spark" system. In this arrangement the coil generates two sparks per cycle to both cylinders. The fuel in the cylinder that is nearing the end of its compression stroke is ignited, whereas the spark in its companion that is nearing the end of its exhaust stroke has no effect. The wasted spark system is more reliable than a single coil system with a distributor and less expensive than coil-on-plug.

Where coils are individually applied per cylinder, they may all be contained in a single molded block with multiple high-tension terminals. This is commonly called a coil-pack.

A bad coil pack may cause a slight or not so slight misfire, bad fuel economy, loss in power, and in some rare cases loss of braking performance and power steering problems.

The disruptive discharge Tesla coil is an early predecessor of the "ignition coil" in the ignition system as was invented in 1891. Tesla also gained U.S. Patent 609,250, "Electrical Igniter for Gas Engines", on August 16, 1898. The principles of the modern ignition coil used today is based on this design. A. Atwater Kent, in 1921, patented the modern form of the ignition coil.