Faurot Field (pronounced /fɔːˈroʊ/) at Memorial Stadium is the home field of the University of Missouri Tigers in Columbia, Missouri. It is primarily used for football. In 1972, Memorial Stadium's playing surface was named Faurot Field in honor of longtime coach Don Faurot. During the offseason, soccer goals are set up in the end zones and it is used for intramural matches. It also hosts the annual "Providence Bowl" game between Hickman and Rock Bridge high schools (so named because both schools are located on Providence Road in Columbia, and Faurot is roughly equidistant between the two) and in the past has been home to the MSHSAA football championships, now held in St. Louis (taking advantage of the climate-controlled atmosphere of the Edward Jones Dome). It is the second largest sports facility by capacity in the state of Missouri, second to Arrowhead Stadium in Kansas City.

The stadium is a typical horseshoe-shaped stadium, with seating added on in the "open" endzone. The horseshoe is completed by a grass berm in the curved end, which is used for general admission on game days. The berm is famous for the giant block "M" made of painted white stones located behind the endzone. This distinctive feature has not been immune to pranks, such as enterprising Nebraska or Kansas fans attempting to change the "M" to an "N" or a "K", but groundskeepers and students have in the past protected what may be the stadium's best-known landmark. One of the traditions of the football team is that seniors, after playing their final home game, take a rock from the "M" as a souvenir. It is also traditionally whitewashed every year by incoming freshmen during welcoming activities.

There is road between the field and the stands around the entire length of the horseshoe, taking the place of the track, removed in the mid-1990s.

Fundraising began in 1921 for a "Memorial Union" and a "Memorial Stadium" to be constructed at the University. The names of the two projects were a tribute to Mizzou alumni who lost their lives during World War I. Ground was broken on the site of the future stadium in December 1925. The site was a sizeable natural valley that lay between twin bluffs south of the campus. Original plans called for the stadium to seat 25,000, with proposed stages of expansion in capacity to 35,000, 55,000, 75,000 and 95,000. According to legend, a rock crusher and truck were buried during initial blasting, and they still remain buried under the field.

Memorial Stadium was dedicated on October 2, 1926, to the memory of 112 alumni and students who lost their lives in World War I. The 25,000-seat stadium was built with a 440-yard (400 m) track that circled the playing field. That first October game against Tulane was marred by rainstorms that washed out a bridge into Columbia coming from the western side of Missouri. While the game sold out, the field could not be sodded due to the wet conditions. Therefore, a surface of sawdust and tree bark was used, and "the Tigers and Green Wave played to a scoreless, mudpie tie", in the words of sportswriter Bob Broeg. Grass would be installed thenafter until the 1980s.

The highly recognizable rock 'M' of the northern end zone debuted on October 1, 1927, to a 13-6 victory over Kansas State. The monument was built by members of the freshman class using leftover rocks from the original stadium construction. The 90 ft (27 m) wide by 95 ft (29 m) high 'M' has continued to watch over the field and provide seating for fans since that day.

Mizzou earned its largest margin of victory ever at Memorial Stadium on September 17, 2011. Under Coach Gary Pinkel, the Tigers defeated Western Illinois University by a score of 69–0.

In recent years, several major renovations have taken place at Faurot Field. During the summer of 1978, the south endzone was enclosed with 10,800 permanent seats, which brought total seating capacity to 62,023.

On May 18, 1985, the project began to convert the natural grass surface to a new artificial surface called Omniturf. The conversion was completed on August 30. Missouri was the last school in the Big Eight Conference to switch from grass to artificial turf. Six of the other seven conference schools switched to artificial turf in the early 1970s, and Iowa State followed suit in 1975 when the Cyclones' new Jack Trice Stadium opened. The first game on the new artificial turf was a 27–23 loss to Northwestern University played on September 14, 1985. The Tigers went on to finish 0–7 at home during the 1985 season. The OmniTurf surface became infamous to Tiger fans as the "lousy field" on which The Fifth Down Game was played on October 6, 1990. Troubles continued on the artificial surface, and in 1992, Big Eight Conference coaches issued a statement that read, in part: "Big Eight Conference football coaches wanted to report that the football field at the University of Missouri is a detriment to the home and visiting teams and takes away from the integrity of the game played on such a field."[6]

On September 18, 1994, The Rolling Stones performed, during their Voodoo Lounge Tour, before 45,000 fans at Memorial Stadium in a concert that raised almost $100,000 for the conversion of the Omniturf surface back to natural grass. The final game on the infamous Omniturf surface was played on November 19 of that same year against the University of Kansas, a 31-14 Kansas victory. Mizzou's all-time record on the Omiturf was a disappointing 20–38–3. 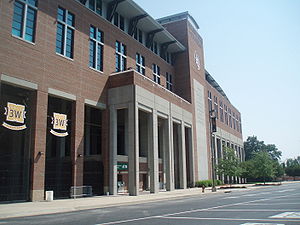 The new 15-story state-of-the-art facility containing press boxes, suites, and a restaurant was constructed in 2000. Outside the Stadium 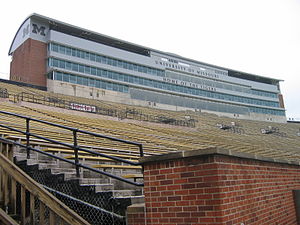 The new 15-story state-of-the-art facility containing press boxes, suites, and a restaurant was constructed in 2000. Inside the Stadium 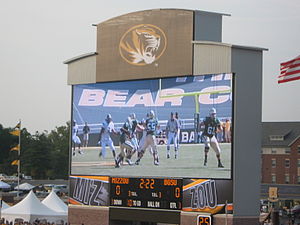 The new Daktronics video board installed before the start of the 2009-2010 football season. Close view. 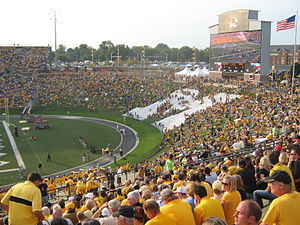 The new Daktronics video board installed before the start of the 2009-2010 football season. View from section QQ.

The artificial Omniturf playing surface was removed and replaced with natural grass over the summer of 1995. Legendary Coach Don Faurot put down the last piece of sod as a symbolic gesture. Faurot had helped to lay the sod of the original playing surface in 1926. He died later that year in October, during Homecoming week. As part of the installation of the new playing surface, grass-covered terraces were extended up from the field to the seating area, where they met a new low brick wall that was designed to give Memorial Stadium a traditional college ambiance. The brick wall also honors the greatest figures in Tiger football (including Faurot, Kellen Winslow and Dan Devine) by listing the team's honored numbers on each panel. The first game on the new natural grass resulted in a 28–7 victory for Mizzou over North Texas. The game was also historic as the first game played under permanent lights—previously, night games only were played under temporary lights paid for by television broadcasters, and as part of the renovations four large light stanchions were erected outside each corner of the stadium.

In 1996,[7] the press box was upgraded to a 15-story building containing state-of-the-art facilities for the coaches and media, as well as several executive suites, hundreds of premium club seats and a restaurant. 1997 saw the installation of a video board in the north ("M") end[6] and a refurbishment of the concourses, with new signage and expanded concessions. FieldTurf replaced the natural grass in 2003. In 2005, the south end's antiquated auxiliary scoreboards were replaced with new ones, as well as a second high-definition video monitor.

Many fans have expressed interest in expanding the south stands to be more uniform with the rest of the stadium, adding features such as bathrooms and permanent food stands in the process. However, this project may be hampered by the fact that the south end is very close to the water table, and that any added construction will run into problems associated with this. 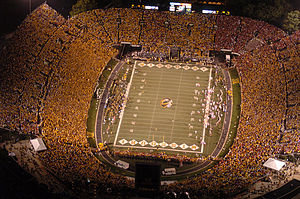 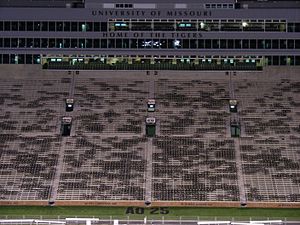 A view of the west stand, known to fans as the "Alumni Stand" 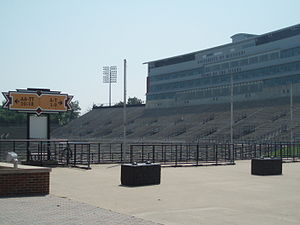 Picture of the west stands at Faurot Field. 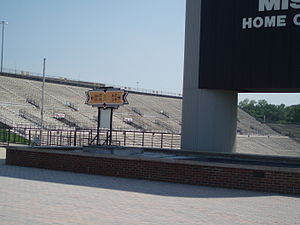 Picture of the east stands at Faurot Field.

The stadium officially holds 71,004 people. The record attendance for Faurot Field is 75,298 when Missouri hosted Penn State on October 4, 1980.