Chefchaouen or Chaouen (Berber: ⵜⵛⴻⴼⵜⵛⴰⵡⴻⵏ Accawn, Arabic: شفشاون/الشاون‎, Spanish: Chauen, lit. "horns") is a city in northwest Morocco. It is the chief town of the province of the same name, and is noted for its buildings in shades of blue.

Chefchaouen is situated in the Rif Mountains, just inland from Tangier and Tetouan. The city was founded in 1471,[1] as a small fortress which still exists to this day, by Moorish exiles from Spain led by Moulay Ali Ben Moussa Ben Rached El Alami to fight the Portuguese invasions of northern Morocco.[2] It was known as one of the main concentrations of Moriscos and Jews who sought refuge in this mountainous city after the Spanish Reconquista in medieval times.[3] In 1920, the Spanish seized Chefchaouen to form part of Spanish Morocco. Spanish troops imprisoned Abd el-Krim in the kasbah from 1916 to 1917, after he talked with the German consul Dr. Walter Zechlin (1879–1962). (After defeating him with the help of the French force Abd el-Krim was deported to Réunion in 1926). Spain returned the city after the independence of Morocco in 1956. 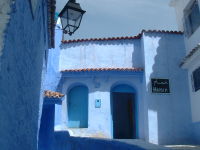 A typically blue-rinsed hammam in Chefchaouen

Chefchaouen or Chaouen, as it is often called by Moroccans, is a popular tourist destination because of its proximity to Tangier and the Spanish enclave of Ceuta. The name refers to the shape of the mountain tops above the town, that look like the two horns (chaoua) of a goat. "Chef Chaouen" derives from the Berber word for horns, Ichawen. There are approximately two hundred hotels catering to the summer influx of European tourists. One distinction possessed by Chefchaouen is its blue-rinsed houses and buildings.

Chefchaouen is a popular shopping destination as well, as it offers many native handicrafts that are not available elsewhere in Morocco, such as wool garments and woven blankets. The goat cheese native to the area is also popular with tourists.

The countryside around it has a reputation for being a prolific source of kief. The Chefchaouen region is one of the main producers of cannabis in Morocco. Hashish is subsequently sold all over town, but is mostly the domain of native Chaouenis.

The growing tourist industry is geared especially towards Spanish tourists, who are especially numerous during great Catholic feasts like Semana Santa and Christmas. Chefchaouen was visited by Joe Orton and Kenneth Halliwell in 1967. They adored it finding it "very 'Golden Bough-ish'."[citation needed] Orton mentions their trip in the Orton Diaries.

There are a number of distinct mosques in the town. Aside from the mosque at Place Uta Hammam in the medina, there is also a mosque dedicated to the patron saint of Northern Morocco's Jebalah region, Moulay Abdeslam Ben Mchich Alami. His tomb and the village surrounding it is by the way an hour's drive or so from Chefchaouen on the old road to Larache.

Chefchaouen is home to the only octagonal minaret in Islam. There is also a ruined mosque built by the Spanish, with stairs still in the tower.