Maryland Route 404 is a major highway on Maryland's Eastern Shore in the United States. It runs 24.61 miles (39.61 km) from Maryland Route 662 in Wye Mills on the border of Queen Anne's and Talbot Counties, southeast to the Delaware state line in Caroline County, where the road continues as Delaware Route 404 to Nassau (near Rehoboth Beach). The Maryland and Delaware state highways together cross the width of the Delmarva Peninsula and serve to connect the cities west of the Chesapeake Bay by way of the Chesapeake Bay Bridge and U.S. Route 50 with the Delaware beaches. Along the way, MD 404 passes through mostly farmland and woodland as well as the towns of Queen Anne, Hillsboro, and Denton. The road is a two-lane undivided highway for most of its length with the exception of the bypass around Denton, which is a four-lane divided highway.

MD 404 was designated in 1940 to run from Matapeake (where the Annapolis-Matapeake ferry across the Chesapeake Bay connected the route to Annapolis), east along present-day Maryland Route 8, Maryland Route 18, and Maryland Route 662 to Wye Mills (where it follows its current routing to the Delaware border). By 1948, the route’s western terminus was moved to Maryland Route 2 north of Annapolis, where it headed east across the Chesapeake Bay on the Sandy Point-Matapeake ferry. The MD 404 designation was planned for the Chesapeake Bay Bridge; however, US 50 was extended onto the Eastern Shore and MD 404’s western terminus was cut back to its current location in Wye Mills. A few realignments of the route have taken place since then, including a bypass of Queen Anne and Hillsboro, a segment east of Hillsboro by 1960, and the bypass of Denton built in the 1980s.

Since MD 404 is the main route for travelers between the Chesapeake Bay Bridge and the Delaware beaches, the road has a high accident rate. To improve on this situation, the Maryland State Highway Administration is planning to widen the two-lane portions of the route into a four-lane divided highway. A portion of the road east of the Tuckahoe Creek in Caroline County is receiving $7.7 million for widening as a part of the stimulus bill signed into law by President Barack Obama in 2009. 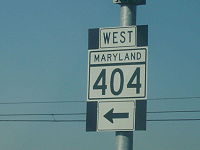 Maryland Route 404 begins at an intersection with Maryland Route 662 (Old Wye Mills Road) in Wye Mills on the border of Queen Anne's and Talbot Counties, heading to the east on Queen Anne's Highway, a two-lane undivided road with a 30 mph (48 km/h) speed limit.[1] It heads east through farmland along the Queen Anne's/Talbot County border, with the speed limit increasing to 45 mph (72 km/h), before reaching an intersection with U.S. Route 50 (Ocean Gateway).[4] Upon crossing US 50, MD 404 becomes a part of the main route between the Chesapeake Bay Bridge and the Delaware beaches.[1][5] MD 404 continues east through farmland with some residences and wooded areas as a 55 mph (89 km/h) two-lane road, approaching the town of Queen Anne.[1][4]

Further east, Old Queen Anne Road splits from MD 404, with MD 404 crossing entirely into Queen Anne's County.[1] It resumes east through some farmland before coming to an intersection with Maryland Route 309 (Starr Road).[4] Past MD 309, the route intersects the northern terminus of Maryland Route 303 (Main Street), which intersects the route as a northbound-only road that provides access to eastbound MD 404. From MD 303, the road heads into wooded areas adjacent to Tuckahoe State Park, crossing the abandoned Chesapeake Railroad right-of-way before crossing the Tuckahoe Creek.[2][4] 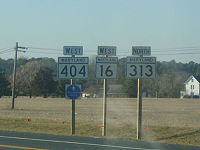 Maryland Route 404 enters Caroline County upon crossing the Tuckahoe Creek, where it becomes Shore Highway.[3] It emerges from the woods into agricultural areas, intersecting Maryland Route 480 (Ridgely Road) near Hillsboro. Past that intersection, the route heads through a mix of woods and residences before intersecting Maryland Route 404 Alternate (Hillsboro Road), where MD 404 heads into a mix of farms and woodland.[3][4] Unsigned Maryland Route 485 (Saathoff Road) loops to the south of MD 404, returning to the route before the intersection with the southern terminus of Maryland Route 312 (Downes Station Road).[3] The route continues to the southeast through farms, heading toward Denton. As the road approaches Denton, it widens into a four-lane divided highway that heads through rural areas with some residences and businesses.[4] Maryland Route 404 Business (Meeting House Road) splits from MD 404 to head through the center of Denton while MD 404 continues east to bypass Denton to the north.[3]

The route continues east through fields before intersecting Maryland Route 328 (New Bridge Road).[4] Past this intersection, MD 404 crosses over the Choptank River. It continues east as a limited-access road with a diamond interchange with Maryland Route 313 (Greensboro Road) and unsigned Maryland Route 619 (Sixth Street), where some businesses are located.[3][4] MD 313 forms a concurrency with MD 404 and the two routes turn south, heading along the eastern side of Denton through woodland and then past residential neighborhoods. It turns to the southwest, heading into woods and intersecting Maryland Route 404 Business (Franklin Street/Gay Street) at an at-grade intersection. MD 313 and MD 404 continue as a surface road that turns south and heads through some commercial areas as a 40 mph (64 km/h) road.[3][4]

The speed limit increases back to 55 mph (89 km/h) and the road heads south into farmland, passing by Martinak State Park. It crosses over Watts Creek and comes to an intersection with Maryland Route 16 (Harmony Road), with that route joining MD 313 and MD 404 for a three-way concurrency.[3][4] The three routes continue southeast, narrowing into a two-lane undivided road that heads through a mix of woods and farms with some homes.[4] The road turns more to the east-southeast, with MD 313 splitting from MD 16 and MD 404 by heading south on Federalsburg Highway in Andersontown. The road turns southeast and in a short distance, MD 16 splits from MD 404 by heading east on Greenwood Road.[3][4] Past this intersection, MD 404 continues southeast through farmland and woodland to the Delaware border, where the road continues as Delaware Route 404, which runs east to an intersection with Delaware Route 1 in Nassau (near Rehoboth Beach).[4]

When Maryland started numbering state highways in 1927, the present-day routing of MD 404 was a state-maintained road between Queen Anne and Denton, even though the road had no assigned number then.[6] By 1940, MD 404 was designated, with the route’s western terminus in Matapeake, where the Annapolis-Matapeake ferry across the Chesapeake Bay connected the route to Annapolis in Anne Arundel County. From Matapeake, the route ran along present day Maryland Route 8, Maryland Route 18, and Maryland Route 662 to Wye Mills, where it continued east along its current route.[7] By 1948, the route's western terminus was moved to Maryland Route 2 in Anne Arundel County, crossing the Chesapeake Bay on the Sandy Point-Matapeake ferry, roughly where the Chesapeake Bay Bridge is now.[8][9] The Chesapeake Bay Bridge was originally to be designated as part of MD 404. However, it was decided for US 50 to be extended onto the Eastern Shore, replacing MD 404 between Annapolis and Wye Mills.[10] By 1960, a bypass was built for MD 404 around Queen Anne and Hillsboro with the former alignment becoming Maryland Route 404 Alternate and a portion of the route between Hillsboro and Denton was also bypassed. This former alignment of MD 404 is now known as Saathoff Road and has the unsigned Maryland Route 485 designation.[11] In the early 1980s, a four-lane divided bypass of Denton was constructed for the route and the alignment of MD 404 through Denton became Maryland Route 404 Business.[12] The divided portion highway of MD 404 in the Denton area was extended further in the 2000s from the south end of Denton to the Sennett Road intersection east of where MD 16 joins the route.[13] This project received $3 million from the federal government in 2001.[14]

The Maryland State Highway Administration is working on improvements to Maryland Route 404 in order to provide relief to travelers driving to the ocean resorts, notably by widening the remainder of the route into a four-lane divided highway.[15] The primary motive behind the widening is the high accident rate that plagues the two-lane road, brought on by beach traffic.[16] As part of the stimulus bill signed into law by President Barack Obama on February 17, 2009, $7.7 million is going to widening a portion of MD 404 east of the Tuckahoe Creek in Caroline County, creating 221 jobs.[17]

Maryland Route 404 Alternate is a 2.69-mile (4.33 km) long alternate route of Maryland Route 404 in Talbot and Caroline counties. The route runs along the former alignment of Maryland Route 404 through the towns of Queen Anne and Hillsboro.[1] The route begins at an intersection with MD 309 (Cordova Road) near Queen Anne, Talbot County, where it heads east on two-lane undivided Millsboro Denton Road. West of MD 309, Old Queen Anne Road continues west to MD 404. MD 404 Alternate passes through woodland, crossing under the abandoned Chesapeake Railroad before coming to MD 303 (Lewistown Road). At this point, the route turns north to form a concurrency with MD 303 along Talbot Avenue, and the two routes enter Queen Anne as it turns to the east. MD 303 splits from MD 404 Alternate by turning north on Main Street, while MD 404 Alternate continues east past homes, intersecting Maryland Route 518 (First Street).[1][18] As the road runs a short distance to the south of the Tuckahoe Creek, there is an industrial building on the south side of the road.[18] Upon crossing the Tuckahoe Creek, MD 404 Alternate enters Hillsboro in Caroline County and becomes Hillsboro Road.[3] The route continues through residential areas of the town. Upon leaving Hillsboro, the road heads into agricultural areas with a few homes and a patch of woods.[18] MD 404 Alternate ends at an intersection with MD 404 east of Hillsboro.[3]

Maryland Route 404 Business is a 2.32-mile (3.73 km) long business route of Maryland Route 404 through the town of Denton in Caroline County. The route runs along the former alignment of Maryland Route 404 that was bypassed by the divided, four-lane Denton Bypass.[3] MD 404 Business branches off from MD 404 west of Denton by heading southeast on a two-lane divided road called Meeting House Road that soon becomes undivided as it passes through farmland with some businesses. As it comes to MD 328 (New Bridge Road) in West Denton, the route passes near residences.[3][19] The road crosses the Choptank River into Denton, where it becomes Franklin Street. Shortly after the river, MD 404 Business splits into a one-way pair that follows Franklin Street eastbound and Gay Street westbound. [3] The one-way pair, which has two lanes in each direction, carries the route through the residential and commercial downtown of Denton, where it intersects Maryland Route 619 (Sixth Street). In the eastern part of Denton, the two directions of MD 404 Business turn south and join again, becoming a four-lane divided highway with the Franklin Street name that runs through woodland.[3][19] MD 404 Business ends at MD 313 and MD 404 a short distance later.[3]