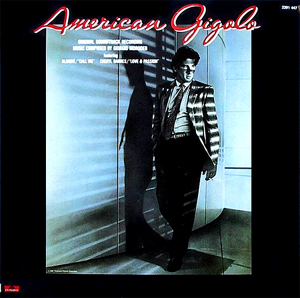 "American Gigolo" is the name of a 1980 soundtrack album to the movie of the same name, starring and . The music was composed and performed by and was released worldwide on the label.

"Call Me (Theme from American Gigolo)" by Blondie is the lead song for the popular soundtrack and a portion was played during the film's intro. The song, in the early stages an instrumental demo titled "Man Machine", had originally been offered to 's , but Nicks declined and Blondie instead recorded the song with lyrics by lead vocalist . The single, released on Blondie's label in February of 1980, was a number one hit in both the U.S. and the U.K. and most other parts of the world, and became their second U.S. number one, after their commercial breakthrough with 1979's "Heart of Glass". The band also recorded a Spanish language version of "Call Me", entitled "Llamame", released both in the U.S. and South America. Giorgio Moroder's instrumental track "Night Drive", another variation on the "Man Machine"/"Call Me" theme, was also issued as a single in certain territories.

The song "Love Passion" was written by director and Moroder and was performed by Cheryl Barnes, and can be heard in the movie in the gay club scene where Gere's character Julian goes to seek help from Leon, his pimp, after realising he has been framed for a murder he didn't commit.

"American Gigolo" was the second soundtrack album to be written and produced by Moroder in 1980, the first being "Foxes", which included 's hit single "On the Radio" as well as tracks by and . Later that same year he also produced what was to be his and Summer's final full-length studio album together, "The Wanderer". (1981's "" was shelved by and remained unreleased until 1996.)

The "American Gigolo" soundtrack album has been re-issued on CD by both and on the labels Polydor and Spectrum.

"All tracks written by Giorgio Moroder unless otherwise noted"