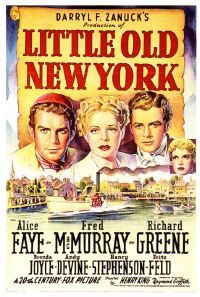 "Little Old New York" is a 1940 Fox directed by Henry King and produced by . The movie stars , and and is based on the play by . The play opened on , and starred , and .

This is one of Faye's few non-musical films. Her fans complained about her not singing in the film, so one song was included in the film. However, Faye's participation in the song was minimal.

Engineer and inventor comes to New York in 1807. Pat O'Day is a tavern keeper who supports Fulton in his inventions, but her boyfriend Charles Browne isn't that satisfied with her hanging around Robert. Every sailor turns against Robert when they are afraid of losing their job, because Robert is inventing a steamboat.