House of the Virgin Mary

House of the Virgin Mary 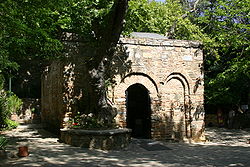 Exterior of the restored house now serving as a chapel

(For the alternative house of the Virgin Mary located in Loreto, Italy, see Shrine of the Holy House)

The House of the Virgin Mary (Turkish: Meryemana or Meryem Ana Evi, "Mother Mary's House") is a Christian and Muslim shrine located on Mt. Koressos (Turkish: Bülbüldağı, "Mount Nightingale") in the vicinity of Ephesus, 7 kilometres (4.3 mi) from Selçuk in Turkey.[1]

The house was discovered in the 19th century by following the descriptions in the reported visions of Anne Catherine Emmerich which were published as a book. [2]

Pilgrims visit the house based on the belief that Mary, the mother of Jesus, was taken to this stone house by Saint John and lived there until her Assumption (according to Catholic doctrine), or Dormition (according to Orthodox belief).[3][4]

At the beginning of the 19th century, Anne Catherine Emmerich, a bedridden Augustinian nun in Germany, reported a series of visions in which she recounted the last days of the life of Jesus, and details of the life of Mary, his mother.[5][6] Emmerich was ill for a long period of time in the farming community of Dülmen but was known in Germany as a mystic and was visited by a number of notable figures.[5]

One of Emmerich's visitors was the author Clemens Brentano who after a first visit stayed in Dülmen for five years to see Emmerich every day and transcribe the visions she reported.[5][7] After Emmerich's death Brentano published a book based on his transcriptions of her reported visions, and a second book was published based on his notes after his own death.

One of Emmerich's accounts was a description of the house Apostle John had built in Ephesus for Mary, the mother of Jesus, where she had lived to the end of her life. Emmerich provided a number of details about the location of the house, and the topography of the surrounding area:[8]

Emmerich also described the details of the house: that it was built with rectangular stones, that the windows were high up near the flat roof and that it consisted of two parts with a hearth at the center of the house. She further described the location of the doors, the shape of the chimney, etc.[8] The book containing these descriptions was published in 1852 in Munich, Germany. 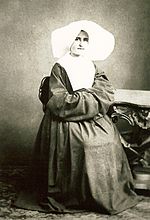 On October 18, 1881, relying on the descriptions in the book by Brentano based on his conversations with Emmerich, a French priest, the Abbé Julien Gouyet, discovered a small stone building on a mountain overlooking the Aegean Sea and the ruins of ancient Ephesus in Turkey. He believed it was the house described by Emmerich and where the Virgin Mary had lived the final years of her life.[9][2][10]

Abbé Gouyet's discovery was not taken seriously by most people, but ten years later, urged by Sister Marie de Mandat-Grancey, DC,[11] two Lazarist missionaries, Father Poulin and Father Jung, from Smyrna rediscovered the building on July 29, 1891, using the same source for a guide.[12][13] They learned that the four-walled, roofless ruin had been venerated for a long time by the members of a distant mountain village who were descended from the Christians of Ephesus. In Turkish the House is called Panaya Kapulu ("Doorway to the Virgin").[14] Every year pilgrims made a pilgrimage to the site on August 15, the date on which most of the Christian world celebrated Mary's Dormition/Assumption.[15]

Sister Marie de Mandat-Grancey was named Foundress of Mary's House by the Catholic Church and was responsible for acquiring, restoring and preserving Mary's House and surrounding areas of the mountain from 1891 until her death in 1915.[16] The discovery revived and strengthened a Christian tradition dating from the 12th century, 'the tradition of Ephesus', which has competed with the older 'Jerusalem tradition' about the place of the Blessed Virgin's dormition. Due to the actions of Pope Leo XIII in 1896 and Pope John XXIII in 1961, the Catholic Church first removed plenary indulgences from the Church of the Dormition in Jerusalem and then bestowed them for all time to pilgrims to Mary's House in Ephesus.[17] 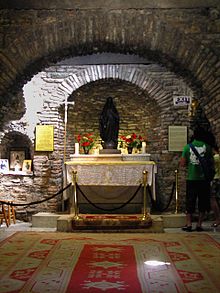 Interior of the house

The restored portion or the structure has been distinguished from the original remains of the structure by a line painted in red. Some have expressed doubt about the site, as the tradition of Mary's association with Ephesus arose only in the twelfth century, while the universal tradition among the Fathers of the Church places her residence, and thereby her Dormition, in Jerusalem.[18] Supporters base their belief on the presence of the 5th century Church of Mary, the first basilica in the world dedicated to the Virgin Mary, in Ephesus.

Position of the Catholic Church

The Roman Catholic Church has never pronounced on the authenticity of the house, for lack of scientifically acceptable evidence. It has, however, from the blessing of the first pilgrimage by Pope Leo XIII in 1896, taken a positive attitude towards the site. Pope Pius XII, in 1951, following the definition of the dogma of the Assumption in 1950, elevated the house to the status of a Holy Place, a privilege later made permanent by Pope John XXIII. The site is venerated by Muslims as well as Christians.[19] Pilgrims drink from a spring under the house which is believed to have healing properties. A liturgical ceremony is held here every year on August 15 to commemorate the Assumption of Mary. 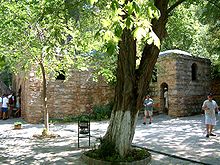 The chapel. Note the red line separating the restored part from the original remnants

Pope Paul VI visited the shrine on July 26, 1967, and 'unofficially' confirmed its authenticity. Pope John Paul II also visited the shrine, on November 30, 1979. Pope Benedict XVI visited this shrine on November 29, 2006 during his four-day pastoral trip to Turkey. The conclusion of his homily mentioned the martyrdom of Father Andrea Santoro in Trabzon which had taken place nine months prior to this visit. [20]