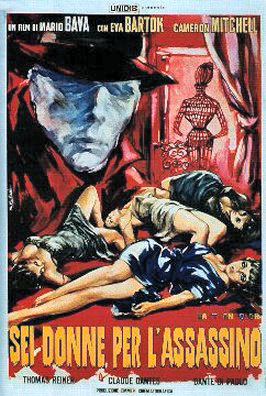 "Blood and Black Lace" (Italian title: "Sei donne per l'assassino") is a 1964 Italian horror thriller film directed by . Bava cowrote the screenplay with Giusseppe Barilla and Marcello Fondato. The film stars Cameron Mitchell and . The story focuses on the stalking and brutal murders of various scantily-clad fashion models, committed by a masked killer in a desperate attempt to obtain a scandal-revealing diary.

The film is generally considered one of the earliest and most influential of all "s", and served as a stylistic template for the “body count” s of the 1980’s. has noted that the film has "gone on to inspire legions of contemporary filmmakers, from to to ."

Isabella (Francesca Ungaro), one of many beautiful models employed at a fashion house, is walking through the grounds that lead to the establishment one night when she is attacked and violently killed by an assailant wearing a white featureless mask. Police Inspector Sylvester (Thomas Reiner) is assigned to investigate the murder and he interviews Max Marian (Mitchell), the manager who co-runs the salon with his lover, the recently widowed Countess Cristina Como (Bartok). Max attests that he can provide no information whatsoever that can assist the inspector, but as the investigation continues all of the fashion house’s various sins, including corruption, abortions, blackmail and drug addiction, begin to come to light. It is revealed that Isabella had kept a diary detailing these vices, and suddenly almost every employee becomes nervous.

Nicole (Ariana Gorini) finds the diary, and she promises to provide it to the police, but Peggy (Mary Arden) manages to steal it from her purse during work. That night, Nicole drives to an antique store owned by her lover, Frank (Dante DiPaolo). He is not there, and while inside she suddenly finds herself stalked by a black clad figure, who had apparently been waiting for her. She makes it to the front entrance door but is grabbed from behind by the masked individual, who raises and slams a spiked glove into her face, killing her instantly. The murderer searches the corpse and her purse for the diary. When it becomes clear that she did not have it, the killer runs out of the shop.

The murderer next visits Peggy’s apartment. The killer gains entrance simply by knocking on the front door, and when Peggy opens it, the masked figure abruptly walks inside. The assailant slaps and hits her repeatedly, and she explains that she no longer has the diary and had in fact burned it in the fireplace. When her attacker checks the fireplace to see if she told the truth, she tries to pick up a telephone to call for help. Enraged, the murderer hits her over and over again in the face until she is knocked unconscious. The assailant then carries her away just as the police arrive. Peggy is taken to another location and tied to a chair. The killer tortures her, demanding to know where the diary is. The woman reaches up and knocks off the mask. The shocked girl recognizes her assailant, who proceeds to brutally kill her by slowly pressing her face against the red-hot surface of a burning furnace.

Inspector Sylvester is convinced that the murderer is one of the men employed at the fashion house, so he places all of those he believes might be connected to the deaths under arrest. However, while the suspects are in custody, Greta (Lea Krugher) discovers Peggy’s corpse hidden in the trunk of her car, and is then attacked and smothered to death by the killer. After discovering the bodies of the latest victims, Sylvester releases all of the men.

Max visits Cristina and reminds her about how he had assisted in the murder of her husband. Isabella had found out that Max had been involved in the crime, and began blackmailing him. When she started asking for more and more money, Max murdered her. It was only later that Max and Cristina realized she had been keeping a diary that revealed everything. While attempting to retrieve the diary, Max had also killed Nicole and Peggy. When Max and the other men from the agency were placed under arrest, Cristina had murdered Greta to give Max an alibi for the previous killings. Now, Max tells Cristina that he once again needs her help and convinces her that after only one more death they will be safe. That night, the voluptuous Tao-Li (Claude Dantes) is drowned in her bathtub by the masked killer who, immediately after the murder, removes the mask and is revealed as Cristina. She uses a razor blade to slice the corpse’s wrists in order to make the death seem like a suicide. Cristina prepares to leave the victim’s apartment when she is interrupted by a knocking sound on the front door followed by the loud voice of a man identifying himself as the police. She decides to escape out the second story window and then tries to climb down a drainpipe, which falls under her weight, slamming her to the ground.

Later that night, Max searches through Cristina’s desk, looking for money and documents. Suddenly, a bloody and bruised Cristina enters the room, shakily holding a gun aimed directly at Max. Max had been the “policeman” knocking on Tao-Li’s front door and, knowing exactly how Cristina would attempt to escape, he had deliberately broken the drainpipe in such a way that it would be guaranteed to collapse. He attempts to smooth talk his lover and almost succeeds in getting her to hand over the gun, but she abruptly changes her mind and shoots him to death. The mortally wounded Cristina collapses next to Max's corpse.

Mario Bava’s "Black Sunday" (1960) and "Black Sabbath" (1963) were world wide commercial successes. As a consequence, Bava was given full creative control over "Blood and Black Lace". An Italian-West German co-production, the film’s backers were expecting a routine murderer-on-the-loose yarn in the Edgar Wallace-tradition. In Europe in the early 1960’s, movies based on the murder mystery novels of the incredibly prolific Wallace had become a mini- of their own. Forty or so of these titles were ultimately made, most of them produced in West Germany. Although some of the murder sequences could be vicious, the emphasis was squarely on the police procedural and mystery aspects of the narrative.

But Bava was "bored by the mechanical nature of the "

Under the working title of "L'atelier della morte" (The Fashion House of Death), the movie was shot in a six-week period between November 1963 and January 1964, filmed at the Villa Pamphili on the Gianicolo, one of the . The film's budget was low, approximately $150,000. Bava was forced to improvise numerous times during the production in order to get the technical results he wanted. Cameron Mitchell noted that in order to shoot an impressive dolly shot through the fashion house, Bava simply placed the camera on a child's red wagon. Similarly, Bava completed several s by utilzing a "makeshift seesaw contraption."

The script was written in English in order to allow easier exportation to the United States. All of the cast members spoke their lines in English, some of them phonetically. However, after the production was completed, the original English-language soundtrack was not utilized for the U.S. release prints. A completely new dubbing track was produced in Los Angeles under the supervision of Lou Moss. Nearly all of the male voices were provided by .

In Italy, "Blood and Black Lace" was a failure, grossing only 123 million lire (approximately 77,000), earning back only half of the production cost. It was subsequently nearly forgotten and became difficult to see in that country until a 1999 release of the title. In the film was a moderate financial success and helped convince the backers to shoot their subsequent Edgar Wallace-styled whodunits in color.

Because of the film's titillating combination of near-naked women and gory murder, passed on releasing "Blood and Black Lace", despite having had commercial success with Bava's previous "Black Sabbath" and "Black Sunday". AIP felt Bava's movie was "too intense, too adult for the 'kiddie trade'..."

The film received a generally mixed response at the time of its initial release from the few critics who bothered to review it. In "," A.H. Weiler complained, "Murdering mannequins is sheer, wanton waste. And so is "Blood and Black Lace", the super-gory whodunit, which came out of Italy to land at neighborhood houses yesterday sporting stilted dubbed English dialogue, stark color and grammar-school histrionics." [cite web|url=http://movies2.nytimes.com/mem/movies/review.html?title1=Blood%20and%20Black%20Lace%20%28Movie%29&title2=&reviewer=A%2eH%2e%20WEILER%2e&pdate=19651111&v_id=91049|last=Weiler|first=A.H.|title="Blood and Black Lace"|publisher=New York Times, November 11, 1965|accessdate=2007-01-30] "Variety" felt it was an "okay mystery...handsomely produced..."

The movie is now generally held to be an important title in the development of the "giallo", and is considered to be one of the major titles in the so-called “Golden Age” of Italian Horror. Almar Haflidason, reviewing the film for .co.uk, said that "Director Mario Bava stages all these murders with the flair and style that was to become a founding mantle for the "Giallo" films…Through a prowling camera style and shadow-strewn baroque sets that are illuminated only by single brilliant colours, he creates a claustrophobic paranoia that seeps into the fabric of the movie and the viewer." [cite web|url=http://www.bbc.co.uk/films/2001/04/10/blood_and_black_lace_1964_review.shtml|last=Haflidason|first=Almar|title="Blood and Black Lace"|publisher=BBC|accessdate=2006-07-22] , aka “DVD Savant”, noted “Bava probably didn't mean to invent a subgenre with "Blood and Black Lace", a murder story which forgoes the slow buildups and character development of previous thrillers to concentrate almost exclusively on the killings themselves.” [cite web|url=http://www.dvdtalk.com/dvdsavant/s172bava.html|last=Erickson|first=Glenn|title=The Whip And The Body, Blood and Black Lace, Kill, Baby... Kill!|publisher=DVD Savant|accessdate=2006-07-22] In "", Fernando F. Croce stated “The roots of the Hollywood slasher are often traced back to "Blood and Black Lace", yet Mario Bava's seminal "giallo" has a richness of texture and complexity of gaze that have kept its elaborate carnage scintillating even following decades of leeching from genre vultures.” [cite web|url=http://www.slantmagazine.com/dvd/dvd_review.asp?ID=807 |last=Croce|first=Fernando|title="Blood and Black Lace"|publisher=Slant Magazine|accessdate=2006-07-22] Nathaniel Thompson commented on his "Mondo Digital" review website: “A stripped down, delirious tour of a candy-colored murder zone, this was really the first film to merge the fashion world with ritualistic murders, and none of its imitators have managed to capture the same level of intensity." [cite web|url=http://www.mondo-digital.com/bava3.html |last=Thompson|first=Nathaniel|title="Blood and Black Lace"|publisher=Mondo Digital|accessdate=2006-07-22]

Bava’s mixture of eroticism and violence would prove a potent template for both the giallo and the slasher film. Tim Lucas has written that "Blood and Black Lace" was "one of the most influential thrillers ever made" and "the first authentic 'body count' movie."