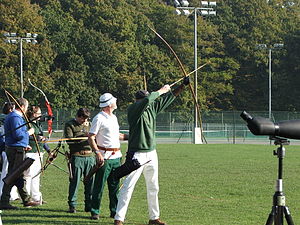 Clout is a form of archery in which archers shoot arrows at a flag (known as "the Clout") from a relatively long distance and score points depending on how close each arrow lands to the flag.

Scoring zones are defined by maximum radii from the flag pole. Each arrow scores points depending on which scoring zone it enters the ground in. An arrow embedded in the flag pole is counted as being in the highest scoring zone. If an arrow is lying on the ground, it is considered to be in the scoring zone in which its point lies.

The scoring zones may be marked on the ground. Where this is not practical, a non-stretch rope or chain marked with the radii of the scoring zones is attached to the flag pole and swept around it to determine which arrows are in which zones.

A designated person collects the arrows in each zone, sorts them into sets, and lays them on the ground. Each archer in turn points to his or her arrows and calls out the scores in descending order. 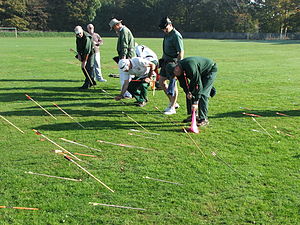 The GNAS version of clout is used in the United Kingdom. The information in this section is drawn from Part 7 Clout Shooting of the Grand National Archery Society's Rules of Shooting. (GNAS 2008)

Flags are set at specified distances for combinations of age and gender. The archer's bow type does not affect the distance the archer shoots.

Each flag consists of a 12" square piece of coloured fabric on a short softwood pole, the flag to be as close to the ground as is practical.

A minimum overshoot is required behind each set of flags.

Most GNAS clout shoots are one-way.

Each arrow scores points depending on which scoring zone it lands in. Scoring zones are defined by maximum radii from the flag pole.

The British Long-Bow Society has its own form of clout shooting. The Society restricts the archers to the use of English longbows and wooden arrows.

At the Woodmen of Arden's traditional shoots, the 'marker' at the target end steps from behind his screen, lies on his back and waves his top hat in the air to signify that a clout has been scored.

The FITA version of clout is used worldwide. The information in this section is drawn from Book 5 Miscellaneous of the FITA Constitution and Rules. (FITA 2008)

Flags are set at specified distances for combinations of gender and bow type.

The FITA rules do not define any separate distances for juniors or for longbows, though tournament organisers will often introduce such additional distances.

Each flag consists of a piece of coloured fabric not exceeding 80 cm high and 30 cm wide on a softwood pole, the flag to be no more than 50 cm from the ground.

Shooting may only be "one way".

Several possible shooting distances are defined. The archer selects the distance he or she wants to shoot, though for record purposes only certain combinations of age, gender, bow type and distance are recognised.

The same flag may be used for archers shooting at different distances. A shooting line is set up for each distance and the shooting is staggered so that each distance is shot in turn.

Each flag consists of a point-down triangular piece of coloured fabric not exceeding 45 cm high and 35 cm wide at its widest point on a softwood pole, the flag to be 8 cm from the ground. Smaller flags are placed on each side of the clout at 1.5 metre intervals, such that the archers can see where the outer edges of the even-numbered scoring zones are.

Shooting may only be "one way".