It Came from Outer Space

It Came from Outer Space 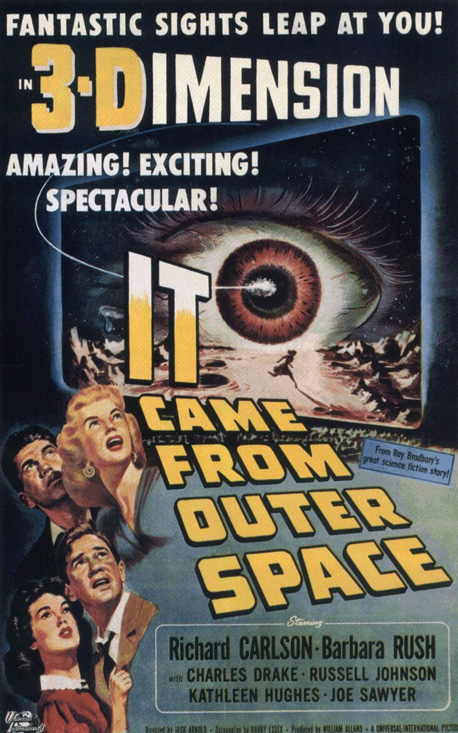 "It Came from Outer Space" is a 1953 Science Fiction 3-D film directed by Jack Arnold, and starring Richard Carlson, , and .

Author and amateur astronomer John Putnam (Carlson) and schoolteacher Ellen Fields (Rush) watch a great meteor crash to earth near the small town of Sand Rock, Arizona. After visiting the crash site, John Putnam notices a strange object at the impact site, and comes to believe the meteor is not a meteor at all, but an alien spaceship. After a landslide covers the mysterious craft, John Putnam's story is ridiculed by the townspeople, the sheriff (Drake), and the local media. Even Ellen is unsure of what to believe at first, but soon agrees to assist John in further investigation. In the following days, several local people disappear. A few return, only to display odd robot-like behavior, and seem distant and removed from their normal selves. Eventually Sheriff Drake also becomes convinced that something more than a meteor is involved, and organizes a posse to root out and destroy the invaders. All alone, John hopes to reach a peaceful solution, entering a mine which he hopes will lead him to the buried spacecraft and its mysterious occupants.

It develops that the aliens are benign beings whose spacecraft has crashed due to malfunctioning components. Their plan is to stay on Earth long enough to replace them, then continue on their voyage. They temporarily control a few humans since they would not be able to mingle inconspicuously with people, and they realize that humans would panic on seeing them. Upon their departure, all returns to normal on Earth.

The screenplay was by , with input by Jack Arnold, and was derived from an original screen treatment by . Unusual among sci-fi films of the day, the alien "invaders" were portrayed as creatures without malicious intent. The film has been interpreted as a metaphorical refutation of xenophobic attitudes and ideology of the .

"I wanted to treat the invaders as beings who were not dangerous, and that was very unusual", Bradbury said. He offered two outlines to the studio, one with malicious aliens, the other with benign aliens. "The only other film like it was "The Day the Earth Stood Still", two years before. These two films stand out as treating creatures who understand humanity. The studio picked the right concept, and I stayed on." [cite book
first = Sam
last = Weller
title = The Bradbury Chronicles
location =
publisher = HarperCollins
year = 2005
pages = 191
id = ISBN 0-06-054581-X ] He has called the movie "a good film. Some parts of it are quite nice." [cite book
first = Ray
last = Bradbury
title = Conversations With Ray Bradbury
location =
publisher = University Press of Mississippi
year = 2004
pages = 60
id = ISBN 1-57806-641-7 ]

In 2004, Bradbury published four versions of his screen treatment for the movie as a single volume, "It Came From Outer Space".

* [http://movies2.nytimes.com/mem/movies/review.html?title1=&title2=It%20Came%20From%20Outer%20Space&reviewer=A.%20W.&v_id=25499&pdate=19530618 The New York Times said] : ""It Came From Outer Space" burst into Loew's State yesterday with a bang and went out with a whimper".
* [http://www.timeout.com/film/76242.html Time Out London said] : "The script (nominally from Ray Bradbury's story The Meteor) rattles through all the formulary cliché".
* [http://www.qnetwork.com/?page=review&id=924 QNetwork Film Desk said] : "Like many sci-fi films of the 1950s, It Came From Outer Space has a clear metaphorical imperative, turning the popular and comforting "us vs. them" dichotomy on its head by questioning the us"..
* [http://homevideo.about.com/library/weekly/aafpr050902.htm About Entertainment said] : "Depending on who you talk to, "It Came From Outer Space" (1953) is either a science fiction classic or a campy B-movie".
* [http://www.digitallyobsessed.com/showreview.php3?ID=3486 Digitally Obsessed said] : "It isn't perfect, but it captures the mood and atmosphere of 1950s fantasy quite well; you can practically feel the yellowed pages of a pulp novel being turned as the scenes roll by".
* [http://www.filmcritic.com/misc/emporium.nsf/ddb5490109a79f598625623d0015f1e4/46850e0f44303f4388256baf007d3952?OpenDocument Film Critic said] : "It moves terribly slowly (despite an 80 minute running time) because the plot is overly simplistic with absolutely no surprises".

*Urban legend has it that an extra in an army corporal's uniform at the "meteor" crash site is comedy writer-performer . While the briefly-glimpsed man does indeed resemble Amsterdam, no hard evidence (e.g. cast call bureau records, interviews with Amsterdam) have ever confirmed it is actually he, nor would it make sense that, at that stage of his career he would have needed hourly-wage work on the one hand or that he was a science fiction fan "groupie" on the other. Therefore, all claims asserting that Amsterdam actually had a part in the picture amount to nothing more than an .
*The uncredited music in the film was by , , and .
*The setting and the telephone lineman occupation of two of the characters are elements from Bradbury's younger life, when his father moved the family to Tucson.
*Barbara Rush won the Golden Globe award in 1954 as most promising female newcomer in the 3-D hit "It Came from Outer Space".
* The Universal make-up department submitted two alien designs for consideration by the studio executives. The design that was rejected was saved and then later used as the Mutant in Universal's "" (1955).
*The special effects created for the spacecraft in flight consisted of a wire-mounted tennis ball, coated with incendiary chemicals.
* "It Came from Outer Space" is one of the many classic movies mentioned in the opening theme ("") of both the stage musical "" and its motion-picture counterpart, "".
* The narration in the song "92 Degrees" from the 1986 album "Tinderbox" contains dialog from this movie. [http://kennelco.com/film_diary/2006/07/]
*Ranked #92 on Rotten Tomatoe's Journey Through Sci-Fi (100 Best-Reviewed Sci-Fi Movies)
*This film is mentioned by Para-Medic in the video game after Naked Snake decides to save the game.