Martinus Christian Wesseltoft Rørbye (17 May 1803 – 29 August 1848) was a Danish painter, known both for genre works and landscapes. He was a central figure of the Golden Age of Danish painting during the first half of the 19th century.

The most traveled of the Danish Golden Age painters, he traveled both north to Norway and Sweden and south to Italy, Greece and Constantinople. He was also the first Danish painter to take to painting in Skagen at the northern top of Jutland, almost half a century before the thriving community of Skagen Painters formed and came to fame.

Martinus Rørbye was born in Drammen in Norway to Danish parents Ferdinand Henrik Rørbye and his wife Frederikke Eleonore Catherine de Stockfleth. His father was a warehouse manager and later Superintendent of War, and had moved the family to Norway shortly before Martinus' birth. The family returned to Denmark when Martinus was 12 years old, shortly after the cession of Norway from Denmark in 1814.

Martinus was not inclined to schooling, but in 1820 started his studies at the Royal Danish Academy of Fine Arts at 17 years of age. He studied under Christian August Lorentzen and Christoffer Wilhelm Eckersberg, a strong influence on a generation of artists during the Danish Golden Age. Rørbye was a favorite student of Eckersberg, and they formed a close association. He took to Eckersberg’s careful attention to nature and his strivings to capture details realistically. He was also greatly influenced by Lorentzen’s use of color. 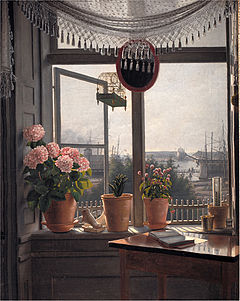 View from the Artist's Window, painting by a young Rørbye around 1825, heralding the many travels he would later make with its depiction of a caged bird in an open window, on the border between the safety of his parents' home and the wide, unknown world represented by a berthed ship

Rørbye first exhibited his paintings at Charlottenborg in 1824 and would do so almost every year until 1848. His works were modestly priced, and he found sufficient buyers for his pieces. The majority of his works in the 1820s consisted of views from Copenhagen and the island of Zealand, although he also painted a number of portraits including one of Lorentzen, his painting instructor.

Twice, in 1830 and 1832, he traveled to Norway. On the first of these of these journeys he visited Jutland on the way, a rare destination for painters at that time. On 31 May 1830 he went to Århus on the paddle steamer Dania. Another passenger on the ship was Hans Christian Andersen and the two artists decided to travel together for a wwhile. From Århus they went north, staying at the Rosenholm, Clausholm and Tjele estates.[1] After that, Rørbye and Andersen parted with Rørbye, continuing to the remote and seldom-visited Thy province of north-western Jutland to visit relatives in Thisted. From his journals it is obvious that he found the place deeply exotic, making detailed sketches and notes of everything from women's costumes and markets to the scenery. However, he found the landscape unsuitable for painting due to the lack of trees. On 7 July he left Thisted bound for Norway.[1]

In Norway he painted landscapes under the influence of Johan Christian Dahl and Caspar David Friedrich. 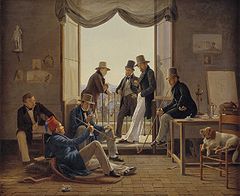 A company of Danish artists in Rome, painted by Constantin Hansen. Rørbye is number two from the left sitting behind Bindesbøll who is lying on the floor with a fez he often wore after their visit to Constantinople. Also appearing in the picture are the painter himself, Marstrand, Küchler, Blunck and Jørgen Sonne

In 1834 Rørbye received a travel scholarship from the Academy on account of his talents as a portraitist. He traveled by way of the Netherlands and France to Rome, In Paris he met Peter Andreas Heiberg, August Bournonville and the French painter Jean Auguste Dominique Ingres.

When he arrived in Rome, he joined the city's thriving Danish artists community which had Bertel Thorvaldsen as its central figure. In Italy he traveled to Sorrento, the Sabine Mountains, and Sicily.

The following year Rørbye traveled to Athens accompanied by the architect Michael Gottlieb Bindesbøll, one of the compatriots he had met in Rome. From there they continued to Constantinople in the Ottoman Empire, a rare adventure in those days. He sketched prodigiously during his travels.

In 1837 he returned home to Copenhagen. His excellent orientalist studies from these exotic locales brought him the Danish public’s attention. The Academy, recognizing the excellence of his work during his travels, invited him to apply for membership by submitting a painting. His task was to create a Turkish folk scene. His motif came from a study of a Caravan near Snyrna. It was finished in 1838 and he was unanimously voted into the Academy. His studies from Greece and Turkey continued to serve as the basis for his creative output. In this regard he admired the work of French painter Horace Vernet. 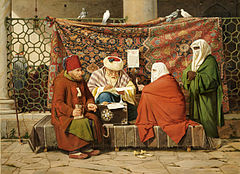 That same year at the Spring Exhibition he received the Exhibition Medal, the first time it had been given out, for a painting of a scene outside the Kılıç Ali Pasha Complex, A Turkish notary witnesses a marriage contract. Typical of Rørbye are the rich colours and careful attention to detail.[2]

He married Rose Frederikke Schiøtt on August 29, 1839. His health was not good, however, and that same autumn he traveled again to Italy in the hope of renewing his strength. He painted "Torvet i Amalfi" ("The plaza in Amalfi") during this stay, and it was exhibited in 1842. He returned home again in 1841.

He gave private painting lessons to Christen Dalsgaard, and in 1844 became professor at the Academy’s school of modelling. His health deteriorated, and he died on March 29, 1848 in Copenhagen, leaving his young wife widowed and with several small children. She exhibited twelve of his paintings, mostly of Italian subjects, in 1849. 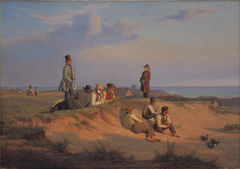 Men of Skagen on a summer evening in fair weather, one of Rørbye's last paintings, painted in Skagen in 1848

Rørbye visited Skagen on three occasions, painting the local fishermen and the North Sea environs. The first time was in 1833, the year before he set out on his travels to the Mediterranean area and almost half a century before the community of Skagen Painters formed in the town and came to fame. He returned to Skagen towards the end of his life, in the summers of 1847 and 1848. His painting of Men of Skagen on a summer evening in fair weather was one of the last he completed.

He was one of the most traveled of the Golden Age painters, and distinguished his artistic production by his interpretations of lands rarely explored at that time for their artistic motifs, as well as for his anecdotal genre paintings depicting the Copenhagen of his day.

His works appear in a number of Danish art museums, including the Danish National Gallery (Statens Museum for Kunst), the Ny Carlsberg Glyptotek, and the Hirschsprung Collection.