pronunciation (help·info) (currently the historical name Sohra is more commonly used; alternative spellings are Cherrapunjee and Charrapunji), is a subdivisional town in the East Khasi Hills district in the Indian state of Meghalaya. It is credited as being the second wettest place on Earth. However, nearby Mawsynram currently holds that record.

It is the traditional capital of a hima (Khasi tribal chieftainship constituting a petty state) known as Sohra or Churra.

The original name for this town was Sohra, which was pronounced "Churra" by the British. This name eventually evolved into the current name, Cherrapunji. The word "cherrapunji" means 'land of oranges'. Despite perennial rainfall, Cherrapunji faces an acute water shortage and the inhabitants often have to trek for miles to obtain potable water.[1] Irrigation is also hampered due to excessive rain washing away the topsoil as a result of human encroachment into the forests. The Meghalaya state government has renamed Cherrapunjee back to its original name, "Sohra". There is a monument to David Scott (British Administrator in NE India, 1802–31) in the Cherrapunji cemetery. The history of the Khasis - the inhabitants of Cherrapunji - may be traced from the early part of the 16th century. Between the 16th and 18th centuries these people were ruled by the syiems (rajas or chiefs) of Khyrtim in the Khasi hills. The Khasi hills came under British authority in 1883 with the submission of the last of the important syiems, Tirot Singh.

The main pivot on which the entire superstructure of Khasi society rests is the matriarchal system.

Soils on the plateau are poor due to deforestation and washout caused by heavy rains. Due to winter droughts the vegetation in this location is even xerophytic in spite of the fame of Cherrapunji as extremely wet place. Additional pressure on local ecosystems is created by rapid increase of population - from a Sohra area population of 7,000 in 1960, it grew to over 100,000 by 2000.[2].

Valleys around Cherrapunji however are covered with lush and very diverse vegetation, containing numerous endemic species of plants, including Meghalaya subtropical forests.

The shillong plateau is an uplifted horst-like feature,bounded between the E-W Main Boundary Thrust(MBT) to the North,N-S jamuna fault in the west and NW-SE kopilli fracture zone in the east. 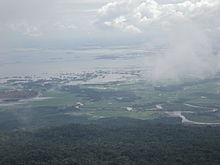 View of Bangladesh plains from Cherrapunjee

Cherrapunji has a mild subtropical highland climate (Köppen Cwb), with monsoonal influences typical of India. The city's yearly rainfall average stands at 11,777 millimetres (463.7 in).[3] This figure places it behind only nearby Mawsynram, Meghalaya, whose average is 11,873 millimetres (467.4 in). Cherrapunji receives both the Southwest and Northeast monsoonal winds, giving it a single monsoon season. It lies on the windward side of the Khasi Hills, so the resulting orographic lift enhances precipitation. In the winter months it receives the northeast monsoon showers which travel down the Brahmaputra valley. 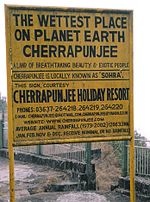 Cherrapunji is the wettest place on Earth 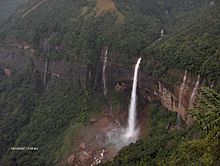 Cherrapunji receives rains from the Bay of Bengal arm of the Indian summer Monsoon. The monsoon clouds fly unhindered over the plains of Bangladesh for about 400 km. Thereafter, they hit the Khasi Hills which abruptly rise out of the plains to reach a height of about 1370 m above mean sea level within of 2 to 5 km. The geography of the hills with many deep valleys channels the low-flying (150–300 m) moisture-laden clouds from a wide area to converge over Cherrapunji. The winds push the rain clouds through these gorges and up the steep slopes. The rapid ascent of the clouds into the upper atmosphere hastens the cooling and helps vapours to condense. Most of Cherrapunji's rain is the result of air being lifted as a large body of water vapour. The extremely large amount of rainfall at Cherrapunji is perhaps the best-known feature of orographic rain in northeast India.

Occasionally, cloudbursts can occur in one part of Cherrapunji while other areas may be totally or relatively dry depicting high spatial variability of rainfall. Atmospheric humidity is extremely high during the peak monsoon period.

The major part of the rainfall at Cherrapunji can be attributed to the orographic features. When the clouds are blown over the hills from the south, they are funneled through the valley. The clouds strike Cherrapunjee perpendicularly and the low flying clouds are pushed up the steep slopes. It is not surprising to find that the heaviest rainfalls occur when the winds blow directly on the Khasi Hills.

A notable feature of monsoon rain at Cherrapunji is that most of it falls in the morning. This could be partly due to two air masses coming together. During the monsoon months, the prevailing winds along the Brahmaputra valley generally blow from the east or the northeast, but the winds over Meghalaya are from the south. These two winds systems usually come together in the vicinity of the Khasi Hills. Apparently the winds that are trapped in the valley at night begin upward ascent only after they are warmed during the day. This explains, partially, the frequency of morning rainfall. Apart from orographic features, atmospheric convection plays an important role during the monsoon and the period just preceding it.

The locals living in and around Cherrapunjee are known as Khasis. It is a matrilineal culture. After the wedding, the husband of the youngest daughter goes to live with his wife's family who ownes the property of the family while others live on their own getting a bit of the share. The children take on the surname of the mother.[8]

Cherrapunji is also famous for its living bridges. Over hundreds of years the people in Cherrapunji have developed techniques for growing roots of trees into large bridges. The process takes 10–15 years and the bridges typically last hundreds of years, the oldest ones in use being over 500 years old.[9] 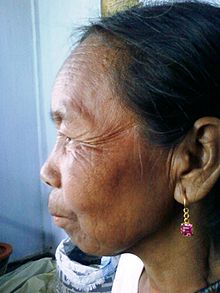 A Khasi woman from Cherrapunji